Human rights, the conflict in Ukraine and the need for an agreed upon history in the United States were among the topics discussed Thursday night in the Wool Ballroom during the 22nd Annual Sam and Marilyn Fox Atlas Week Signature Symposium. 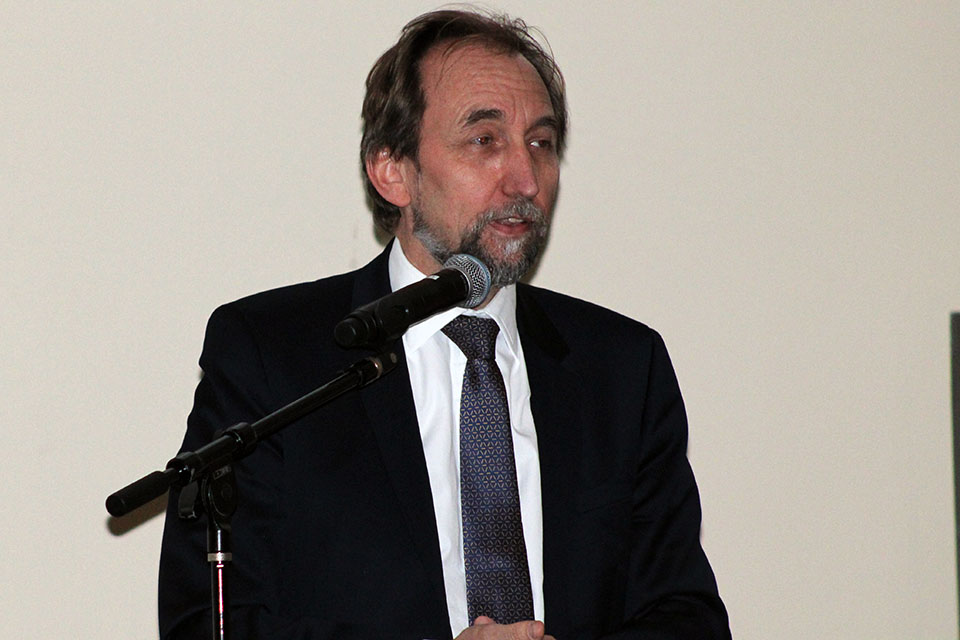 Al Hussein opened the address by talking about the ongoing conflict in Ukraine. He pointed out the reports of possible war crimes by Russian soldiers in places like Bucha and compared it to similar events in the past from Syria and Bosnia.

Al Hussein called Russian President Vladimir Putin “brazen” and “odious” for his unlawful advances into Ukraine. He said Russia, being a country with nuclear weapons, poses a danger.

“When confronting him, we must tread carefully,” he said. “. . . His narrative must be overturned skillfully and with due care.”

Al Hussein then shared a personal story about his grandfather. In Syria in 1920, citizens were upset by the decision of the king to surrender to the French army. Protests started and, at one point, a man drove to the crowd of protesters, pulled a gun and fired at the crowd. The gunman was his grandfather, the brother of the king.

“I would like to believe he did not kill anyone, especially unarmed civilians — that he fired over their heads that he was only defending his brother and himself,” he said. “No one in my family knew about it until very recently, not even by way of whispers. It’s surprising. Why, I ask myself, wasn’t there a call for his prosecution?”

Al Hussein said it was difficult to confront the actions of his ancestors. He noted that children of murderers are not murders and it is unwise to made to feel guilty. Instead, it’s up to everyone to learn from the past and move forward in a positive way. It is important, he said, to confront the demons in our past.

“We all have a duty to learn from the past — to provide remedy wherever we can and pledge ourselves to never see those actions repeated,” he said.

History was a key point of Al Hussein’s remarks. He lamented the trend of “history of endless debate.” Some things, like dates, are treated as facts. Others, like motivations, are often debated and that debate “too often focuses on the details and obscures things.”

This line of thinking led Al Hussein to focus on the United States. He talked about the recent protests about police brutality following the deaths of people like George Floyd. Those were protests for civil rights he said and to address injustices.

The United States, Al Hussein said, operates outside the human rights framework like much of the rest of the world. He said Americans are aware of civil rights and rights for women, but less so about human rights.

To address this, and to help address the injustices that have spurred protests, he suggested it would make sense for the U.S. to join United Nations’ human rights treaties. He also encouraged human rights to be incorporated into the educational curriculum.

Al Hussein also suggested the United States needs to settle its history. He noted that “too many Americans are seemingly in disagreement over what is a common past.” He proposed a non-political commission on history and race to provide a framework for how to learn from the past and move forward.

Following his remarks, Al Hussein took a few questions from the gathered crowd and some questions submitted from those watching on Zoom.