Saint Louis University students are back on campus and the possibilities are endless.

The fall 2022 semester officially began Wednesday, Aug. 24. New students headed to class, away from home for the first time and ready to start their college journey. Returning students reconnected with old friends, made new ones and continued their path toward graduation. Professors met a new batch of students eager to learn and ready to take on the world. 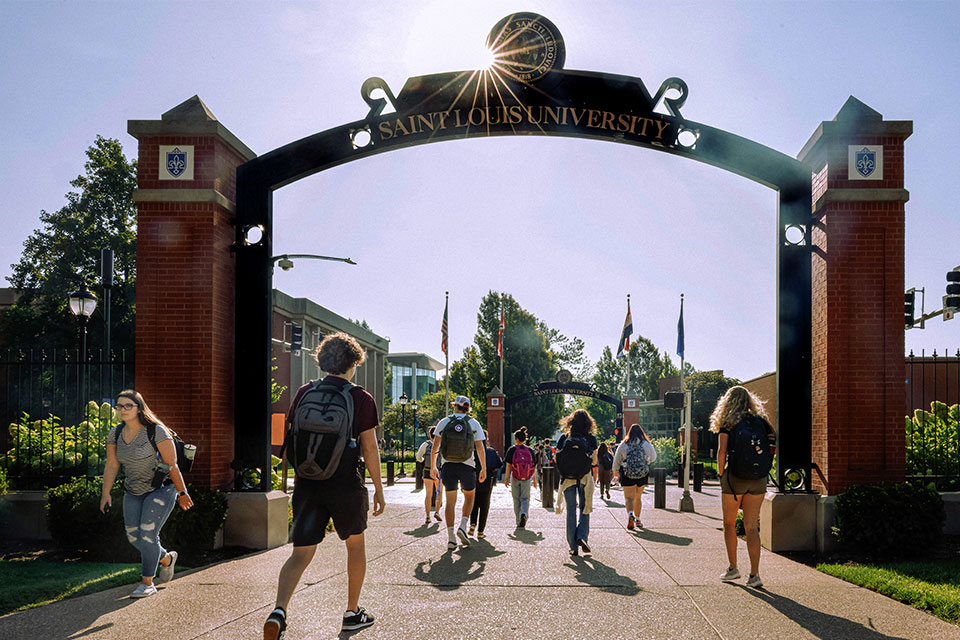 Students walk to class on the first day of the new semester at SLU. Photo by Sarah Conroy.

Freshman Vedaantt Mohanty is still getting his bearings.

The St. Louis native had a busy first day of classes with three lectures on his schedule. Additionally, Mohanty said he was still exploring SLU’s campus and finding his way from academic building to dining halls and more.

“The first day is exciting, but also a little scary,” Mohanty said. “Earlier today, I went to the wrong classroom, but it’s still fun because I get to explore the area and see where everything is.”

SLU was always a dream for Mohanty, but he wasn’t sure if it was ever going to be a possibility. But once he received his acceptance letter into SLU, there was no other choice.

“I did not expect I would be able to go here,” Mohanty said. “But then, after being accepted, my family and I said ‘Yeah, let’s do it.’”

“Biology’s the study of life,” Mohanty said. “I’ve always been interested in it. It's fascinating because you get to understand how everything works in a living being.”

Now, despite his parents’ house being just a few short miles away, SLU is his new home. Having his family so close to home is comforting, knowing he’s not truly by himself, but he’s excited to be able to live on his own and to make new friends and new experiences.

“I’m just excited for the journey,” Mohanty said. “The journey of how my studies will go and how fun things will be in the future.”

For sophomores Jenna Scarborough and Anabelle Zeller in the Trudy Busch Valentine School of Nursing, Wednesday is when they truly felt like nursing students. After a year of hybrid learning and core classes, their first class of the new year involved hands-on learning in the medication lab.

Nursing students in the medication lab started out their semester by learning how to properly crush and cut pills, measure liquid medicine, and how to draw medicine into a syringe. The hands-on learning also came at a price in the form of quizzes.

“Two quizzes on the first day, it just shows they’re not messing around,” Scarborough said.

“Even for being a two-hour class on the first day, I wasn't bored,” Zeller said. “I was really intrigued and interested by all the information that we were learning and having to apply it.”

Being back on campus felt different, Scarborough said. Coming back as a sophomore after a year spent learning where everything is and establishing friendships, SLU it felt like home, even more so than her actual home.

“I was so excited to be back on campus this week,” Scarborough said. “The second I went home, I already wanted to be back. So to be here again, it’s incredible, especially to be doing hands-on learning, because I’ve been looking forward to doing that since I was a freshman in high school.”

For nursing students, sophomore year is a big jump; gone are the days of primarily core classes. As sophomores, students dive into nursing-specific classes and get a true feel for what the profession will be like following graduation a few years later. That’s exactly what both Scarborough and Zeller were looking forward to.

“I’ve been looking forward to the hands-on experiences and clinicals that are coming,” Zeller said. “I can’t wait to get into the hospitals and see and experience what I’m going to be doing for the rest of my career.”

Thankfully, the first classes have lived up to the anticipation of the past few months.

As a senior, Isa Baca knows what many of her younger peers are feeling; she was just like them a few years ago. Entering her fourth year of the five-year Occupational Therapy program, Baca is finishing up her undergraduate studies while also taking master-level classes.

Baca is especially excited about getting into what she calls “the nitty-gritty” of OT classes. Like her nursing counterparts, it’s very hands-on learning, specializing in different aspects and techniques of occupational therapy.

Baca has yet to pick a specialization as she has interests in both geriatric and pediatric occupational therapy. She knows she has time though, and that she can just enjoy the ride for now.

“I'm excited to be back with friends and soak up that last bit of time when all of my friends are here at once,” Baca said. “SLU does so many fun things for seniors, so I’m really looking forward to this year.”

For Baca, the “real world” she'll jump into after graduation is starting to take shape, but she is excited to have one more year with her closest friends. Even though she has two more years at SLU, many of her friends will be graduating in May, which has made her sentimental and reflective as she steps onto campus for her senior year.

“Coming here to SLU was a whole new experience for me,” Baca said. “I hadn’t been this far away from home for this long. It was so great to just dive into a new city and a new state, and I felt so welcomed and included when I got here. SLU attracts a certain type of person and everyone is so excited to be here.”

Students aren’t the only ones who have been looking forward to the new school year — professors across the University have been waiting for this day all summer.

Earth and Atmospheric Sciences professor John Encarnacion, Ph.D., said he was looking forward to being back in class with first-year students.

Encarnacion kicked off his semester with Introduction to Solid Earth, which helps fulfill a science requirement in the core curriculum. As such, his class is filled with students with many different interests, not just those studying environmental science.

“I have this great feeling of responsibility,” Encarnacion said. “This may be the only science class they may take. So I'm trying to make it exciting for them. For some of them, this is the very first class they're taking at SLU, so you got to have a good first day for them to be entertained. The best way to share one's love of science with another person is to share why I love science, and hope they can develop that same level of appreciation.”

Encarnacion spent most of the class walking students through the topics they will cover, along with some of the amazing places he has been able to travel to as part of his studies, which include his native Philippines, China, Madagascar, Iceland, Antarctica and more.

Even on the first day, Encarnacion made a mark, as sophomore Kiara Rameriz, taking the class as part of her civil engineering degree, was excited about what the rest of the class will look like this semester.

“I really liked the class so far,” Ramirez said. “Dr. John has a great attitude, he seems like he’s a very social person. Seeing all the experiences he’s had, I think this is going to be a very fun class.”

Karen Cuvar, Ph.D., associate professor in the Trudy Busch Valentine School of Nursing, also is a firm believer in making the first day of classes enjoyable for everyone, which is why she had her students participate in hands-on learning on day one. She also gave them a tease, mentioning next week will be her favorite lab of the entire semester.

“Nursing is a very experiential kind of learning, and it’s a very caring, compassionate profession,” Cuvar said. “We strongly believe we have to make caring and compassionate nurses, so we have to teach them the skills to do that. We give them a variety of teaching methodologies, and then we follow it with the hands-on component. It gets them all excited because we’ve just spent a year of textbook learning, but now, they feel like this is one step closer to being a ‘real nurse.’”

Leading the medication lab, Cuvar was excited to be back on campus because students share her optimism for the upcoming semester. Around the School of Nursing, many students were experiencing the building for the first time, and seeing them explore and get excited about their major radiates throughout the halls.

Being an instructor, Cuvar gets to work week in and week out with students as they pursue their dreams, struggling and succeeding in the classroom and in internships. One of her favorite parts is the “aha” moment students get when they finally understand a topic or can successfully complete an assignment they were struggling with, something that has already happened on day one.

“I’m excited to see the students thrive in this course and to see them practice skills they’ve never done before,” Cuvar said. “They’ll seem uncertain or unsure about a topic and then suddenly, the light bulb comes on. You can see it on their faces, and that moment is the best feeling. They struggle and then over time, you see them start to put all the pieces together, and they go from fumbling fingers and nervous to ‘I got this.’ That moment is such a special moment for me as an instructor and it never gets old.”

With students back on campus, SLU is hustling and bustling. There’s activity everywhere, with new possibilities around every corner.

It’s good to be back.