John W. Padberg, S.J., former history professor at Saint Louis University and director of the Institute of Jesuit Sources, died Dec. 25, 2021. He was 95.

Padberg was born May 22, 1926, in St. Louis. He served as a Jesuit for 77 years and a priest for 64. He entered the Missouri Province of the Society of Jesus after graduating from St. Louis University High School in 1944. 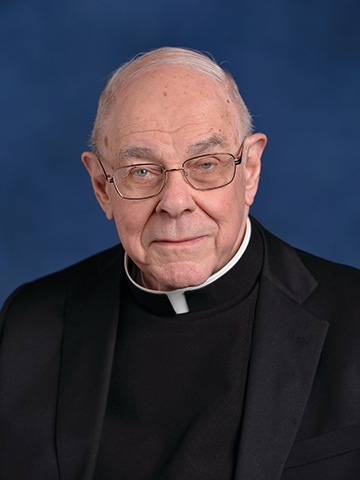 Padberg joined the SLU faculty in 1964 as a professor in the history department. He then became the university’s academic vice president. Father General Pedro Arrupe, S.J., missioned Padberg as the first president of the Weston School of Theology, Cambridge, MA in 1975. In 1986, he became the director and editor of the Institute of Jesuit Sources, a position he held until 2002. He also served as the Rector of Jesuit Hall and as a trustee of Saint Louis University. He was awarded an honorary doctorate from SLU t in 2017.

In addition to his time at SLU, Padberg also taught at St. Louis University High School.

“To remember John’s many accomplishments is appropriate, of course,” said David Suwalsky, S.J., vice president of Mission and Identity at SLU. “He was a notable author and a gifted administrator. But he will also be remembered for his preaching at the College Church, his urbane conversation and his deep and abiding affection for his Jesuit brothers and his many, many friends. John died peacefully in the presence of his Jesuit brothers after a long life very well lived.”

Services will be Thursday, Jan. 13, at St. Francis Xavier College Church. Visitation will begin at 4 p.m. with Mass starting at 7:15 p.m.

Read a full obituary from the Central and Southern Province of the Society of Jesus and a remembrance of Padberg’s work by John W. O’Malley, S.J., professor emeritus of theology at Georgetown University.