When Lizzie Bannon (Arts & Sciences, ’23) was younger, she was terrified of thunderstorms.

But thanks to a class assignment, Bannon’s fears turned into fascination. 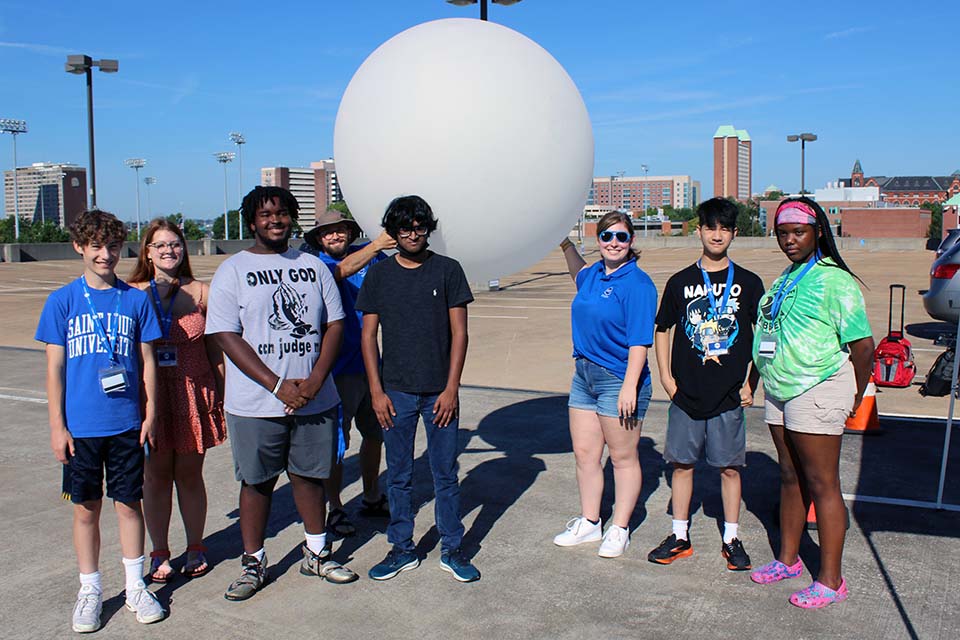 Attendees at the Earth, Wind and Water camp pose for a picture with a weather balloon. One of the events at the camp involved launching weather balloons and studying the data. Photo by Joe Barker.

So, when she organized and led a meteorology summer camp at Saint Louis University, she knew she’d come a long way in overcoming from her younger self’s fears.

“I researched them for a school project and thought they were really cool and interesting,” Bannon said. “And then after watching storm chasing videos, I knew this is what I wanted to do, be a weather scientist. I wanted to help other kids find this interest in the weather, so that’s why we started the Earth, Wind and Water camp.”

By high school, Bannon was dead set on attending a meteorology camp. But camp at Oklahoma or Penn State, which attracts thousands of weather enthusiasts from across the country, was much too large for her comfort level, and she wanted more hands-on learning.

She enrolled in a camp at Saint Louis University, but with just two campers signed up, it ultimately had to be canceled.

But now, five years later, Bannon was finally able to attend camp. She didn’t just attend it though; she ran it.

Bannon and fellow meteorology student Victor Geiser (Arts & Sciences, ’24) led the first Earth, Wind and Water Camp at SLU this July, which allowed high school students to spend three days on campus and learn from faculty members and experts in the field.

During the three days, campers dove headfirst into weather-related topics, such as learning how to forecast weather and examining how weather models are created, speaking with local meteorologists, visiting the St. Louis Science Center and more.

“One of the highlights so far was the WATER Institute,” Bannon said. “They put on some fantastic events for these kids. Everyone loved it.”

In high school, Bannon wanted hands-on learning opportunities. To bring that element to the camp, the Earth, Wind and Water participants launched a weather balloon from the roof of the Olive-Compton parking garage. Attached to the balloon was a radiosonde, a device used to collect different data points from different levels of the atmosphere. Associate professor of meteorology Bob Pasken, Ph.D., led the campers in configuring the radiosonde to receive these data points and walk them through how the devices worked in correlation with each other.

“We launched the weather balloon and radiosonde, which measures the vertical profile of the atmosphere,” Bannon said. “Meteorologists can then use it to analyze the probability of storms, temperature, dew point, pressure, things like that. All that info comes in in real-time, and then eventually, the balloon will reach a certain pressure and pop.”

The camp launched a weather balloon on the morning of July 13, and then again in the evening to compare and contrast what the weather looks like at different parts of the day and how those data points can change.

“We take all of this data, and then we can make all sorts of calculations and models on areas like the state of the atmosphere, which can help forecasters in the future,” Geiser said.

For Bannon, the Earth, Wind and Water Camp was a culmination of hard work throughout her time at SLU but also a fulfillment of a dream she had when she was the age of her campers.

The Earth, Wind and Water Camp was a hit throughout the meteorology department, so much so Bannon is already thinking about what they can do next year and how to bring in different scientific areas, such as environmental sciences.

Though Bannon will be graduating this upcoming spring, she hopes to continue to work on the Earth, Wind and Water Camp and see it grow and allow more kids to fall in love with the weather.

“I think the best thing we can do is just ignite a passion for weather,” Geiser said. “We want them to explore at their own pace and find what they think they want to do with the field and the industry. Get them thinking like scientists.”

“I've been planning this camp for three years,” Bannon said. “I really wanted to be here and get this camp off the ground. I wanted to get to know the first generation of kids who would be attending, and hopefully they’re the first of many more to come to the Earth, Wind and Water Camp. We’re already thinking about next year.”