ST. LOUIS — Travis Threats, Ph.D., an accomplished speech-language pathologist at Saint Louis University, was recently named a recipient of the Honors of Association from the American Speech-Language-Hearing Association (ASHA). It is the national organization’s highest honor.

The award recognizes recipients’ exceptional contributions that have enhanced or altered the course in the field of speech, language and hearing sciences throughout their careers. In an association of more than 218,000 professionals, only a select number of individuals each year receive this prestigious award. 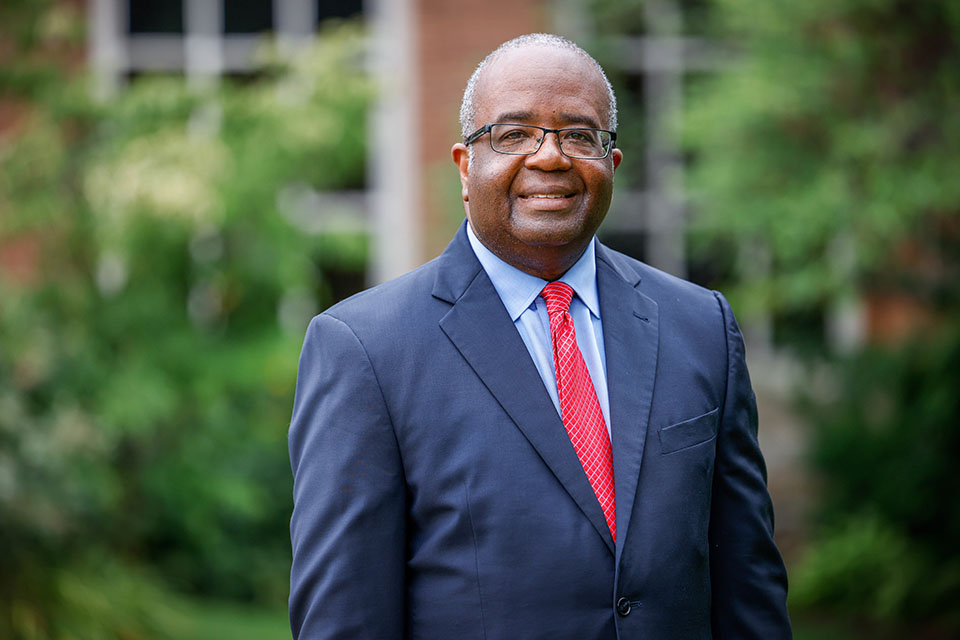 Travis Threats, Ph.D., was recently named a recipient of the Honors of Association from the American Speech-Language-Hearing Association. Photo by Sarah Conroy.

Nominees for the award are nationally and internationally known in their field for innovative clinical practice, insightful and rigorous research, creative administration, effective legislative activity, outstanding teaching, or other distinguished professional contributions.

ASHA Fellow Bernard Rousseau, Ph.D., dean of SLU’s Doisy College of Health Sciences, who recently served as a Chair and Member of the Committee on Honors of ASHA, says Threats’ contributions have had a significant impact on the professions of speech, language and hearing sciences.

“His scholarship and leadership in the development of ASHA’s evidence-based practice framework and the development of the World Health Organization’s (WHO) International Classification of Functioning Disability and Health (ICF) system to include speech, language, swallowing, and hearing have altered the course of the professions of speech, language and hearing sciences,” Rousseau said.

Threats, professor and chair in SLU's Department of Speech, Language and Hearing Sciences, has served as ASHA’s representative liaison to WHO since 1999 and as a leader of the international field trials for communication disorders. Rousseau says Threats’ research and scholarship in these areas have been extensively referenced and have informed the ICF.

Threats, an ASHA Fellow, was also recognized for his publications and presentations. He was the primary contributor concerning communication disorders for the 2011 WHO's publication World Report on Disability.

Threats was an invited keynote speaker in the following countries: Portugal, Philippines, Slovenia, Hong Kong, Chile, Canada, Australia, New Zealand, and Greece. He was also an invited reviewer by the government of United Arab Emirates to evaluate the first speech-language pathology program developed in that country.

“I first started attending ASHA conventions when I was a doctoral candidate,” Threats said, reflecting on his career. “At the time, I did not think that I would ever be one of the people being honored.”

“When I looked at a list of past awardees, I realized that they were the authors of many of my textbooks, had held ASHA office, and had titles of dean or chair,” Threats said. “Not only did I not think I would be in their company one day, but I doubted I would have any of those accomplishments.”

Threats said having the opportunity to work with and learn from many great collaborators helped him get to where he is now.

“Early in my career, I was fortunate to have past awardees as mentors or collaborators. At that point, I was honored to have those people willing to work with me,” Threats said. “When they started quoting my work in their presentations, I was ecstatic! However, I did not think I would be 'one of them someday.' To sum up how I feel: I feel blessed.”

Other notable awards for Threats include ASHA’s Certificate of Recognition for Outstanding Contribution in International Achievement in 2012. Then, it was only the second award bestowed by ASHA and the first given to an African American speech-language pathologist.

Threats also received the St. Louis American Foundation’s Excellence in Health Care award in 2010. At the time, he told the newspaper that he dedicated his awards to his brother Kenny who has autism.

To be considered for the ASHA Honors of Association, a nominee must have a sponsor and at least two co-sponsors who submit letters supporting the nominee’s distinguished contributions.

“He has significantly altered the course of our profession through his 30-plus years of insightful and rigorous research and distinguished scholarship, administrative service, and outstanding teaching and mentoring of future speech-language pathologists.”

Threats will be formally recognized at an awards ceremony on Friday, Nov. 18, at the ASHA Convention in New Orleans.

Corey Mauer, marketing coordinator in the Doisy College of Health Sciences, and Bridjes O’Neil, communications specialist in the Division of Marketing and Communications, contributed to this story.

About Doisy College of Health Sciences