He was born Feb. 22, 1932, in Dorchester, Massachusetts and entered the New England Province of the Society of Jesus at Shadowbrook in Lenox, Massachusetts on July 30, 1949. He pronounced first vows there on July 31, 1951. 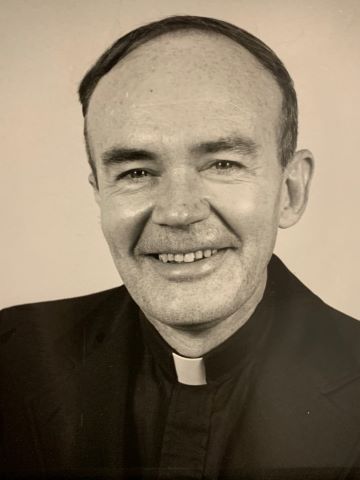 McLeod earned bachelor’s and master’s degrees in philosophy and classics from Boston College. He received his Ph.D. in theology from the Pontifical Oriental Institute in Rome in 1973.

From 1956-59, Fr. McLeod taught English, geometry and religion at Baghdad College in Iraq. After working on his doctorate from 1964-68 at the Pontifical Oriental Institute, he returned to Baghdad in September of 1968 to teach Arabic studies at Al Hikma University. He and other foreign-born Jesuits were forced out of the country in November of that year.

Fr. McLeod served as the rector of the Jesuit Collegian Community in Boston from 1969-73. He came to Saint Louis University in 1973 and taught theology until his retirement in 2006. After retiring from SLU, he wrote about theology.

Fr. McLeod was preceded in death by his parents and his five siblings, William, Robert and Richard McLeod, Marjorie Costello and Carol Stanley. He is survived by sisters-in-law Kathie McLeod and Jane McLeod, and 13 nieces and nephews.

A funeral Mass is scheduled for 4:30 p.m. Tuesday, March 15, in the Loyola Room of Jesuit Hall, with visitation from 4-4:30 p.m. A livestream of the funeral Mass will be available on YouTube by searching “Fr. Fred McLeod Funeral Mass.”

Memorial gifts may be made to the USA Central and Southern Province of the Society of Jesus at 4511 West Pine Blvd., St. Louis, Mo., 63108, or through the Province website.