ST. LOUIS – Human traffickers regularly post photographs of their victims posed in hotel rooms for online ads. As COVID-19 restrictions and quarantines continue to lift around the world, one Saint Louis University researcher reminds travelers that by simply downloading an app, they could play a role in saving lives.

TraffickCam is a free mobile app that empowers travelers to anonymously photograph hotel rooms. Uploaded data is available to child sexual abuse and human trafficking analysts at the National Center for Missing and Exploited Children. Analysts who access the portal can upload and compare their photos against images in the database. They use the photos to find victims and as evidence to prosecute perpetrators.

Stylianou said her efforts on a cold case served as the app’s launching pad. 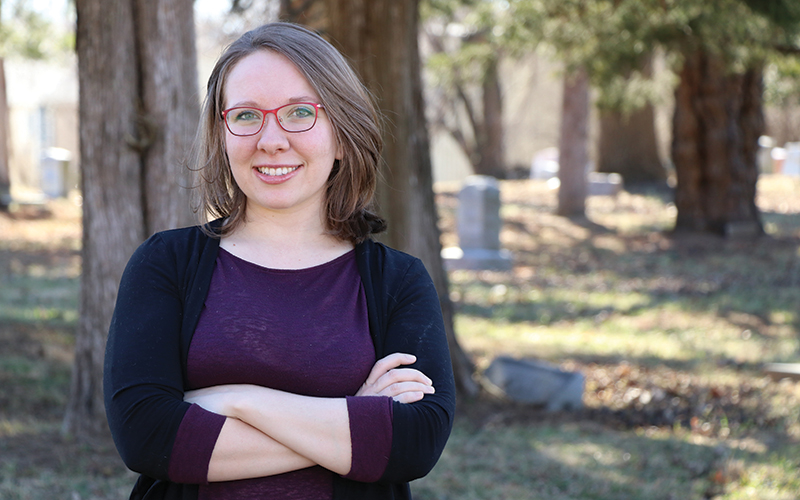 Stylianou’s research focuses on computer vision and machine learning algorithms. In 2013, Stylianou was a research associate at her alma mater Washington University in St. Louis. For modern forensic analysis, she and fellow researchers worked with the St. Louis Metropolitan Police Department to locate and exhume a young Jane Doe’s grave at Washington Park Cemetery in Berkeley, Missouri.

"The young crime victim was decapitated. Investigators could not identify her and buried her in the cemetery across from the airport," Stylianou said. "They wanted to figure out who she was and where she came from, but they couldn't find her grave."

Using historic photographs and images from the U.S. Geological Survey, Stylianou applied her camera calibration and geospatial expertise in outdoor imagery to pinpoint the grave. They predicted it was just to the left of a full-grown tree that wasn’t there 30 years before.

Her prediction proved accurate, and investigators located the burial plot. Researcher's tested the child’s remains for DNA and minerals. Mineral tests revealed the child probably spent most of her life in one of 10 southeastern states: Florida, Georgia, Alabama, Mississippi, Louisiana, Arkansas, Texas, Tennessee, and the Carolinas. The detective said the researchers’ findings gave him a direction to focus his investigation.

“That was a turning point for me in my career. I knew then that I wanted to find a way to do good in the world using these computer vision algorithms.”

Because of that work, Stylianou won a seat in a local FBI Citizens Academy in 2014. One of the classes dealt with human trafficking and efforts to utilize cell phone photos of hotel rooms to combat the problem.

In the fall of 2019, Stylianou began her career at SLU as a Research Institute Fellow to continue her work. Stylianou said one priority has been to increase community engagement. She and her collaborators published “Hotels-50K: A Global Hotel Recognition Dataset” at the 2019 Association for the Advancement of Artificial Intelligence (AI) Conference, a premier conference on AI.

Additionally, for the last two years, Stylianou has run competitions on Kaggle, an online community of data scientists and machine learning practitioners. Researchers can submit their own machine learning models to gauge the best approaches for recognizing hotels using the datasets assembled by Stylianou and her collaborators. She hopes that this will lead to improved approaches researchers can integrate into the TraffickCam system to produce better results for investigators.

Since its launch in 2015, more than 250,000 hotels and 290,000 images have been added to the TraffickCam database. Researchers have shared the app with the National Center for Missing and Exploited Children. Stylianou says the app has successfully aided in the rescue of victims, and efforts to expand partnerships are underway in the U.K. and Canada.

“This is an issue that people care about but feel helpless,” Stylianou said. “It's been nice to provide this sense of empowerment, both for everyday people taking pictures when they travel and for myself in providing the tools and data for investigators.”

Exchange Initiative provides resources, information and networking solutions to combat sex trafficking in the U.S. Download the TraffickCam app on the App Store (iOS) and Google Play (Android) or use the desktop app at www.TraffickCam.com.

Nix Conference & Meeting Management, based in St. Louis, manages meetings, conferences and trade shows for associations, religious organizations, businesses and nonprofits. Nix has managed events on four continents and in 17 countries since 1985. Nix leads the charge among meeting planners to end sex trafficking in hotels and founded Exchange Initiative, the developer of the TraffickCam app. For more information, call (314) 645-1455 or visit www.nixassoc.com.