Like all other birds of prey, Astrid swallows her smaller meals whole — fur and all. She regularly regurgitates the remnants of her meals: a pellet made up of indigestible bones, fur, and scales. Researchers will later collect and dissect the pellets to study her diet, finding evidence that she has gobbled up mice, shrews, squirrels, and even other birds. 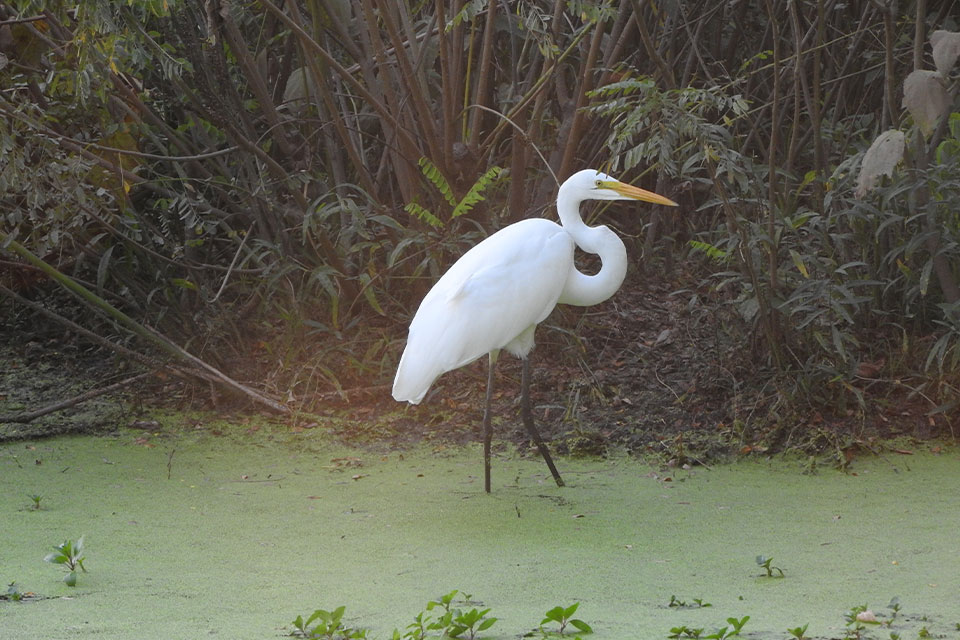 Combining experts in wildlife ecology, animal movement, and veterinary medicine, the project is comprehensively examining wildlife health, behavior and interactions in the mosaic of ecosystems in Forest Park.

“In today’s increasingly urbanized world, city parks are recognized as important areas for wildlife species to survive and to hopefully thrive, as well as much needed green spaces for humans to enjoy,” said Sharon Deem, DVM, Ph.D., Director, Saint Louis Zoo Institute for Conservation Medicine. “Our work within the Forest Park Living Lab is to better understand the habitat needs of wildlife—through their movements—in one of the greatest urban parks in America, while also understanding how the health of these amazing animal species may be linked to human well-being.”

In October 2021, animal experts from the World Bird Sanctuary, Saint Louis University and the Saint Louis Zoo fitted Astrid, a great horned owl (Bubo virginianus) native to Forest Park, with a small GPS tracking device. The tracker is designed to rest comfortably on her back like a little “backpack” between her wings. She is the first bird of prey to be studied in this way by the Forest Park Living Lab. 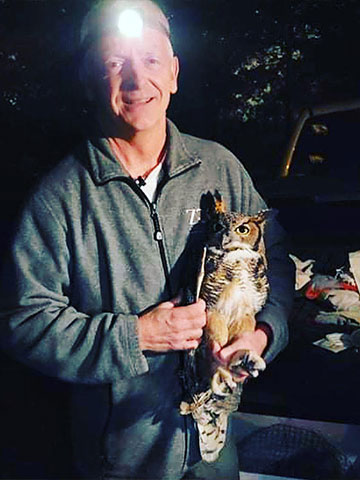 By wearing the device, Astrid is helping researchers collect data on urban owl movement and behavior, revealing which parts of the park she relies on for food, shelter, safety and to raise chicks. Through studying behavior and diet of apex, or top, predators like owls, researchers can understand more about the health of the ecosystem within Forest Park.

Over the last year, scientists have mapped Astrid’s movements. The data show that she spends her days roosting in trees near the prairie boardwalk by Steinberg Skating Rink. At night she hunts in the trees just west of the boardwalk and around Jefferson Lake. Astrid also visits the sporting areas in the southeast corner of the park, resting on flag sticks in the Highlands Golf Course and on fences and light posts near the Boeing Aviation Fields. Though Forest Park is her home base, she sometimes ventures into the city, flying around the hospitals east of the park and occasionally stopping by Saint Louis Community College.

“Even for just a few minutes, it was incredible to have this impressive bird literally in our arms,” said Jeffrey Meshach, Deputy Director, World Bird Sanctuary. “Upon her safe capture, we went right to work with the Zoo veterinary team acquiring small samples of blood and saliva to determine if she was healthy in all aspects. We also fitted her with a transmitter that has given us astounding looks at her nightly movements. She moves around so much we gave her the nickname 'Action Astrid.'”

Astrid’s mate is Edward, an adult male great horned owl. The pair can sometimes be seen by guests visiting Forest Park. In addition to GPS tracking, researchers collect regurgitated owl pellets found under trees where Astrid and Edward are known to roost. The pellets are carefully dissected in a lab to study how the owls’ diets vary throughout the course of the four seasons.

“Humans are increasingly starved of nature, including positive experiences with wildlife,” said Stephen Blake, Ph.D., professor of biology at Saint Louis University. “The benefits of exposure to nature are well known, and the loss of connection to nature may be connected to behavioral problems, depression, and other negative consequences among humans. Our vision is to make nature available and accessible to city dwellers and to inspire wonder in the natural world for the benefit of both people and wildlife.”

In addition to the owl, researchers are actively tracking raccoons, box turtles and snapping turtles. The project will eventually grow to track many more species ranging from coyotes to mallard ducks to fish. 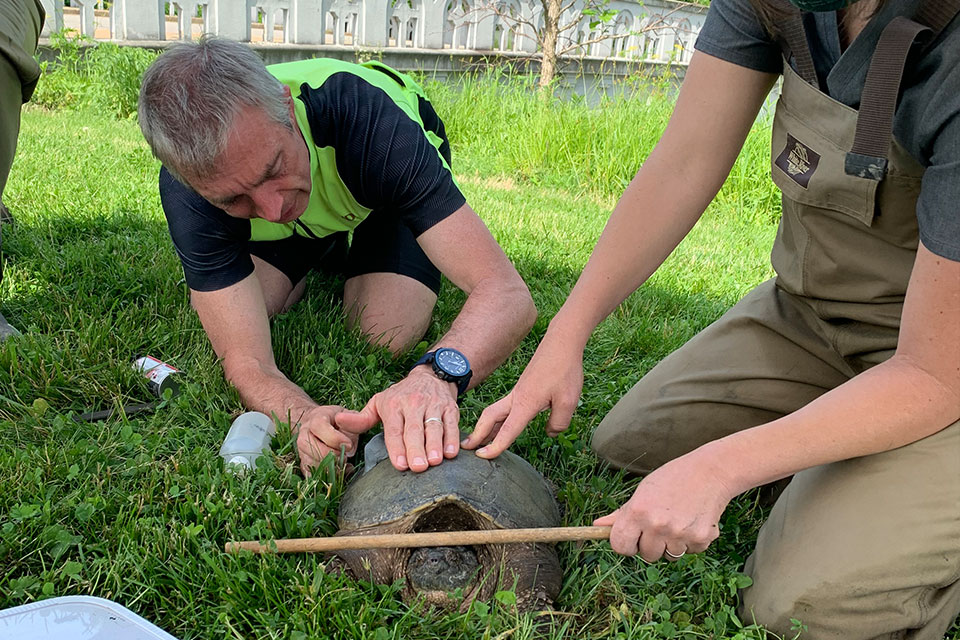 “I don’t think Forest Park is necessarily unique; what I find amazing about the park is the proximity to wildlife that is hiding in plain sight,” said Blake. “People pay thousands of dollars to go to the Serengeti to see an apex predator; however, there are avian, terrestrial and aquatic apex predators right here in Forest Park, playing the same ecological roles as lions do on the Serengeti. One does not have to go to Galápagos to see ancient tortoises — some of the box turtles in Kennedy Forest may have been alive during the World’s Fair. The hummingbirds one sees near the Boathouse may have flown from Central America. It is all so astonishing, and its right here.”

By building a movement dataset of individuals from a variety of species using all the habitats of the park, the project is providing a completely unique map of biodiversity health and movement that can guide conservation steps and give researchers an indication of Forest Park’s environmental health.

“Forest Park provides recreation facilities and world class institutions for human use while serving as a hotspot for urban wildlife,” said Stella Uiterwaal, Ph.D., a postdoctoral fellow with the Living Earth Collaborative. “Studying wildlife here – and in other urban greenspaces – is critical to conserving wildlife and gives us important insights into species interactions, ecological communities, and biodiversity in our changing world.”

“Every species on Earth lives embedded in an ecological community,” said Anthony Dell, Ph.D., a movement ecologist with the National Great Rivers Research and Education Center. “The ways that species interact with each other and with the physical environment ultimately determine who will persist in the community and who won’t. In this study, we are taking a system-wide approach that requires understanding the relationships between species in Forest Park, such as between predator and prey, or between two species that compete for the same food or shelter.”

A key goal of the project is to better understand how the biodiversity of urban parks differs from locations more remote from human activities. “We’re discovering how species ranging from herbivores to top predators undergo their daily lives in Forest Park and, importantly, how are they affected by human activities,” said Dell. Better understanding the biodiversity of urban parks should help managers, such as Forest Park Forever, to balance the needs of animals and human visitors to the park.