It has been three years since Saint Louis University’s Thomas Finan, Ph.D., chair and associate professor in history, excavated in Ireland. In 2019, Finan led a team that discovered extensive remains of medieval settlement on Castle Island, the castle of the MacDermot kings of Ireland. 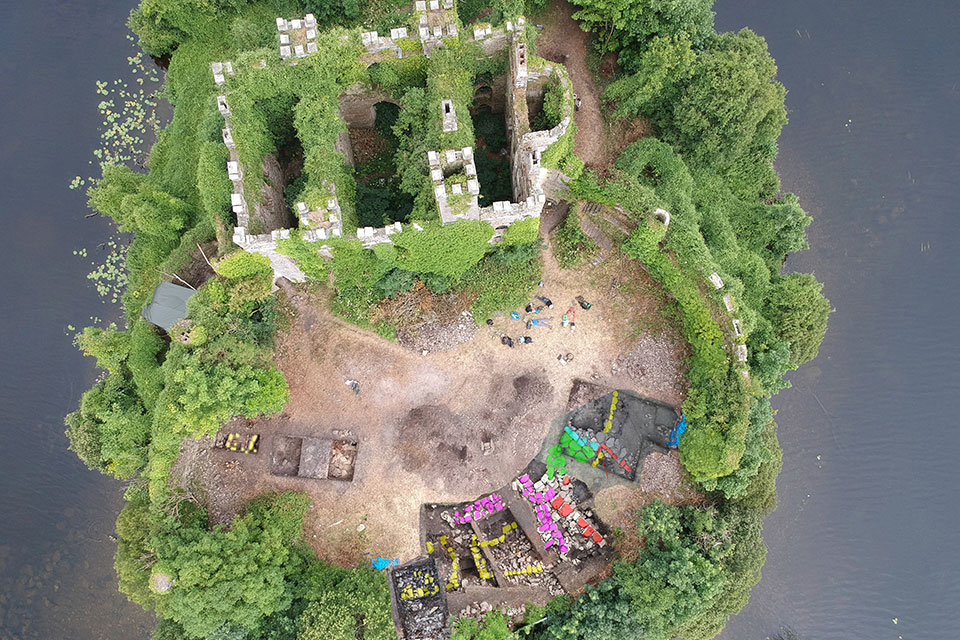 An overhead look at the excavations at the Rock of Lough Key. Photo by Thomas Finan, Ph.D.

“We had a great season in 2019, with some fantastic finds which ended up on the cover of Archaeology magazine,” Finan said. “We intended to return in 2020 to continue the project, but it turned into a three-year hiatus.”

That three-year wait was worth it, as this year, Finan, with colleagues Jimmy Schryver from the University of Minnesota Morris and John Soderberg from Denison University, managed an excavation on the same island that yielded astounding results.

When beginning his excavations, Finan usually takes preliminary geophysical surveying to get a glimpse of what is under the surface and takes daily UAV photographs for excavation cuttings. Finan also engages in aerial photography, survey, and remote sensing to get the best possible lay of the land.

Finan’s gut was telling him to not only take aerial photos of the ground, but also of the surrounding water. It was there he made his surprising discovery.

“I studied the sun’s angle at various times of the day and figured the best lighting was at 11:30 a.m. for seeing sub-surface features,” Finan said. “On a clear day with calm wind, we were stunned to find an underwater causeway leading to the island from the mainland nearly 300 yards away.”

The causeway is about a meter under water, and Finan suggests the medieval lake’s level was probably much lower than it is today.

“This is huge. It explains how people likely moved large stone to the island and likely reveals the approach the English took to attack the island in the siege of 1235,” Finan said. “The narrative of that siege has often been confusing because the English siege engines would not have had the range from the mainland. I now believe that their approach was across the causeway.” 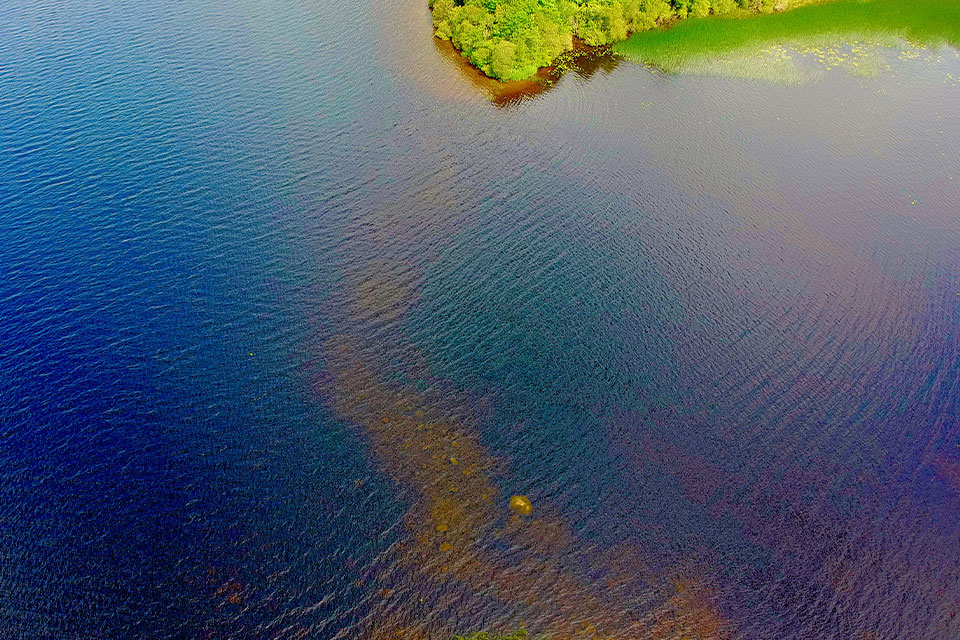 Making a discovery that could change the view of history already made it a successful dig. But throughout the four-week excavation, the group continued to pull up exciting artifacts from the dirt.

“We had a good idea where the main features were, so the decision of where to dig was easy,” Finan said. “But I also decided to expand the size of the three trenches to the maximum possible, and as a result, we hit more features, including extensive evidence of bronze working and what appear to be lime kilns.”

“This island never fails to surprise us,” Schryver added. “It holds so many secrets and it does not let those secrets go very easily. But every season, with a hard four weeks, we answer more and more questions.”

The excavations collected well more than 25,000 individual pieces of butchered animal bone, among other items as well. The significance of the animal bone is that under analysis, the team can build a picture of diet, agricultural process, climate and economy over time.

“In just two seasons of excavation, MacDermot's Rock has yielded unprecedented results,” Soderberg said. “The size and quality of preservation is unsurpassed by any other published assemblage from Gaelic areas, creating the first opportunity to get robust zooarchaeological insights about Gaelic lordships and how they compare with those from areas under more direct Anglo-Norman influence. With additional excavation seasons, MacDermot’s Rock has the potential to revolutionize understanding of social dynamics of medieval Ireland.”

MacDermot’s castle, with historical references from as early as the 12th century, has long been assumed to be primarily a 19th-century folly, or “fake” castle; built on the island with the medieval remains removed. But through more than 15 years of digs, Finan and his colleagues have proven without a doubt the 19th century remains merely hide the extensive medieval remains.

Finan says the artistic finds from this excavation, such as dress pins, harp tuning pins, gaming pieces, dice, and decorated bone, are direct connections to the medieval past.

In addition to the SLU and Dennison teams, the project also welcomed a crew of students from Saint Louis University High School.

“I’ve worked with Tim O’Neil on several projects in the past, and when I mentioned the Rock, he immediately put a plan together,” Finan said. “The five students from SLUH proved to be incredible assets to the team and provided a needed boost when we hit the heavy deposits of animal bones. The guys faced the challenges of working on an international research project with ease.”

Sam Moore, lecturer in pre-historic archaeology at Atlantic University of Ireland in Sligo, worked with the team for several days. At the conclusion of the final day of excavations, he remarked, “that, gentlemen, was a mighty campaign.”