'Farm to Fork' Dinner Spotlights Pollinators' Place on the Plate

Saint Louis University students met unlikely members of DineSLU’s culinary team during the Oct. 19 “Farm to Fork” dinner hosted in Grand Hall’s dining room – the over 4,000 species of bees native to North America that are integral to producing many of the foods students eat daily. 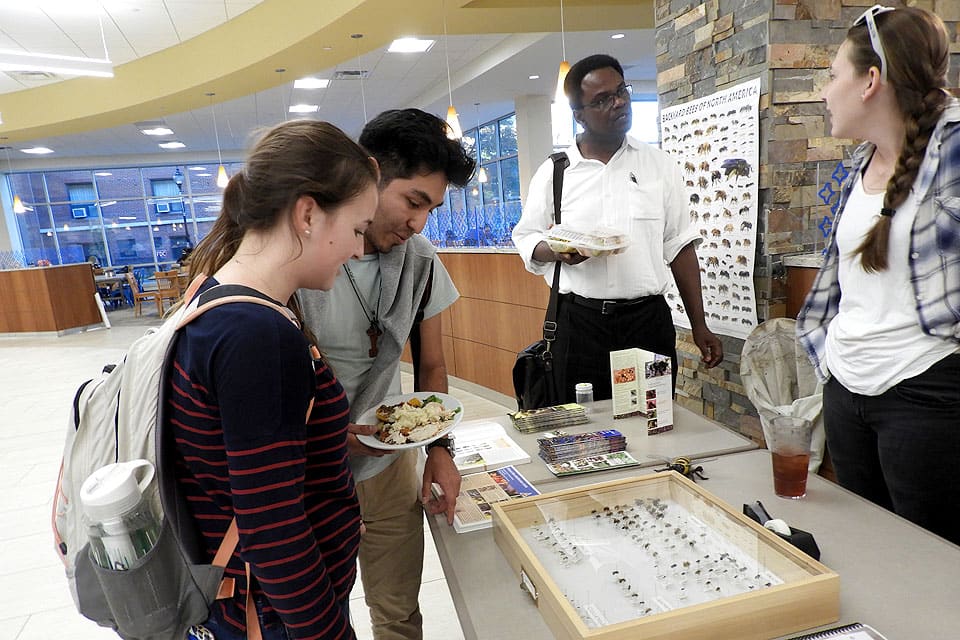 Sophomores Claire Landewee (left) and Xorge Hernandez learn about the role bees played in producing their dinner as part of DineSLU's "Farm to Fork Dinner" on Thursday, Oct. 19. Photo by Amelia Flood

The pollinator-themed dinner was a joint effort for DineSLU and University researchers Gerardo Camilo, Ph.D., Damon Hall, Ph.D., and their students. Camilo, Hall and graduate and undergraduate students in their labs manned an information table in the dining hall while special labels informed hungry students about the impact bees had on their potato and leek soup and ratatouille.

“This was a unique partnership opportunity to raise awareness about native bees, their role in the food supply, and how SLU is helping the bees,” Amye O’Neal, DTR, DineSLU nutrition coordinator, said. DineSLU staff approached the Center for Sustainability’s researchers after being inspired by a similar pollinator dinner hosted by the St. Louis Zoo and through DineSLU’s work with the University’s Green Billiken initiative. After O’Neal spoke with faculty and graduate students interested in pollinator researcher, DineSLU set about creating the night’s menu.

“The St. Louis Zoo Pollinator’s Dinner, while impressive, was intimidating to replicate,” O’Neal recalled. “So, instead, we created a menu that took advantage of available local products, highlighted how specific native bee species pollinate those products and could still feed approximately 1,200 customers. Our primary focus was making as many pollinator tie-ins as possible; the easiest tie-ins were produce.”

For Camilo, the event offered another way to integrate the research that he, Hall and their students have undertaken on pollinators like bees and the crisis of colony collapse and other issues that impact the insects including pesticide use.

“Many people are aware of the pollinator crisis, and may have a rudimentary idea of the overall impact, but recent research has shown that most people can't identify most bees, or how this crisis affects them personally,” Camilo explained. “Effective policy changes come about as a consequence of that knowledge and understanding.” Camilo’s lab hosts “bee parties” for students and has also worked on outreach activities across the City of St. Louis.

Camilo joined his students in talking with other SLU diners who stopped by to examine a case of bee specimens, literature from local bee groups and organic farming and gardening groups, and Green Billiken resources.

“This was extremely easy given that all our students enjoy talking about bees and pollination,” Camilo said. “Once the students gain the knowledge and experience they become highly motivated to share what they have learned.”

DineSLU holds “Farm to Fork” events once per semester and seeks to partner with the SLU community, O’Neal said, and discussions are underway about a future pollinator dinner, potentially in the spring semester.

“Thanks largely in part to the organic and local farming movement, we’re seeing a progressive reconnection between ourselves and the food we consume,” O’Neal said. “Many people are interested in ‘where’ the food is coming from or ‘what’ is in the food. But how many also stop to consider ‘how’ those plants and products are created? Since we already work with Green Billiken and SLU Sustainability on a number of other dynamics of sustainability, native bees proved to be a fun but low awareness topic. I certainly learned a ton about the native bees!”