Saint Louis University President Fred P. Pestello, Ph.D., announced the launch of the Taylor Geospatial Institute on Thursday morning during an event in the Interdisciplinary Science and Engineering (ISE) Building.

Led by Saint Louis University, the Taylor Geospatial Institute is a first-of-its-kind institution that brings together eight leading research institutions to collaborate on research into geospatial technology. 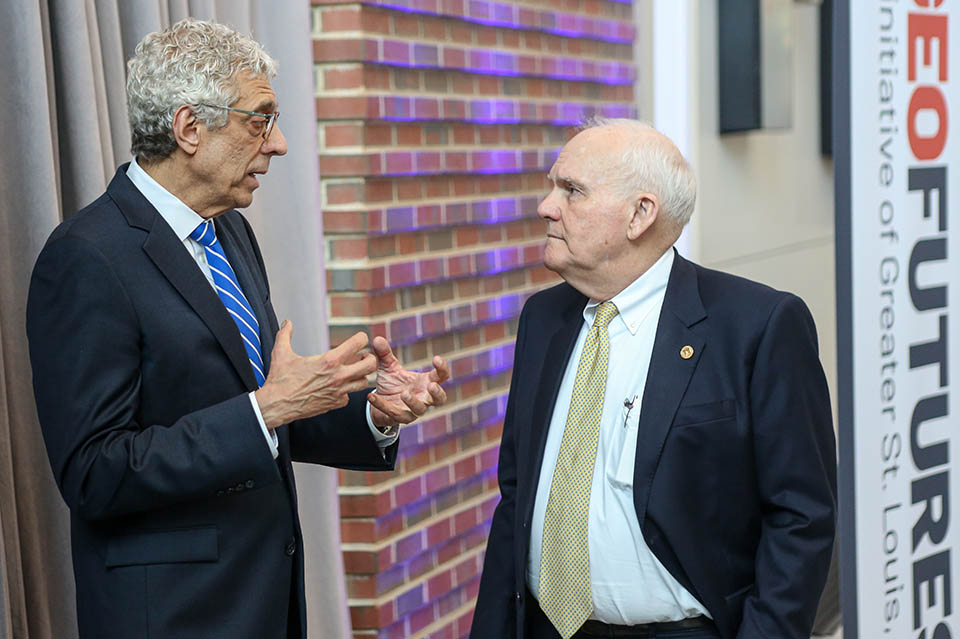 “This is the moment we are marking the start of something great,” Pestello said.

The Taylor Geospatial Institute is funded by a legacy investment by Andrew C. Taylor, Executive Chairman of Enterprise Holdings, Inc. and Founding Chair of Greater St. Louis, Inc. with supporting investments from each of the eight member institutions. It builds on St. Louis’ significant geospatial assets and accelerates the region’s position as the global center of geospatial innovation, impact, and excellence.

Taylor said the National Geospatial-Intelligence Agency’s construction of a new campus in North St. Louis combined with a visit to their current St. Louis office led him to believe geospatial would play a big role in the city going forward. He wanted to get involved and knew a regional collaboration made the most sense.

“I don’t think you can get anything done of significance alone,” Taylor said.

The Taylor Geospatial Institute will act as a regional hub for access to and development of technology powered by big data analytics and computing resources to support a collaborative research and training environment with a focus on:

Multiple speakers at Thursday’s event staked their claim to St. Louis being the heart of geospatial’s future. Donivan James, a SLU student, pointed out that geospatial is already a large part of the city’s presence.

James spoke about his undergraduate experience at the University of Missouri-Kansas City in his hometown. He said while there, he developed a passion for geospatial work, but couldn’t find a job. The jobs, he said, were in St. Louis.

James moved to the city and began taking classes at SLU. He said the new Taylor Geospatial Institute and the collaboration between the partners will only enhance his experience at SLU and benefit him, and others, in the future.

Thursday’s announcement came in front of a packed crowd in the ISE building.  Leaders from St. Louis’ business, civic, academic, and governmental communities came together to celebrate the new institute.