In 2021, Saint Louis University  announced that Juneteenth, which falls on June 19 each year, would become an official University holiday.

Juneteenth commemorates the end of slavery in the United States. Origins of the holiday date back to June 19, 1865, when more than a quarter-million enslaved people living in Texas learned from arriving Union troops that they were free by presidential decree — more than two years after the Emancipation Proclamation went into effect.

The University will close on Monday, June 20, in observance of the holiday. Flags commemorating Juneteenth will fly over the University’s St. Louis campuses from Friday, June 17 to Tuesday, June 21.

However, Juneteenth is “more than a day off,” said Dr. Richard Marks, assistant vice president of Diversity and Innovative Community Engagement (DICE) and director of the Cross Cultural Center for Global Citizenship. “It’s a reminder of our country's historical past, present reality, and hope and promise for the future.” 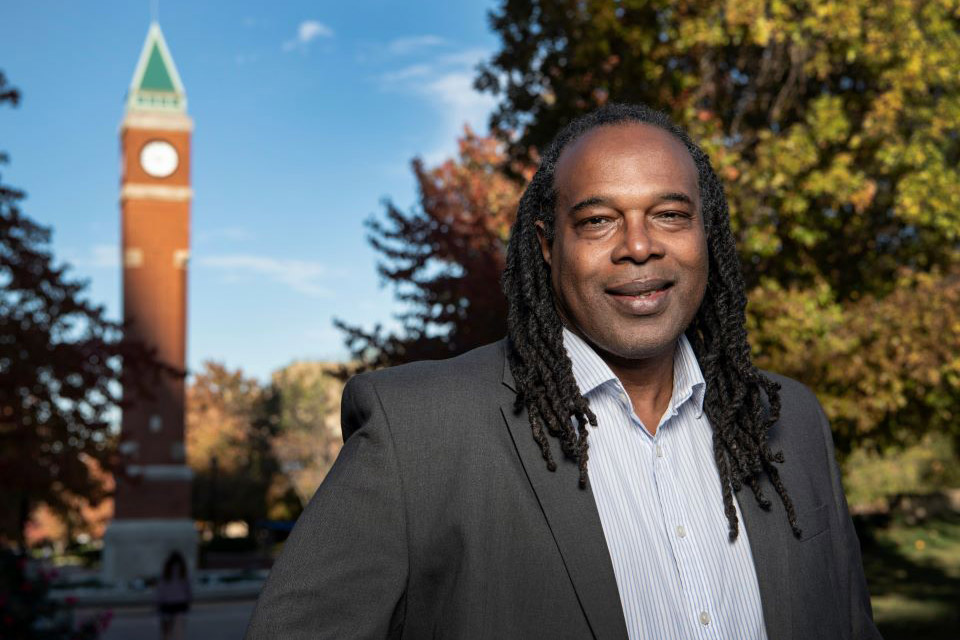 For the Saint Louis University community, Juneteenth is also a day to remember and to carry forward the legacy of Dr. Jonathan C. Smith.

At the time of his passing, Smith also co-directed the Slavery, History, Memory and Reconciliation (SHMR) Project — a work of the Jesuit Conference of Canada and the United States in partnership with Saint Louis University. Smith was one of the project’s founders.

“This Juneteenth, we honor the memory of our dear friend and colleague, Dr. Jonathan Smith, who led the University’s efforts to reckon with our history of enslavement,” said SLU President Fred P. Pestello, Ph.D. “Jonathan showed us how to strengthen our resolve and find joy in creating together a path toward greater equity and inclusion. On Juneteenth, we remember and celebrate him, and we renew our commitment to the work he began.”

Continuing on the Path

Smith’s influence can be felt by colleagues and students across the University, as well as the broader community.

Among other initiatives that built on Smith’s legacy, the DICE team was expanded under the leadership of interim vice president, Dr. Amber Johnson. The division led the University in commemorating the eight-year anniversary of OccupySLU and advanced work that began with the Clock Tower Accords.

This spring’s Atlas Week programming included a discussion about slavery and SLU's own history of owning enslaved people led by Robin Proudie, founder of the Descendants of the Saint Louis University Enslaved (DSLUE).

The Audre Lorde Scholars program launched with its inaugural symposium, “Who Said It Was Simple? Navigating the World as Women of Color in the 21st Century,” held this May.

Planning is in the works for the inaugural Dr. Jonathan C. Smith Black Alumni Conference.

Smith is remembered for his ability to make every person feel that they belong — and to help each person see that they have a role to play in fostering belonging and equity for others.

“Dr. Smith has impacted my life in so many ways — professionally, spiritually, and personally,” said Regina Walton, executive assistant in DICE.

“The University's acknowledgment of Juneteenth, one of Dr. Smith’s priorities, calls us to remember and dedicate ourselves to equity and racial justice,” Marks added. “We do the work, and we are the work.”

SLUCare clinics will be open on Monday, June 20. Staff scheduled to work that day can bank the holiday hours for later use. SSM Health is honoring up to eight hours of banked holiday time for staff who cannot use the hours before their employment transition on July 1.

SLU community members are encouraged to attend local events that celebrate Juneteenth, including:

A Walk for Democracy and Justice