Garanzini helped celebrate the new University Core curriculum with a keynote address Thursday afternoon in the Center for Global Citizenship. The address, “What Makes a Jesuit Core Jesuit,” was the inaugural event in a planned year-long event series focused on highlighting and exploring the University Core's first student learning outcomes. 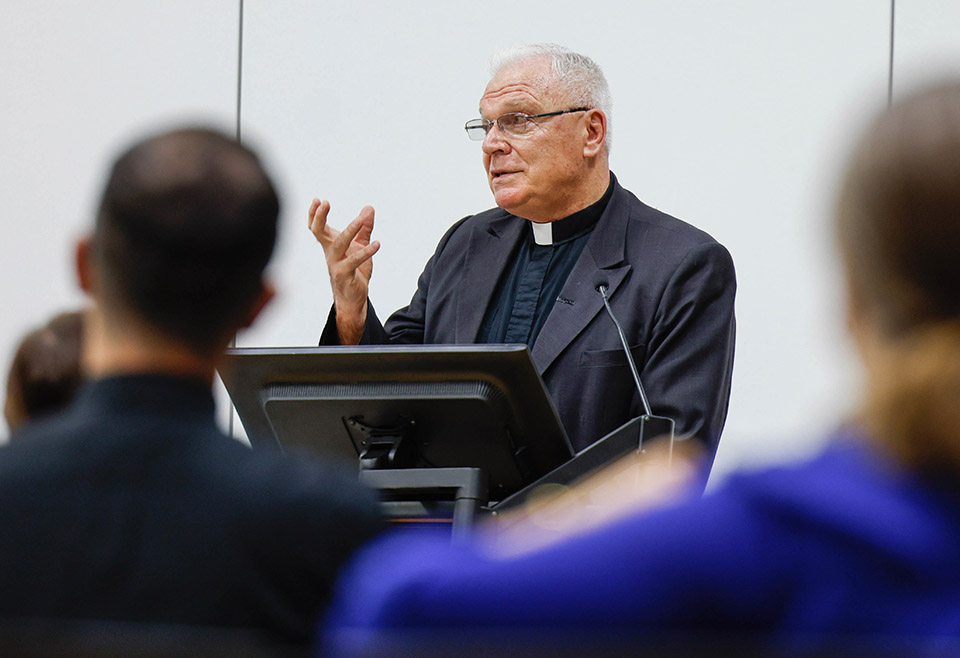 Fr. Michael Garanzini, S.J., President of the Association of Jesuit Colleges and Universities, gives an address on “What Makes a Jesuit Core Jesuit” at the Center for Global Citizenship on Sept. 22, 2022. Photo by Sarah Conroy.

The Saint Louis University Core is an integrated intellectual experience completed by all baccalaureate students, regardless of major, program, college, school or campus. The University Core aims to prepare all SLU students to be intellectually flexible, creative and reflective critical thinkers in the spirit of the Catholic, Jesuit tradition. The goal of the Core is to nourish students’ minds, hearts, souls and well-being, and guide them in discerning how to use their talents for the good of others and to find God in all things.

Garanzini, a SLU alum and current member of the University’s board of trustees, said that in all his years in academia, he hasn’t seen anything quite like the new core. He said he thinks the Core has a lot of potential.

“What I read, what I see, I really like,” he said. “I think it has the makings of what could be a very exciting project.”

The Core was implemented for the Fall 2022 semester. Garanzini praised the fact that the program is set up so it can be reviewed and evolved over time.

“We think of core curriculum as the solid bedrock of an institution,” he said. “We think of them as unchangeable and, in fact, we don’t change them very often — maybe once every 25 years. What we have with this core, is the outline of a program that continues to evolve. We should never think of it as static, or as stiff because times are changing.”

Garanzini brought up the COVID-19 pandemic as one example of how things are changing. He also noted that the world is changing in other ways, too, with ongoing problems like economic injustice, threats to the environment and the “post-truth” nature of the world. He said it’s up to universities to train the leaders of tomorrow to be prepared for a world that is constantly changing.

“The world that this student body is going out into doesn’t need simply local leaders,” he said. “It needs leaders with a large capacity for a grand vision because if we’re going to deal with the problems of populism, post-truth, polarization, we have to be the kind of person who can manage those things in herself or himself. We’re going to have to be the kind of people who think about finding a way forward in what is a murky future.”

Training leaders in a changing world was how Jesuit education started, Garanzini said. The Jesuits were early teachers because they were educated and were encouraged to start their own schools. Jesuits thought the schools were a good idea because they knew what an impact education would have in training the future leaders of the community, he said.

“The most important thing they could do is make sure there was a certain kind of leader for these towns,” Garanzini said. “Offering an education they couldn’t get anywhere else, … this was going to be a school with a curriculum. What kind of programs they should learn first, what they should learn next — it very much invented what kind of programs we have in place today.”

“If you’re going to train leaders, No. 1, they have to know themselves,” Garanzini said. “They have to know who they are inside. You have to instill in them a sense of discovery that points not only to themselves or the world but to society in general and also to God.”

Garanzini said it was important that the schools work to create better people with a strong moral compass. He said the early Jesuits educators encouraged diverse identities in the schools by inviting Lutherans and Huguenots to study alongside them in order to make students comfortable with differing views. The Jesuits wanted the future leaders to be comfortable in uncomfortable settings.

Garanzini said the schools were a success.

“The formula works,” he said. “So why do I think your core is a Jesuit core? With themes like discovery, integrity, courage, and connection — those have been the themes that have guided Jesuit education. It’s a Jesuit core because it understands that these are the things that guide your selection of course material. … If you’re going to train elite people, people who can lead, they’re going to have to have these qualities,” he said.