Alum Lives Childhood Dream by Flying with the Blue Angels

It’s a not-so-guarded secret that a lot of effort goes into making the Blue Angels’ performances look easy. So it should come as no surprise that 2005 Saint Louis University Parks College alum, Matt Suyderhoud put a lot of effort into becoming a member of the elite flying team, as well. 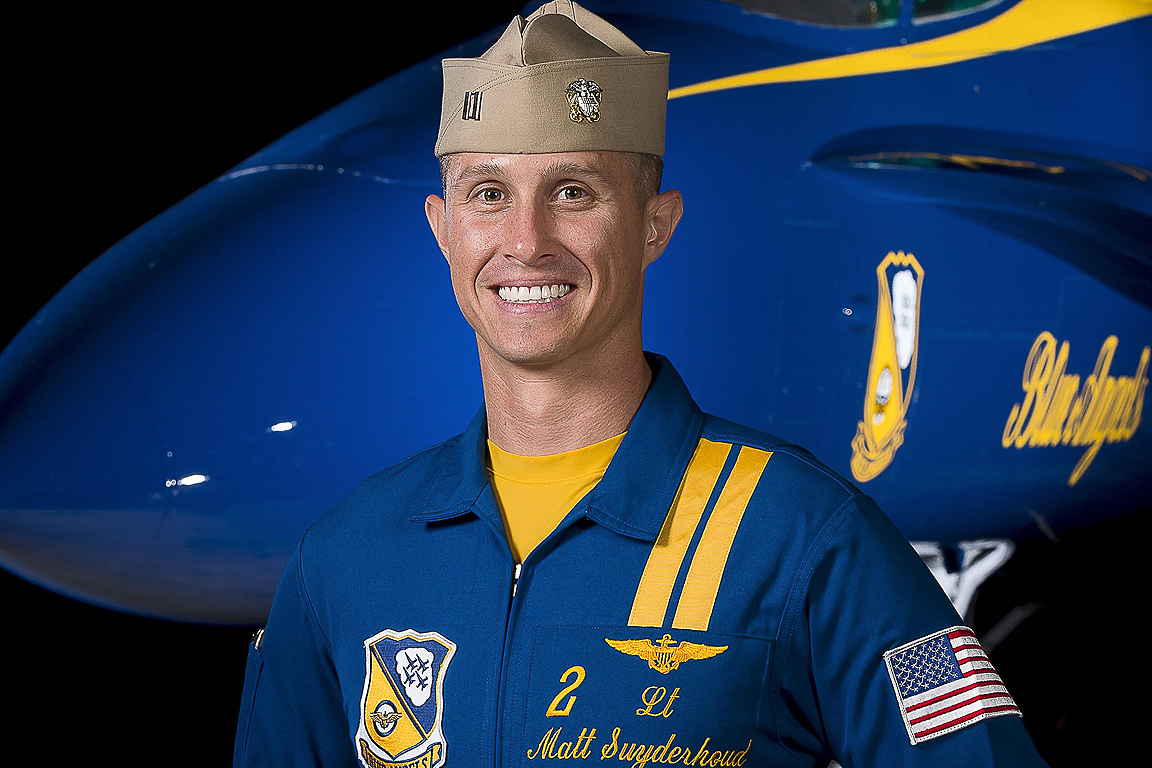 Saint Louis University alum Matt Suyderhoud has been flying with the Blue Angels since 2014.

Suyderhoud and the rest of the Blue Angels recently performed at the Spirit of St. Louis Airport in Chesterfield and visited SLU for presentation in Tegeler Hall’s Carlo Auditorium.

"I’m very excited to be coming back to St. Louis. It is very much a homecoming for me because I consider St. Louis a second home,” Suyderhoud said before the visit. “It is extra special for me because I get the opportunity to come back to Parks College at SLU  to speak to students about my experiences with the team and in the military in general. While my aviation career started in Hawaii, it really took shape in St. Louis at Parks.”

Suyderhoud wanted to be a pilot long before he enrolled at Parks. His family photo album has a picture of Matt and his twin brother Johan (also a SLU Parks alum and fellow F/A-18 Navy pilot) at just three years old attending their first air show. They are holding toy Blue Angel planes and posing with a Blue Angels pilot decked out in the iconic blue flight suit.

I saw my first Blue Angels show when I was three years old...It inspired me from then on and now I get to return the favor.

The path from SLU Blue to the Blue Angels was not effortless or easy. Both Matt and Johan tried out for the flight demonstration squadron in 2012 but were not selected. After being called to join SEAL Team One as a Joint Terminal Air Controller, Johan decided not to tryout again in 2014, but Matt gave it another shot and this time made the cut. His journey from SLU to the Blue Angels came full circle with his recent visit.

“Being a Blue Angel is so special. We go from town to town, city to city, all across this great nation and demonstrate the pride and professionalism of the US Navy and Marine Corps,” Matt said. “Being able to represent the men and women of our fighting forces is a true honor. I am looking forward to representing them, and St. Louis, proudly—and loudly.”

Matt says the Diamond 360 maneuver is favorite part of the show, but all the skills of the precision flying team will be on display at the air show this weekend. And perhaps a young fan in attendance will catch the bug and think “hey, I’d like to do that someday,” like Matt did all those years ago.

“I saw my first Blue Angels show when I was three years old and that got me into aviation—the same with my brother,” Matt said. “It inspired me from then on and now I get to return the favor. It’s an incredible opportunity.”