From an Undergraduate Research Lab to NASA

Saint Louis University student Lindsey Jasper can pinpoint the exact moment she became fascinated by space. She was in elementary school when her dad took her to see an IMAX show about NASA and the space program. 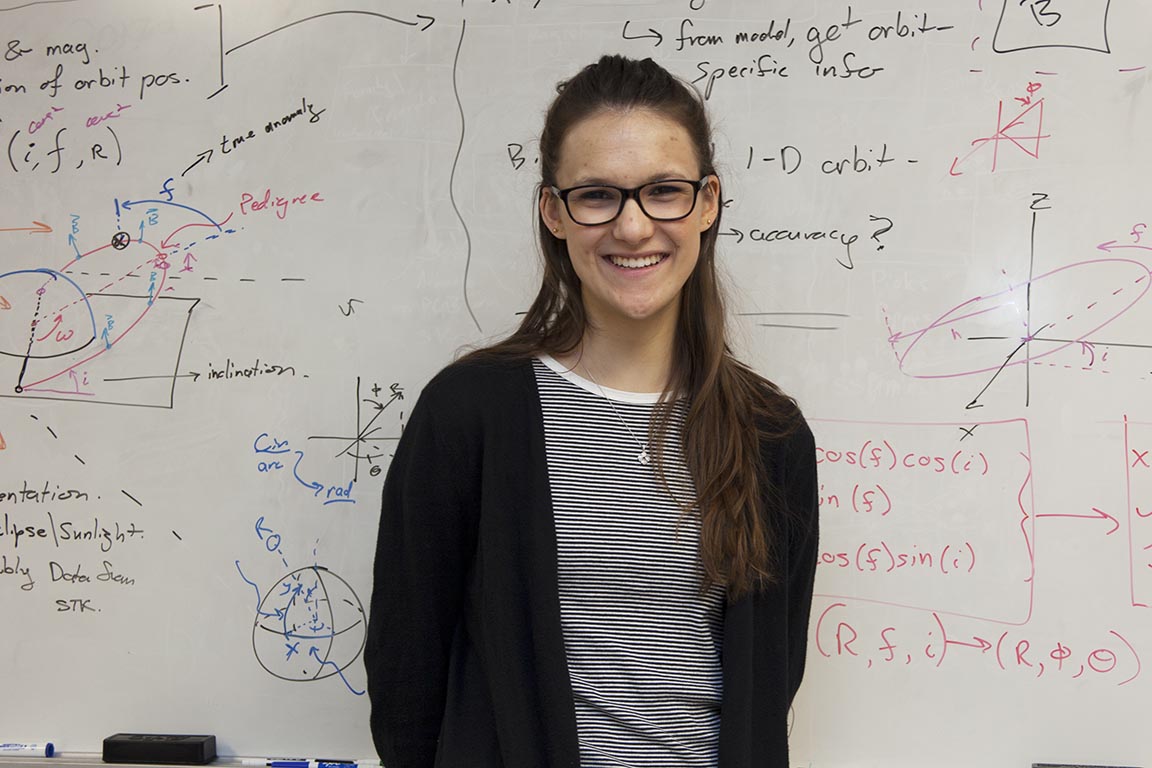 “They cut to the international space station, and the astronauts are eating M&M’s, swimming in the gravity-less environment,” she said. “I thought, ‘That is so cool; that is exactly what I want to do with my life.’”

A decade later, Jasper has made significant strides toward achieving that goal. Currently a sophomore aerospace engineering student at SLU’s Parks College of Engineering, Aviation and Technology, the Boston native is the communications team lead in the Space Systems Research Lab. There, she is helping design an unmanned autonomous satellite — called Copper-2 — that is headed to space later this year.

In addition to her work in the lab, Jasper assists Michael Swartwout, Ph.D., director of the Space Systems lab and chair of SLU’s mechanical and aerospace program, with research into long-term propulsion systems and orbital mechanics for future near-earth prospecting satellites.

Those opportunities, along with an internship at St. Louis-area industrial automation firm Neff Power, have helped the 19-year-old land a job she couldn’t be more excited about: For the next two summers, she’ll work at NASA in Ohio as a systems engineer in its ground-based systems and aeronautics division.

After only three semesters at SLU, Jasper is already blown away by the research opportunities available to her as an undergraduate student. She recalled an eye-opening moment when a Google search related to the subject of her research efforts turned up virtually empty.

“I realized at that moment that I was doing real research. No one else has done this before,” she said.

Whether or not her current research leads to any scientific breakthroughs, Jasper is thrilled to be part of the process. “Being able to say that I was a part of something that furthered science as a whole is so cool,” she said. “And being able to do that so young is not only what’s great about SLU, but what’s great about aerospace engineering.”

Jasper also has been able to make valuable contributions in the Space Systems lab. Earlier this year, a problem with Copper-2’s battery system threatened to ground the entire mission, and she played an instrumental role in getting the project back on track.

“As a freshman — and one of only two workers in the lab over the summer — Lindsey would stay late and run tests, analyze data and help diagnose the problem,” said Nicholas Mercadante, senior aerospace student and student program manager of the Space Systems lab.

That type of practical, hands-on learning is an important aspect of SLU’s undergraduate engineering programs. According to Swartwout, first- and second-year students find themselves in key leadership positions, rather than holding a clipboard while seniors run the tests and do the design work.

Women Widen the Path for Girls in Science

While aerospace engineering has traditionally been a male-dominated profession, Jasper is optimistic about growing numbers of girls and women being attracted to the field.

“The more women role models that exist in engineering, the more girls who will be attracted to it. Because when you see yourself in someone with a job that excites you

— and who’s been successful — it’s much easier to make the jump to ‘Oh, I could do that; I would like a career like that.’”

Asked if she’s excited about the potential of being that role model for the next generation of girls, Jasper recalled being invited to speak to a group of middle school students about the path that led her to aerospace engineering and the work she’s doing today.

“It was the first time I realized: Wow, people actually look at me and see someone they want to be like,” she said. “And for me, that’s a huge honor, a huge privilege.”

Like Jasper, Swartwout is hopeful that girls will be encouraged as they look to engineering careers, and especially to SLU.

“One of the things that makes me proud of our students and this lab,” Swartwout said, “is that having women in positions of management authority and technical decision-making is normal. There is nothing unusual, within this lab, in having a woman run a team, or even the entire program.”

Jasper’s position as Space Systems Research Lab communications team lead and the systems engineer role she’ll play at NASA both position her as liaison between groups of engineers — mechanical, computer, aerospace — who, at times, don’t speak the same language.

Systems engineers, Jasper said, facilitate communication between a project’s various teams, keeping everyone on the same page, so they can operate as a cohesive unit.

Jasper’s natural tendency to look at the big picture is one of the reasons she values SLU’s holistic approach to aerospace engineering education, where theory, math and real-world experience are used in concert with one another.

“So much of engineering education is looking at ideal situations — like physics problems that have no friction,” she said. “That doesn’t happen in the real world. Things don’t work like they do in perfect textbook environments. So by having all this hands-on experience, you end up being someone who can look at a real-world problem and effectively solve it by using the theory you know from the classroom and real-life practice.”

Jasper said she couldn’t be happier with her decision to come to SLU.

“The experience and opportunities at the University have been great,” she said. “I would not be where I am today without SLU.”