You're in Luck: The History of SLU's Billiken Statue

If you’ve ever been to Saint Louis University’s campus, odds are that you’ve left with a little more luck than you had when you arrived. 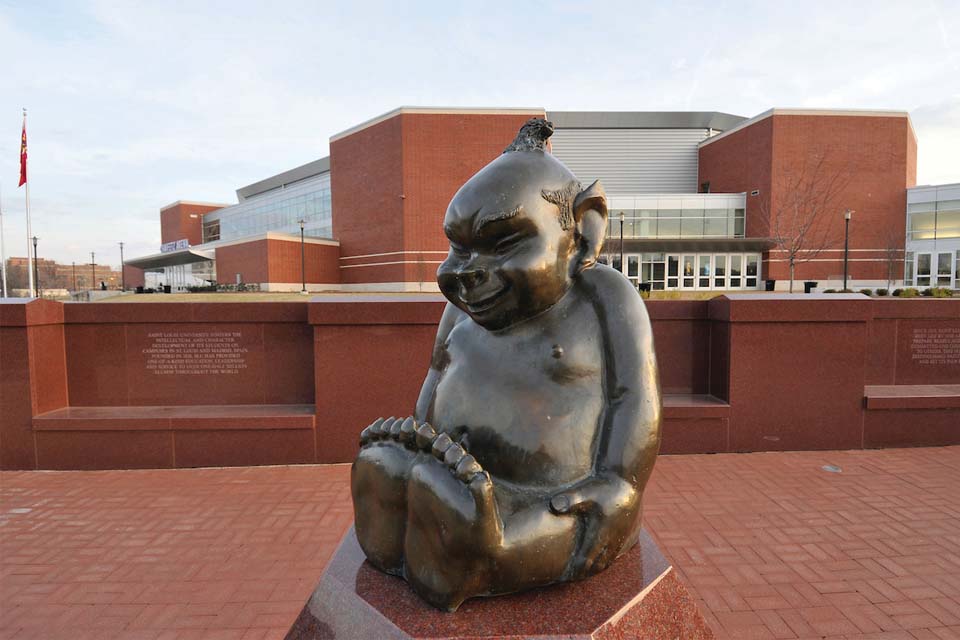 Billiken statue outside of Chaifetz Arena.

Signs of the Billiken, SLU’s unique mascot and a symbol of good fortune, can be spotted throughout campus, but the most recognizable representation is likely a statue located outside of Chaifetz Arena. Legend has it that if you rub its belly, it will bring you luck and its stomach, worn shiny by the hands of thousands of Billikens, attests that many SLU students and sports fans are willing to give it a try.

The Origin of the Statue 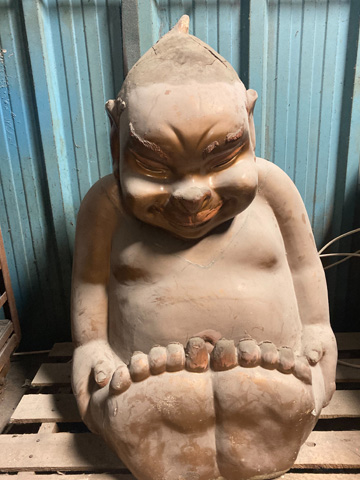 The original mold for the Billiken statue.

A Billiken, similar to the current statue, disappeared in the 1940s, resurfacing in the 1990s. The current version of the statue was made possible by what would become a multi-generational Billiken family. Mary Frances Skinner Reid (A&S '39) was the youngest of six children, four of whom would become SLU graduates. Reid remained involved with SLU after graduation, eventually joining the alumni board.

At an alumni event in the early 1990s, Reid spoke to then President Lawrence Biondi, S.J., mentioning that her husband, James Reid, had a stainless steel foundry in O’Fallon, Missouri. Father Biondi provided a fiberglass Billiken to James who used it to create the mold that would cast the Billiken seen on campus today.

But how did rubbing the Billiken’s stomach become a tradition? Joan Reid Milburn (A&S '78, Grad A&S '81), the daughter of James and Fran Reid, said when James was first given the mold, he noted the similarities between the Billiken and other statues that people rub for good luck, introducing the idea of rubbing the Billiken for luck. Since from its beginnings the Billiken always embodied good fortune, students and passersby quickly embraced the practice. Indeed, the plaque placed on the base of the Billiken statue reads, “According to legend, those who rub its belly will have good luck.”

The Billiken statue was presented to the University by the Reid family at a SLU basketball game in November 1995 and has called various spots around campus home over the last two decades. It currently sits in Drury Rally Plaza, situated outside of Chaifetz Arena, placing it in a prime location for Billiken fans, graduates and passersby to stop for a picture and a little luck. 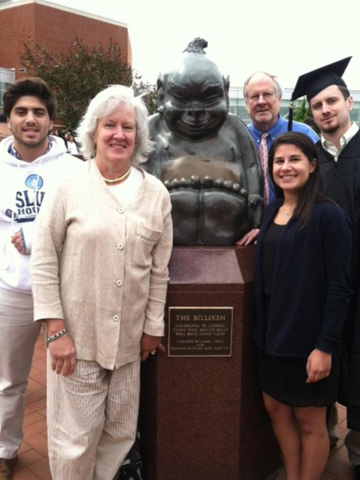 The Milburn family with the Billiken statue at Joe Milburn's graduation from SLU in 2016.

“Every time I see a graduate pose with the Billiken, I know my parents are sending a heavenly ‘Congratulations!’” said Joan Reid Milburn.

Joan and her husband, Mark Milburn (A&S '74), created another Billiken using the same mold years later. They donated that statue to St. Louis University High School in 2009 in memory of two SLUH students who had passed away that year.

“We donated that Billiken to remember all the students who were Billikens at heart but were not able to graduate from St. Louis University High School,” Joan Reid Milburn noted.

Paul Gillam (Class of 2023), has a long history with the Billiken as a graduate of St. Louis University High and now a student in the College of Arts and Sciences at Saint Louis University.

Gillam knew he had to continue that tradition during his college search.

"When I came to SLU for my campus tour and my parents and I walked past the Billiken statue by Chaifetz Arena, it only made sense for me to run up to it and rub its belly; I wished to make the right college decision and for a million dollars," he said. "Despite the fact that I’m not a millionaire, I think the better of my two wishes have, so far, come true."

For the Reid family, the tradition of being a Billiken has also continued to this day. James' and Fran’s daughter, Joan, received both bachelor’s and master’s degrees from SLU. Joan’s oldest son graduated from SLU in 2016, and her daughter will graduate in December of 2021.