Saint Louis University researchers are working across departments and around the world to create life-changing medications and biomedical devices.

Five of SLU’s researchers explain their work and the goals of SLU’s Institute for Drug and Biotherapeutic Innovation (SLU-IDBI).

Researchers at SLU are in the midst of planning the Institute of Drug and Biotherapeutic Innovation (SLU-IDBI) to bring together experts in drug development to share expertise, stimulate ideas, and foster collaboration. These researchers create potential medications and biomedical devices for diseases that are oftentimes under-researched.

David Griggs, Ph.D, associate professor of molecular microbiology and immunology, is an example of one such researcher. Griggs researches diarrheal diseases.

“[Diarrheal disease] kills between two and three million people per year,” said Griggs. “Over half of a million of those are children under the age of five.”

Griggs’ lab researches compounds that kill Cryptosporidium, a parasite that causes life-threatening diarrhea in infants. This impactful research garnered attention from the Bill and Melinda Gates Foundation and is now partially funded by the organization.

SLU-IDBI is both an interdisciplinary collaboration and a global one. It consists of around 70 faculty members, and includes researchers from various departments at SLU including: Biomedical Engineering, Chemistry, Molecular Microbiology, and Pediatrics. Many of these faculty members have experience in the pharmaceutical industry, which brings a wealth of industry knowledge to the group. The researchers at SLU-IDBI also collaborate with researchers around the world to create transformative medications and devices.

A Focus on the Forgotten

“We came in here with the idea to really focus on what the big pharmaceutical companies were not: rare diseases [and] neglected diseases which tend to afflict mostly people in poor countries, and I think that fits very well with the mission of Saint Louis University,” said Griggs.

Diseases that mainly affect poorer countries, such as diarrheal diseases, are often less researched despite the fact that they are often more deadly. SLU-IDBI strives to address this disparity.

“Not so many people work on [orphan] diseases... we can make big changes,” said Montaño.

Sverdrup began his research into FSHD shortly after he came to SLU, when his daughter was diagnosed with the disease.

“That it’s a personal issue is tough. You have to find a pace that you can maintain, but every night I go home and I see my daughter and … that’s all it takes,” said Sverdrup.

Though there are currently no treatments available for FSHD, Sverdrup’s lab has established a collaboration with a pharmaceutical partner and hopes to advance one of their treatments into human clinical trials soon.

SLU-IDBI is also on the forefront of an entirely new drug delivery system.

Silviya Zustiak, Ph.D, associate professor of biomedical engineering, studies hydrogels, one of the newest entries into the market of drug delivery devices, Hydrogels are polymers that form ideal mimics of any soft tissue in the body and can house critical biologics. Zustiak explains that what differentiates the hydrogels that are being developed at SLU is that they “can degrade in a desired amount of time.”

“[These hydrogels] can cure diseases which previously have been thought incurable,” said Zustiak.

Zustiak hopes that the innovative research happening at SLU will catalyze collaborations with companies who can then bring it to patients.

“The biotech scene in St. Louis is really attractive to our students and to our graduates,” said Zustiak. “We are creating a pipeline of problem solvers.”

St. Louis is rife with opportunity in this developing field, and with the Cortex Innovation Community just a few blocks away, SLU researchers are primed to make a big impact.

Founded in 2002 through a collaboration between SLU, Washington University in St. Louis, the University of Missouri - St. Louis, BJC Healthcare and the Missouri Botanical Garden, Cortex is the Midwest’s premier innovation hub for research, development, and commercialization in biosciences and technology. Because of Cortex, SLU-IDBI is able to connect and work with researchers both from the public sphere and from neighboring universities.

Learn more about the researchers featured in this video and article. 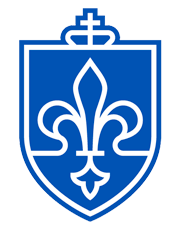 Associate Professor, Molecular Microbiology and Immunology
Griggs’ research is currently focused on two different topics: 1) cell proteins called integrins effect on scar formation and 2) cryptosporidiosis, an illness that often causes life-threatening diarrhea. He hopes that the many collaborations that his lab and SLU’s IDBI engages in will spur the production of life-saving medications for rare and neglected diseases.

Sverdrup’s lab is “focused on drug discovery in human genetic diseases as well as infectious diseases”. His current research emphasis is on facioscapulohumeral muscular dystrophy (FSHD), which is one of the most common types of muscular dystrophy for which there is still no treatment for. His approach is to “perform high throughput screening of chemical libraries to identify compounds intended to epigenetically suppress the DUX4 gene.”

Zustiak’s research interests are hydrogels and tissue engineering. Her lab focuses on developing biomaterials as cell scaffolds for drug delivery purposes. She emphasizes that “biomaterial-based models are crucial for bridging the gap between traditional tissue culture and animal models by providing a cell environment that closely mimics real tissue.”