In a conference room seven stories above the Gateway Arch, Eric Moraczewski (CSB ’04) paused mid-interview to watch several dozen visitors arrive at the base of the Arch.

In March and April, visits to the monument neared peak summer capacity. That’s remarkable not only because of St. Louis’ unseasonably cold spring — but also because it would be several months before renovations to the Gateway Arch museum would be complete, concluding a $380 million project to restore the Gateway Arch and reimagine the area from the Mississippi River to Kiener Plaza. 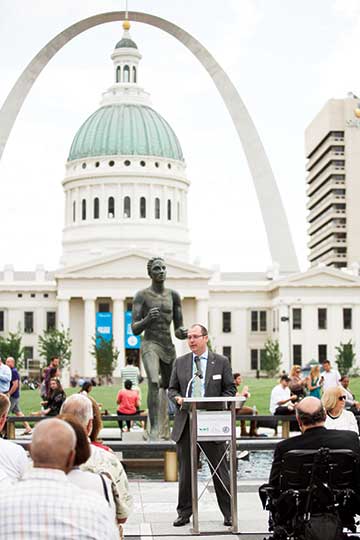 Moraczewski (at podium) at the grand opening ceremony of Kierner Plaza

Since 2016, Moraczewski has been executive director of the Gateway Arch Park Foundation, a nonprofit that supports the Arch and surrounding public spaces, and helps connect the community to the Arch and the city beyond.

Moraczewski grew up in Cleveland and attended a Jesuit high school before coming to Saint Louis University to study business administration and marketing. SLU is where he met his wife, Kathryn (Wohlschlaeger) Moraczewski (CSB ’04).

“One of the best things SLU had to offer me was the Jesuit model of being a man or woman for others,” he said. “It allows you to understand and appreciate why someone’s doing something a certain way, working with them as opposed to dictating.”

After graduation, that became a guiding principle of Moraczewski’s work. As chief financial officer of a Washington, D.C., museum design firm, he helped the company establish offices in San Francisco, Singapore and Shanghai. Today, the Jesuit philosophy is at the core of his role for the Gateway Arch Park Foundation.

“What’s made this project successful is working collaboratively with our partners and helping them to expand their own missions into the community,” he said.

Moraczewski approaches local businesses and philanthropists to raise the financial support to sustain Gateway Arch Park. He also works with the National Parks Service, Bi-State Development and Great Rivers Greenway to provide the 5.4 miles of renovated trails and 91 acres of park space surrounding the Arch.

The foundation also partners with community organizations to host a variety of free public events, such as a concert series with the National Blues Museum and events with St. Louis Public Library. SLU’s Bicentennial Mass and kickoff celebration was held at the Arch last September.

For Moraczewski, it’s all about providing opportunities to connect St. Louis-area residents and visitors to everything his adopted hometown has to offer.

“The Arch can be the catalyst that brings them in, then we can drive them out to experience all the other great things in the community,” he said. “People are going to discover there’s so much more than they realized, just like I did when I arrived at SLU in 2000.”