Belize 2020 Partnership Aims to Improve Lives by the Next Decade

Matt Ruhl, S.J., describes Belize as if it were paradise.

“On the Caribbean shores, on the Yucatan peninsula, lies a country so lovely that the locals refer to it as the Jewel,” he said. But he knows as well as any that not all of the facets of this jewel are beautiful. 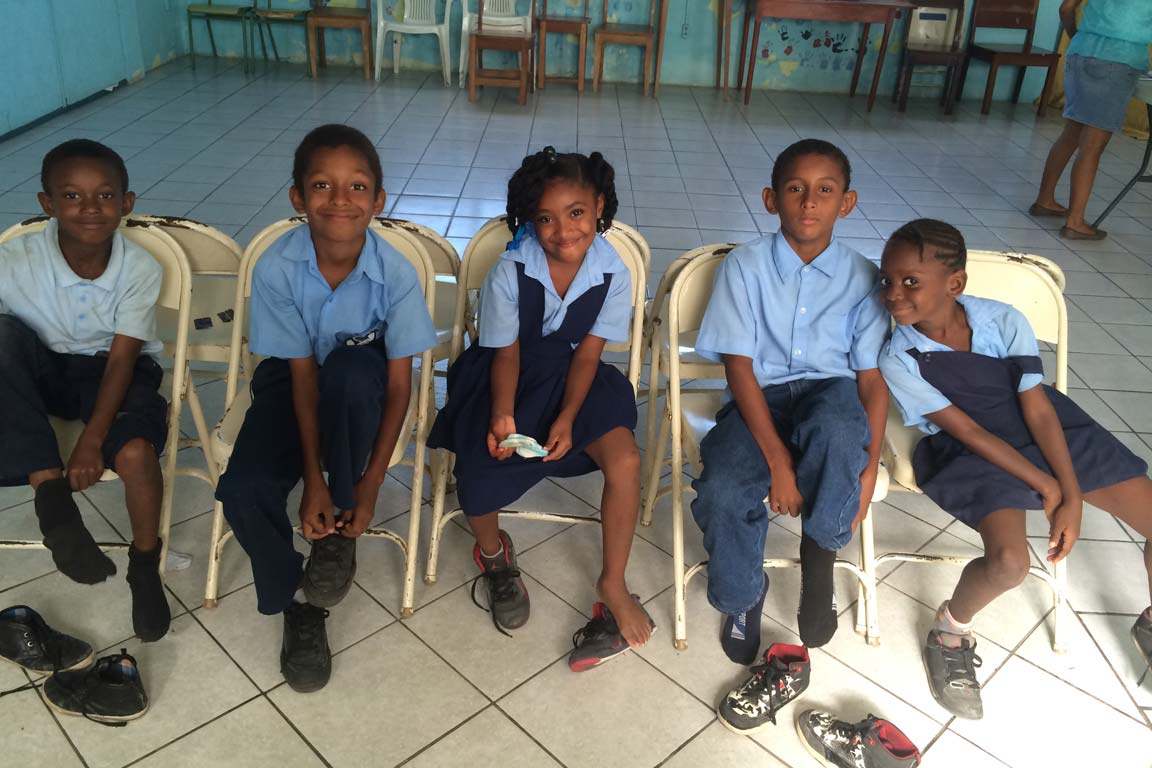 In the St. Martin de Porres parish center, children wait to have their height and weight taken for a nutritional assessment. Submitted photo

Since 2011, Ruhl (Grad A&S ’86) has been pastor of St. Martin de Porres Parish, a 50-year-old Jesuit apostolate in Belize City. He contends that the area suffers the same social problems any major city might face: unemployment, poverty and family instability, drugs and gang violence.

“I worked all over St. Louis, and I’ll tell you that Belize City is a mirror image, except it’s in Central America,” he said.

Surrounded by crime and overwhelming poverty, Ruhl eventually turned to the Saint Louis University community for help. He reached out to friends and colleagues, including philanthropist and education advocate Tom Nolan (A&S ’69, Grad ’70) and Chris Collins, S.J. (Grad A&S ’01), SLU’s assistant to the president for mission and identity.

Collins — recognizing that “there is some activity in Belize from almost every school or college we have at SLU” — brought together Saint Louis University, members of the business community and Belizeans for a symposium.

Out of the symposium came Belize 2020: An Ignatian Partnership, aimed at improving the lives of Belizean children and families by the year 2020. Together, the partners focus on health, continuing education and development in Belize.

Start at the Beginning: Project HEAL

To improve the lives of Belizeans for generations to come, Belize 2020 began by focusing on the city’s youngest residents.

Tina Cuellar-Augustus (A&S ’03), a Belizean native who finished her degree at SLU after attending St. John’s Jesuit Junior College in Belize City, witnessed firsthand the toll that gang violence, domestic abuse and poverty took on her students at St. Martin de Porres. The only counselor for a grade school of more than 700 students, Cuellar-Augustus knew these children needed help — but she also knew she couldn’t put a plan in motion without a full understanding of the situation.

Cuellar-Augustus met Beth Embry (Doisy ’09, Grad Cook ’13), a former public health administrator and researcher at SLU, through Belize 2020. Embry and her team provided nutritional and trauma assessments on nearly half of the grade school’s students. 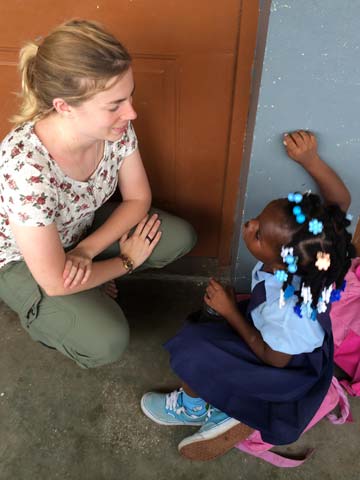 Embry, now pursuing her doctorate at the University of Colorado Boulder, considered herself a background worker of Belize 2020’s trauma initiative; she worked behind the scenes to equip Cuellar-Augustus with the best tools to help her students, their parents and teachers. Embry provided quantitative, research-based data and resources to back up what Cuellar-Augustus sees every day.

“Intuitively, Tina has always known how bad the situation is,” Embry said. “But to engage donors, engage the community and track progress, what she needed was the data to support what she was seeing.”

To get that data, Embry acquired the UCLA Post-Traumatic Stress Disorder instrument and modified it to be culturally and age appropriate for the students at St. Martin de Porres. Embry and two SLU graduate students, Jessica Buck (Grad PH ’16) and Monica Kavanaugh (PH ’15, Grad PH ’16), assessed more than 300 students.

The researchers expected strong results, but no one was prepared for the severity of the heartbreaking responses.

Seventy-eight percent of students experienced at least one traumatic event in their lives, and nearly half received at least a partial diagnosis of post-traumatic stress disorder. More than half of the children interviewed had witnessed gang violence firsthand, and 43 percent had lost a loved one in a violent manner. The researchers were disheartened by the responses.

“You look at this 7-year-old and think, you’re not supposed to have witnessed your uncle die in front of you from gang violence,” Embry said.

Kavanaugh felt the same way, recalling the experience of a young boy who told her that every time he hears gunshots, he runs outside to be sure his father hasn’t just been killed.

“This research really painted the picture of the person behind the problem,” Kavanaugh said. “I realized it wasn’t one faceless person — but very acute and individual needs.”

Those needs were addressed through a series of intensive, child-focused programs, under the umbrella of Project HEAL (Hope and Education Altering Lives). Spearheaded by Cuellar-Augustus, Project HEAL treats the “worst of the worst” cases of PTSD. Cuellar-Augustus and her team provide play-based cognitive behavioral therapy for students and teachers to help them cope and learn to process emotion. While in Belize, Embry trained teachers to implement a trauma-informed classroom, the first of its kind outside the United States; she gave them tools to de-escalate and identify trauma-influenced acting-out in children, rather than simply resorting to punishment. 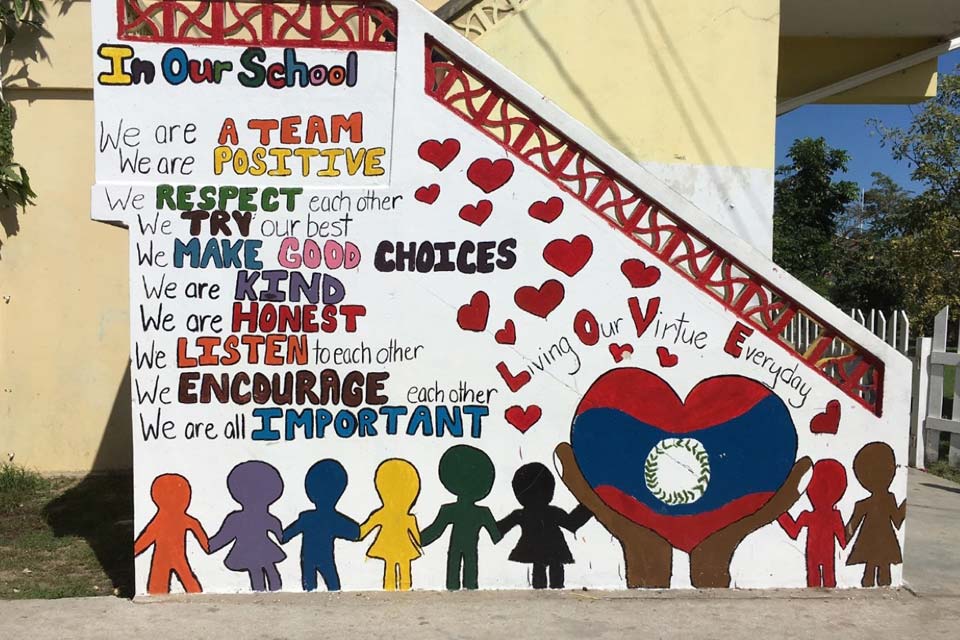 Other aspects of Project HEAL include HEAL Academy, a program that allows for longer school days and extended school years, giving students who have experienced trauma the extra attention and nutrition they need to thrive. A literacy coach helps students gain confidence and knowledge in reading. And a school greenhouse provides nutritious food for school lunches.

While Project HEAL has existed for only a few years, the students have already shown major improvements. The work has been far from easy, and progress is slow at best, but Embry and Cuellar-Augustus are proud of the progress they have made. Embry recalled a group of teachers who attended trauma management training in the middle of a country-wide strike. Cuellar-Augustus took pride in a young boy who just a few years ago was in the principal’s office for acting out nearly every week, but who this year only visited the principal three times. The women have stayed in touch with their first cohort of students, who are now in high school and are succeeding academically.

“A lot of these kids think they’ll be dead by the time they’re 30,” Michael said. “So a lot of our job is to give them hope — that your life has more meaning than you think it does right now.”

A Cycle of Growth: Educating the Educators

Hope permeates everything Belize 2020 does — and it has inspired a trajectory of education that goes from St. Martin de Porres to St. John’s College to Saint Louis University.

After St. John’s College, some students head to Saint Louis University to finish bachelor’s degrees and even pursue graduate work. Belize 2020 provides scholarships for education and social work students to continue their studies. Since the early 2000s, SLU’s School of Social Work has offered scholarships to a handful of Belizean students each year.

According to Dr. Sue Tebb, professor and former dean of SLU’s School of Social Work, many of those students ended up returning to Belize to give back to the community. One such student was Cuellar-Augustus, whose degree in psychology from SLU came thanks to Belizean scholarship funding.

When the Sisters of Mercy, who are heavily involved in Belize’s education system, approached Tebb about bringing SLU’s social work resources directly to Belize in 2006, she jumped at the opportunity.

“I’ve found if you go outside our borders, you realize what we have to offer,” Tebb said. “But we also learn so much from other countries.”

In Belize, that meant creating practicum positions for SLU social work students, as well as providing training for all of Belize’s social workers — essential for a country whose social workers do not tend to hold bachelor’s degrees.

Belize 2020 also works to foster excellence in teaching by offering scholarships for graduate work. In exchange, the recipient promises to return to Belize and serve its children for at least five years. The hope is that these educational endeavors will instill an attitude of paying it forward, propelling real and lasting change for generations to come.

This year, the first two recipients of the Saint Louis University-Belize 2020 School of Education scholarships received their post-graduate degrees. After their programs, Melissa Mendez Valladares (Grad Ed ’17) and Rosita Rose Mes (Grad Ed ’17) returned to Belize to make a difference.

At its roots, Belize 2020 is “a Jesuit enterprise,” Ruhl said. The Jesuits stand as connectors and mission bearers in Belize and in St. Louis — and they are often the reason St. Louisans find their way to Belize 2020.

That was the case for Nolan and his wife, Maureen, philanthropists who jumped in when approached by Collins. The couple became partners in Project HEAL and have dedicated themselves to the educational aspects of Belize 2020.

Mark LaBarge, an old friend of Ruhl’s and the president of SFP Landscaping Inc., brought his entrepreneurial skills and network to the project because of the Jesuit connection.

“If the Jesuits are there, there’s a reason,” LaBarge said. “More importantly, you know there’s hope.”

For others, the process begins with prayer. Community members and SLU alumni embark each year on a retreat to Belize City, where they live and pray with the people of St. Martin de Porres for three to four days. They visit the school and parish, see SLU’s work in the community and pray together at the vibrant Sunday evening Mass. LaBarge credits these retreats as the catalyst for donors to get involved and spread the word.

Collins sees the role of alumni and donors as providing support and capacity for Belize so it can begin to flourish — from continual education to on-the-ground infrastructural projects. Recently, St. Louis-based board members have focused on a capital campaign to build Swift Hall, a multipurpose recreational center for parish and community members. Named after Karl Swift, S.J., a Belizean brother who spent more than 15 years at St. Martin de Porres, the space was christened in September 2017 in celebration of St. Martin’s 51st anniversary. 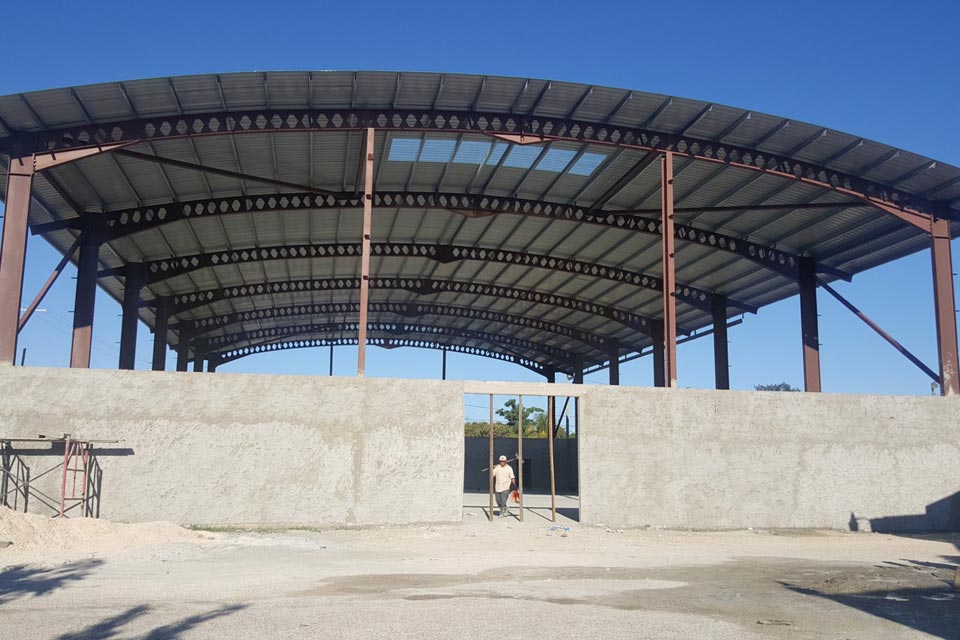 Swift Hall, a fully funded multipurpose center shown here under construction, was dedicated and opened to the public in fall 2017. Submitted photo

While specific campaigns will develop and change as the needs of Belize change, the mission of Belize 2020 will remain the same. Everything that the partnership does filters through its Ignatian roots.

Ruhl credits the 1973 speech by Jesuit Superior General Pedro Arrupe, S.J. — in which he called on Jesuit alumni to be men and women for others — for inspiring Belize 2020’s volunteers and a full generation of people to enter into a life of service, bringing hope and joy to others.

That hope and joy, at the end of the day, is what the Jesuits are trying to spread in Belize — and it’s how Ruhl measures success. He says that the smiles of the young children in Belize are what he cares most about.

“After a while, those smiles start to fade, and reality hits them hard,” he said. “Every time I see those kids smiling and enjoying the campus, that’s a victory. Our job is to keep those smiles on their faces.”