Dr. Frances Pestello describes herself as “a sociologist of law and deviance,” and she has the curriculum vitae to prove it. Her research has examined the effect of punishment on behavior, the impact of psychiatric medications on the sense of self, and the relationship between attitudes and behavior with her spouse, Fred. She’s taught abroad in Italy and England. She’s been a professor for more than three decades.

Her husband, University President Dr. Fred P. Pestello, has referred to her as “the original Dr. Pestello,” hinting affectionately at the fact that she earned an advanced degree before he did. He might also call her original for another reason, though: Fran is the very first first lady of Saint Louis University. 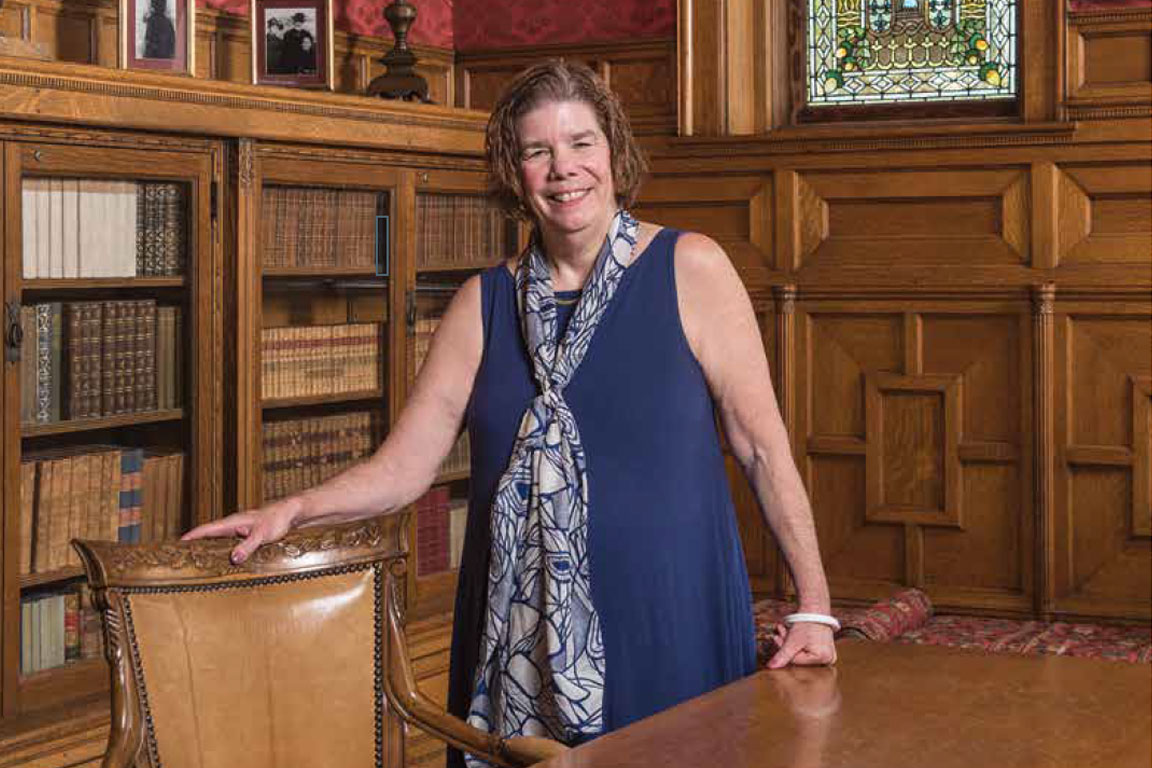 Dr. Frances Pestello stands in the library at Samuel Cupples House, one of her favorite places on campus. Photo by Steve Dolan

The Origins of a Life in Higher Ed

Fran grew up in suburban Philadelphia, in a town called Berwyn, “the next stop over from the very last stop on the Main Line,” she said.

One of six children in the Geyer family and the oldest daughter, Fran took care of her siblings. And although she always knew she wanted eventually to be a mother, she also knew she was destined to get a degree.

“My father had a Ph.D. in chemistry, and my mother entered Vassar College at 16 and got a bachelor’s degree in chemistry.

“They were huge advocates of education, particularly at small, liberal arts colleges,” she said. “All of my siblings ended up at similar kinds of schools, and all went on to get professional or advanced degrees.” 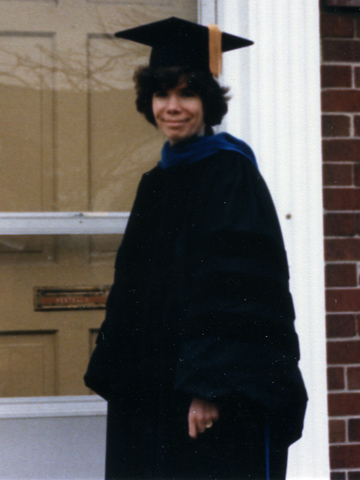 Fran in academic attire in 1985, ready to attend graduation at the University of Dayton, where she was on faculty. Submitted photo

Fran chose the College of Wooster in Ohio and fell in love with higher learning.

“I hadn’t been a great high school student, in part due to a spinal fusion for scoliosis at 16, which took me out of most of my junior year,” she said. “I got to college and thought, if this is what education can be, I love it. Everything I took my first year, I thought, I could major in this.”

She graduated in 1973 with a degree in sociology. But instead of continuing to graduate studies, she got a place in Kent, Ohio, with two college friends and spent a year working full time at a fast-food restaurant while figuring out her next step.

“It was a great sociological experiment,” she joked. “I quickly decided: This is not what I want to do with the rest of my life.”

A year later, while taking a graduate course about social stratification at the University of Akron, she met Fred Pestello, who was just beginning graduate school.

“He remembers being in the class together, but I don’t remember that detail,” she admitted. “I do remember being in the same graduate student cohort, and after a few years as friends we began dating.”

“Fred thought it wasn’t a good idea at that point because neither of us had a job, but we took a leap of faith,” she said. “Marriage is always a leap of faith, right? And you know what? It all worked out.”

It all worked out. If Fran Pestello has a mantra, that might be it. 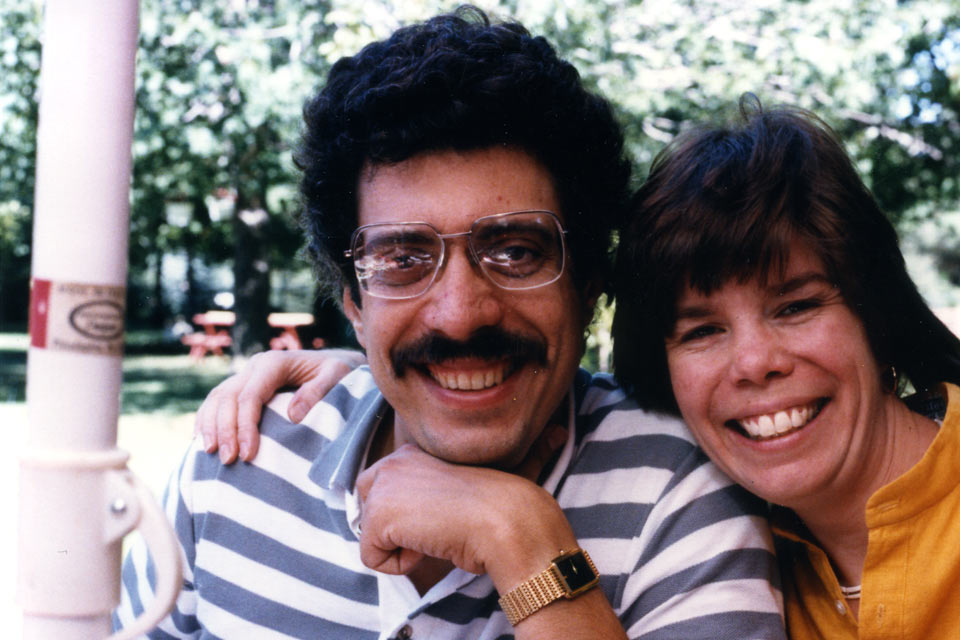 The Pestellos in Pella, Iowa, where Fran had her first teaching job in the 1980s. Submitted photo

The couple was about to embark on a series of leaps of faith, as they hopscotched around for academic positions.

In 1983, both Pestellos entered the job market. While he finished his graduate work, she interviewed at Central College in Pella, Iowa.

“I came back and said to him, ‘I think they liked me. I think they’re going to make me an offer. And I don’t think you’re going to like it there,’” she said with a smile.

“I was an East Coast girl, and Fred was a Cleveland boy. We were both out of our element in small-town Iowa,” she said. “Let’s put it this way: If you wanted Italian food, you had to go all the way to Des Moines.”

But the couple had made a deal that whoever got the first job offer would take it. Central College wanted her — and within weeks, the University of Dayton made him an offer. They made the difficult decision to start their careers apart.

“We thought it would be for one semester,” she said. “It ended up being a year and a half.”

“For many who work in the academy, working in the same city, let alone the same institution, is rare,” Fred said. “Fran and I worked in separate cities twice. It was tough. But during those times, we operated as a team — we always have.”

Eventually, Fran joined Fred at Dayton, which offered not just more opportunity but also a Catholic, Marianist affiliation in a bigger city — a place that suited both of them. Dayton created a shared position for them, the second one in the department.

“It was pretty innovative on Dayton’s part,” she said. “The deal was that we had half-time teaching, but we were not defined as part-time faculty; we were both treated as full-time faculty, each with one full vote on all matters.”

In due course, they earned their own faculty positions. He eventually took the administrative route, ultimately becoming Dayton’s provost and senior vice president for educational affairs. She ended up as the chair of the Department of Sociology, Anthropology and Social Work, a position Fred held a few years earlier. And in the meantime, they started their family, having a daughter, Vitina, and son, Freddie.

Eventually, Fred left Dayton to become president of Le Moyne College, a Jesuit institution in Syracuse, New York. This time, they lived separately for two years while he settled into his position and she finished up her term as department chair.

She arrived at Le Moyne as a full-time, tenured faculty member, but a third of her time was dedicated to the president’s office.

“It was a good transition,” she said. It seemed to lay the groundwork for the next role she’d take.

In March 2014, Fred Pestello was appointed the 33rd president of Saint Louis University. Fran found herself facing yet another decision about career and place.

“I did think about staying at Le Moyne briefly, because my department didn’t want to lose me and I liked my students and colleagues, but quickly I decided to go unscripted and jump all-in and see what presented itself in St. Louis,” she said. “And that’s worked out.”

What worked out this time is an arrangement that allows for all kinds of work she loves. She teaches part time in SLU’s Department of Sociology and Anthropology. She’s on the board of the Library Associates of Saint Louis University and of her neighborhood association in the nearby Central West End. She recently joined the board of the International Institute, another venerable institution in St. Louis. And of course, she supports the president’s office.

“I’m happy to extend Fred’s reach, while adding my own touch and perspective,” she said. “I think the most value I can add is being at things he can’t be at, on the academic side especially. I’ve been an academic and a faculty member since 1983. I know the academic world.”

And what does the husband of “the original Dr. Pestello” think?

“I learned a long time ago that little of significance is accomplished alone,” he said. “My time at Saint Louis University has absolutely been made possible by Fran’s support, guidance and presence. I appreciate the sacrifices she has made in her career and the investments she has made in SLU and St. Louis. I feel blessed to be here together, continuing to share our life now in St. Louis.”

“We’ve had intertwined lives wherever we’ve been,” she said.

And you know what? It always works out. 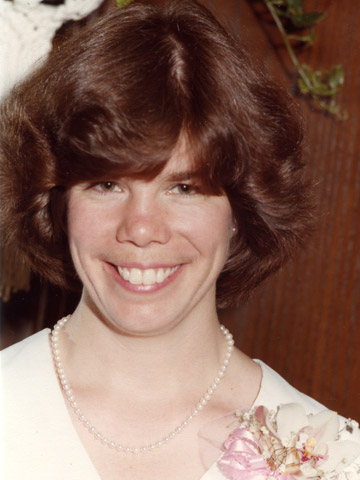 Fran Pestello after her wedding reception, in 1981. Submitted photo

First Date with the President: “Our first ‘official’ date was an evening walk in one of the parks in Akron. He arrived at my door with a bouquet of pink sweetheart roses. To this day, he surprises me with fresh flowers.”

First Child: Vitina. She also has a son, Freddie.

First Place to Look for Her at SLU: Samuel Cupples House, her favorite campus building. She also loves Chaifetz Arena during men’s and women’s basketball games.

First Time She Felt Like a St. Louisan: When she used the landmark Amoco sign at Highway 40 and Skinker Boulevard to navigate.