Talking About My Generation

When you think back to college, what comes to mind? Countless hours in class? In the library or lab? Late-night cram sessions? That 40-page term paper? Maybe.

Or maybe you recall the time in bolded headlines. A war that started or ended. A nationwide trend. 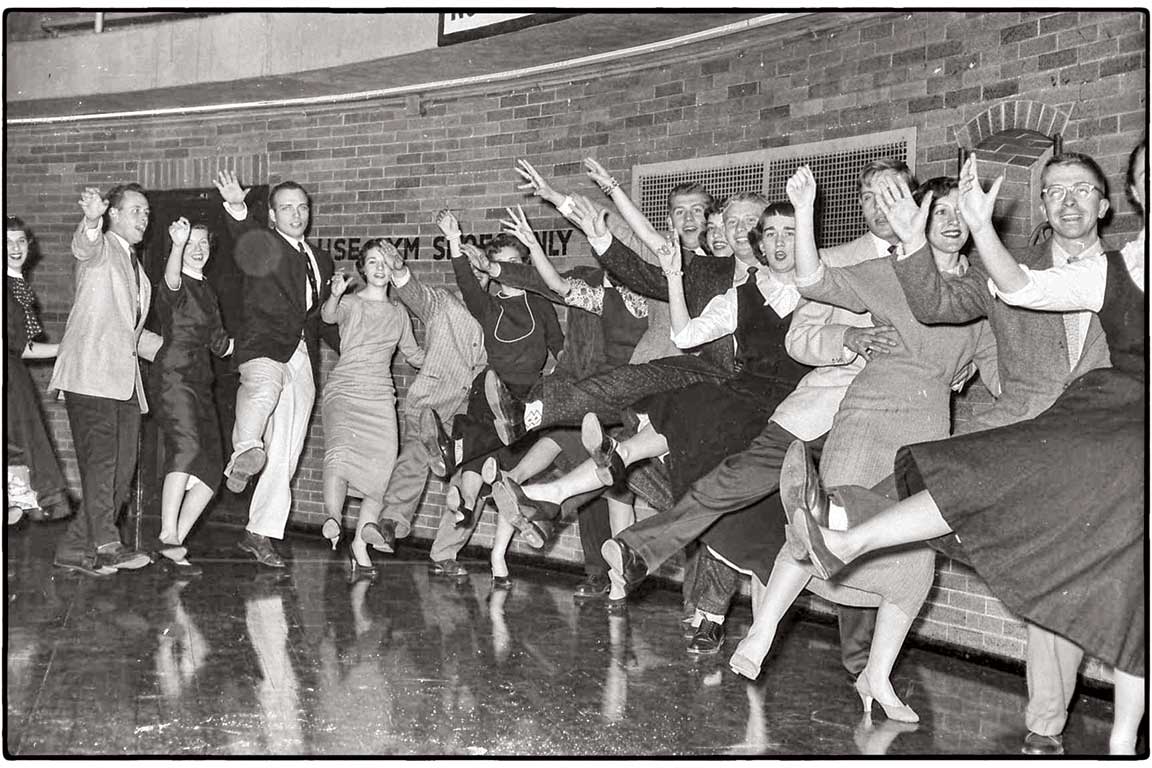 But probably, what you remember most is the time between classes, away from books, apart from the rest of the world. When you found your passion for service or student government. When you donned a formal and danced the night away. Playing on the field or sitting in the stands. At the bar or café. Among friends.

What stands out about your time at Saint Louis University? Take a look at some of the things that defined the most recent generations on campus in St. Louis. 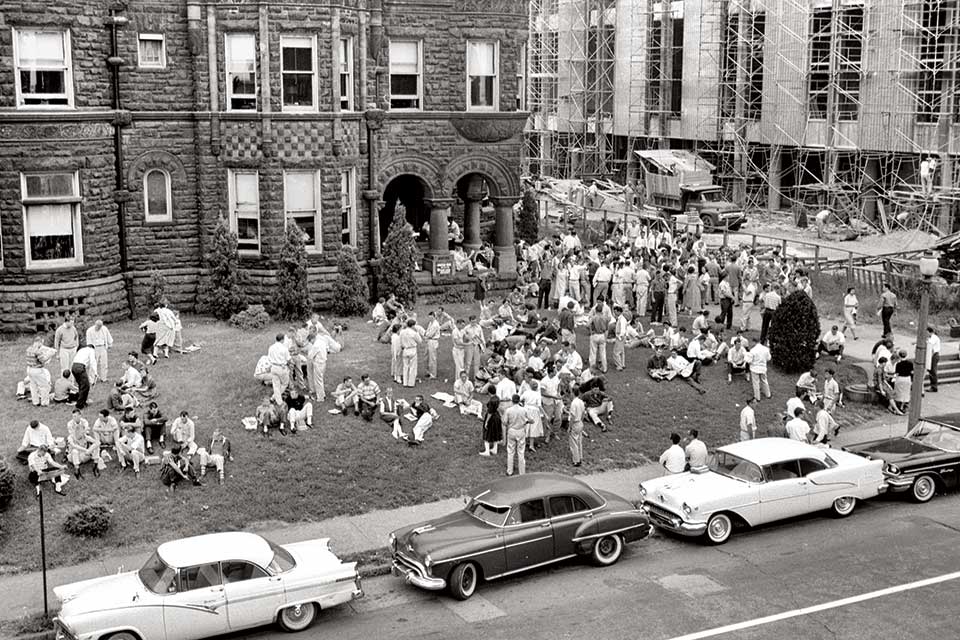 As hundreds of SLU students leave for World War II, women rise to the occasion. Postwar, the SLU population swells thanks to the GI Bill. The first African-American students are admitted, and the College of Arts and Sciences goes co-ed. Hardly anyone lives on campus — people commute via bus and streetcar. Catholic students must attend Mass on Fridays, until the trustees end the requirement in 1956.

Sadie Hawkins Day is inspired by a 1937 Li’l Abner comic strip that encouraged women to act first instead of waiting to be asked for a date. SLU students dress like the comic characters and have farm parties and dances. The 1941 Archive yearbook calls it “one of the most successful social events of the year,” and it gets bigger as the years go on. Sodalities — with units for specific schools, as well as one for women of the University — encourage Catholic activity by hosting everything from Communion breakfasts to chili suppers, lad-dad “smokers” to penny carnivals. Student Conclave sponsors all-University activities, including rallies before and parties after basketball games, lectures and formal dances.

SLU has a football team until 1949. A close rival is Washington University, which inspires the rally cry, “What do we eat? Bear meat!”

Students gather in DuBourg Hall, in separate lounges for women and men. In 1946, Chouteau House (later, Samuel Cupples House) becomes the SLU student union, and the front lawn is a popular spot when the weather’s good. Later, students eat and play cards in the cafeteria in the brand-new Des Peres Hall.

Austrian Archduke Otto von Habsburg, as well as the von Trapp Family (of The Sound of Music fame).

Quonset huts are placed on the quad to accommodate returning soldiers.

Usselman’s Market for sandwiches. Piccadilly Restaurant and Bar, and Kangaroo Grill in the Melbourne Hotel (now Jesuit Hall) for dinner with the parents. The Jug Restaurant in the Coronado Hotel. Bars on Olive, frequented by GIs, who tended to be older than the typical student population.

In 1941 The University News hosts an essay contest, and the prize is tickets to see the Glenn Miller Orchestra at the Fox Theatre, a movie house at the time. 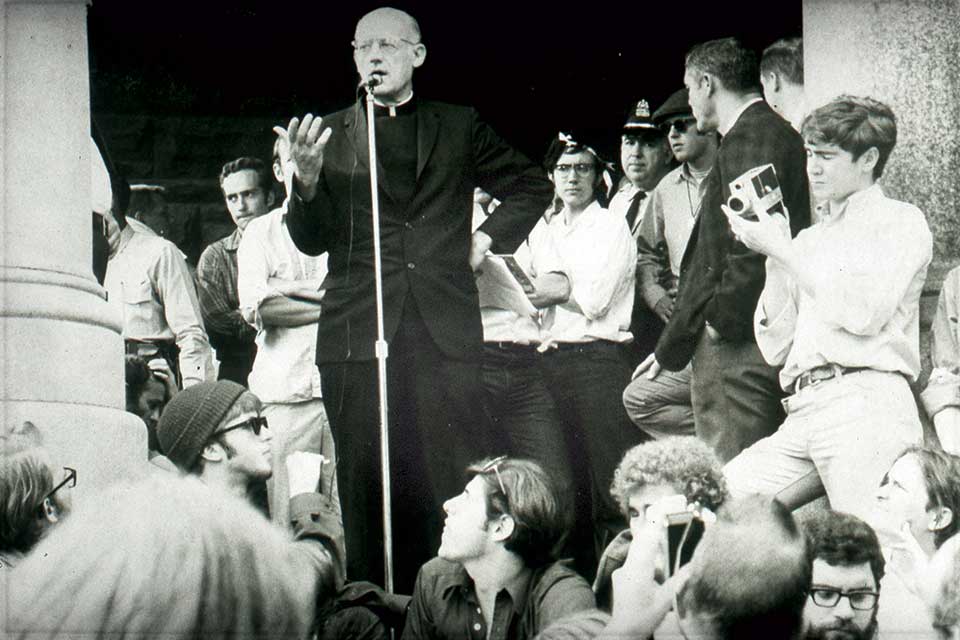 SLU President Paul Reinert, S.J., addresses protesters from the steps of Cupples House in 1970. Students demanded the removal of the ROTC office from Cupples (then Chouteau House). Reinert resolved the protest peacefully.

The Baby Boomers come of age, and the world turns upside down. The civil rights movement, conflict in Vietnam and confrontation at Kent State reverberate across the country. Universities become hotbeds of political activity, and SLU is no exception, as protests flare up on campus.

Athletics
Men’s soccer dominates, winning 10 of 15 NCAA Division I championships between 1959 and 1973. Students head to the St. Louis Arena (later, the Checkerdome) to cheer on the Hockey Billikens, an NCAA Division 1 team during the ’70s.
Between Classes

Pius XII Memorial Library, which opened in 1959, gives students a new place to study (or chat or nap). In 1967, Busch Memorial Center becomes the place to hang out, eat and even get a haircut.

President Lyndon Johnson; Rev. Dr. Martin Luther King Jr.; Marshall McLuhan. The St. Louis Literary Award — then called the Messing Award — is created in 1967, and over the next decade brings to campus W.H. Auden, Tennessee Williams and other literary greats. The Byrds and The Nitty Gritty Dirt Band play the SLU gymnasium.

Usselman’s Market is especially popular with commuters. For burgers, there’s Burger Chef, The Fatted Calf and The Best Steak House. Pastori’s or Pie-In-the-Sky (above Clark’s) for pizza. A few blocks west of campus, Rossino’s sets the scene for many a first date. Drinks at Free Advice, which becomes Humphrey’s in 1976; Fridays, which becomes Clark’s; Bogart’s; Loading Zone; The Fifth House and Ballhooters. 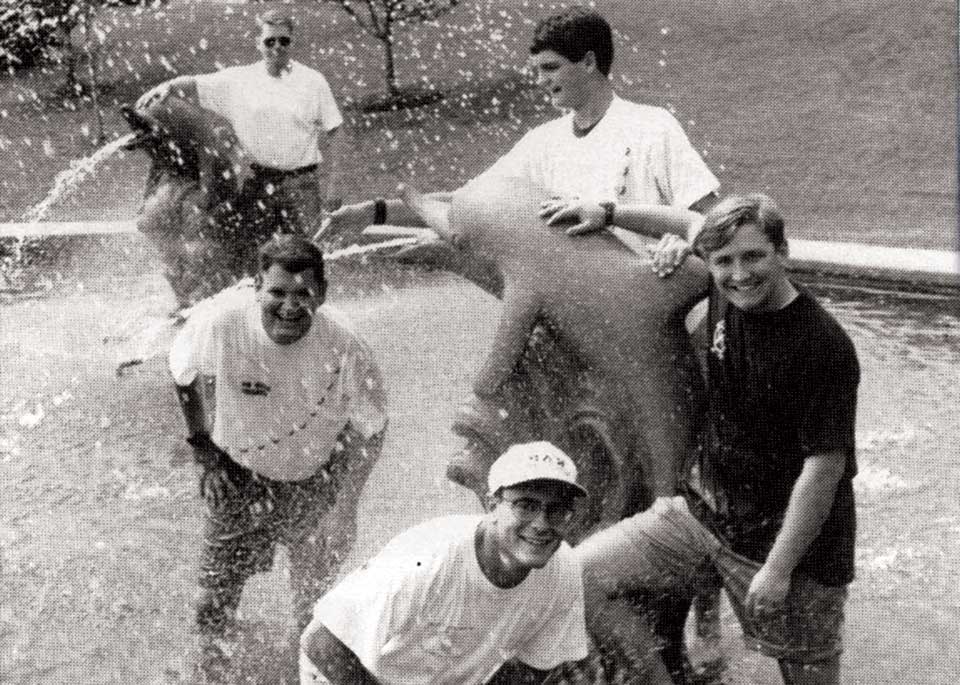 Students frolic in the dolphin pond in the mid-’90s. File photo

Gen X has a slacker reputation — but not at SLU. As the University expands in all directions, more students than ever live on campus and revel in college life. Some say this is a more careful cohort, coming of age amid “Just Say No” and the AIDS crisis. These students are among the last to be allowed to smoke in their dorm rooms and the first to get SLU email addresses.

Men’s basketball gets better and better. Students find rides downtown to the old Arena and then to the Kiel Center to cheer on the Billikens. In 1989, the team goes to the NIT championship. “Spoonball” (under Coach Charlie Spoonhour) is a big deal in college basketball, with the Billikens ranking in the top 10 in attendance for several seasons in the ’90s.

SLU runs three co-ops, which are good for grabbing a newspaper, snack or quick lunch. The main co-op is in Clemens Hall, just off the quad. For students looking to burn off energy, Simon Recreation Center opens in 1981. On nice days, the dolphin pond is a great place to chill.

Parks College moves from Cahokia, Illinois, to St. Louis in 1997. The clock tower becomes the newest campus landmark, part of a project that closes West Pine Boulevard between Spring and Vandeventer avenues. The Caroline Street mall encourages foot traffic on the health sciences side of campus. New garages on both sides of campus make metered parking a thing of the past for many students.

Fountains and statues, which crop up all over campus.

Quick bites at Sloopy’s Sub Shop, Magic Wok and Naugles (which becomes Del Taco). The Best Steak House and Rossino’s remain popular. Flaco’s Tacos for some of the area’s first fresh Mex. For pizza, Vito’s or delivery from Imo’s or Domino’s (pay with a check). For drinks, the pub in Busch Center and the bar in the Ramada Inn (later Reinert Hall). Head just off campus to penny pitchers at Humphrey’s; Billiken Bench Club (a.k.a. the BBC); Caleco’s, which offers a $1 dinner happy hour buffet in the ’80s (and later becomes Laclede Street Bar and Grille); 20 North; Bullfeathers; and Clark’s Bar, which becomes The Grind coffeehouse in the ’90s.

Gutsy undergrads break in and climb to the top of the dilapidated Continental Life Building, a.k.a. “the Superman Building,” in Grand Center. The Fox Theatre reopens. 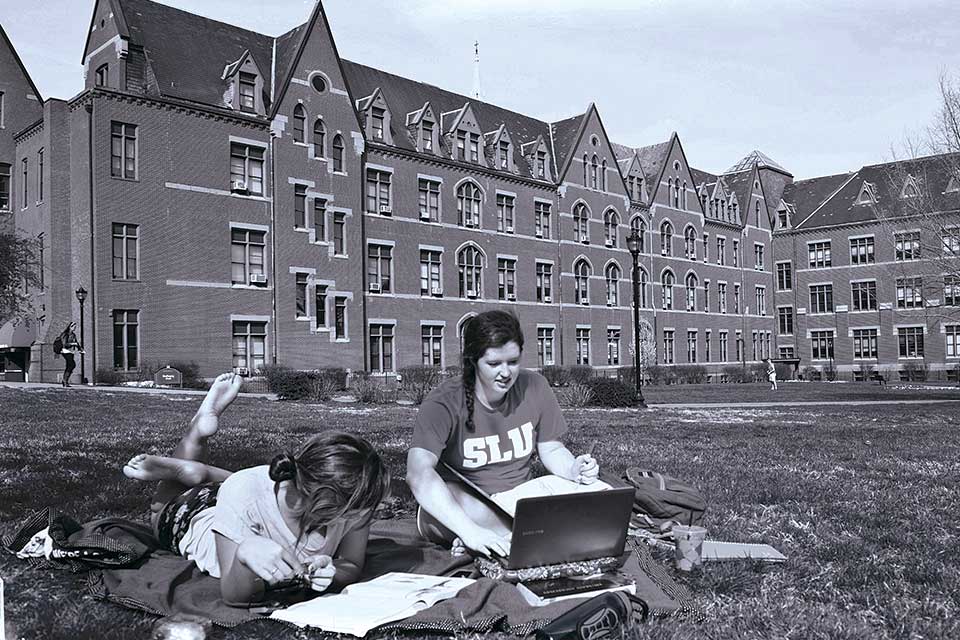 Students take advantage of good weather and WiFi in the quad in 2013. File photo

Millennials live in the digital world. They are connected — to each other, to their “helicopter” parents, to people all over the world — and value collaboration and diversity. They compose assignments on their smart phones and turn in everything online. Early on, they witness 9/11 and then gun violence again and again, which prompts activism across the country and on SLU’s campus.

Service activities get even more popular: Saturday mornings with Alpha Phi Omega; Make A Difference Day, first held at SLU in 1998; Campus Kitchen; Relay for Life; Dance Marathon. This is also the SLU generation that embraces a cappella, first with the Bare Naked Statues and then other groups. The Sunday Mass moves up an hour to 9 p.m. and continues to attract hundreds of students each week. Sam and Marilyn Fox Atlas Week highlights and celebrates the international aspects of SLU.

Men’s soccer garners top attendance in the nation in 2001. The Billikens join the A-10 conference. Under the guidance of Coach Rick Majerus, men’s basketball heads to the NCAA tournament. A new Billiken mascot debuts.

Students head to the quad for everything from walking on slacklines to relaxing in hammocks. The Busch Student Center undergoes a massive renovation and expansion.

St. Ignatius shows up in the middle of the quad. Doisy Research Center and Chaifetz Arena open. The law school moves downtown.

SLUruba, a swimming oasis in the middle of campus, once even featuring palm trees.

Students shop for residence hall supplies at Ikea and watch movies at Moolah Theatre and Lounge.