A SLU program helps retirees and soon-to-be-retirees prayerfully plan for their next chapter in life. 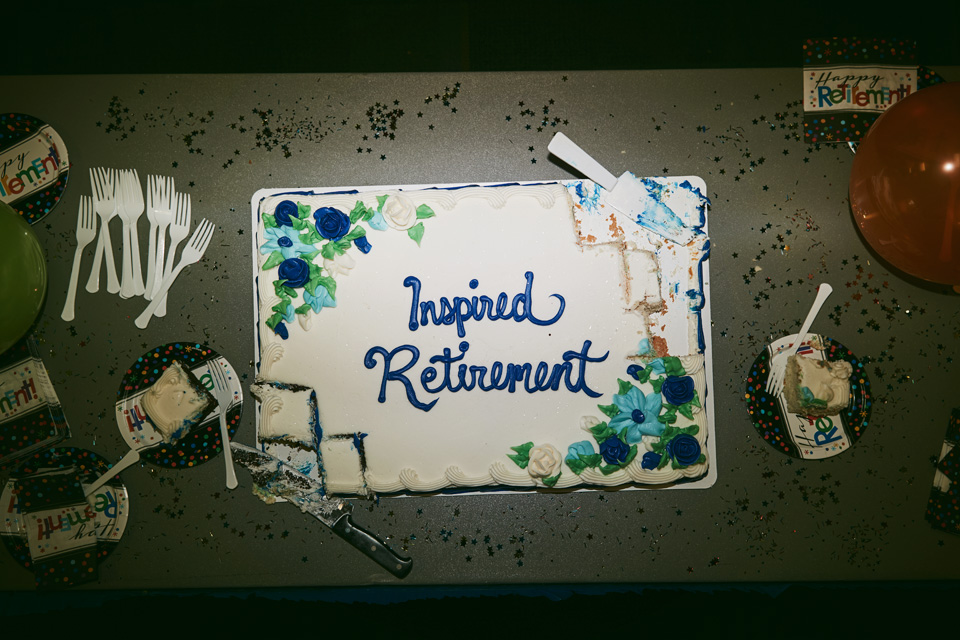 The 63-year-old executive director of the St. Louis Community College Foundation said it will be hard to detach from the rewarding professional career she’s had.

She served as assistant to the chancellor at Saint Louis University, district director for Sen. Christopher “Kit” Bond, caseworker for Sen. John Danforth and director of external relations for Monsanto.

“Imagining retirement is like standing at the edge of a cliff,” she said. “But, when you look around the conference table and see fewer and fewer people your age, you’re forced to think about it. Some of my family and friends have retired gracefully. Others have jumped in and a year later ask, ‘What now?’ If you don’t have productive and purposeful engagement, what do you do all day?”

Thomas Auffenberg (Law ’80) had little trepidation about retirement but wasn’t sure what
came next. During his career, he taught high school philosophy and English, practiced law for more than a decade and ran a marketing and printing business for 25 years.

Several years before retiring, he participated in a program offered by the Halftime Institute, a faith-based program out of Texas that helps retirees and soonto-be retirees find significance in the next stage of life. Through this program, Auffenberg found his encore.

The better you know yourself, the more aware you are of your strengths and spiritual gifts, the better you are able to hear God’s voice, the more easily you’ll find the best fit for you in your next stage of life.”

He developed the curriculum for a six-month guided journey to help people tap into their spiritual strength and find God’s voice in their retirement planning. Auffenberg grounded the program in Ignatian Spirituality with emphasis on the Examen, a form of daily prayer that helps one detect God’s presence and movements in his or her life, and by introducing Ignatian discernment, a process that assists one in hearing God’s voice in life decisions.

“Rather than operating solely out of intellect and weighing the pros and cons, the curriculum helps participants approach their retirement decision in a thorough, prayerful way,” he said. “The better you know yourself, the more aware you are of your strengths and spiritual gifts, the better you are able to hear God’s voice, the more easily you’ll find the best fit for you in your next stage of life.”

Auffenberg, who worked with SLU to establish the Contemplative Leaders in Action program for young adults, thought SLU would be a good fit for this retirement program as well. He titled the program the Next Chapter.

“The University does a wonderful job of preparing students for their careers,” Auffenberg said. “It makes perfect sense that the University would reinsert itself in people’s lives and offer guidance in preparing them for their retirement years.” 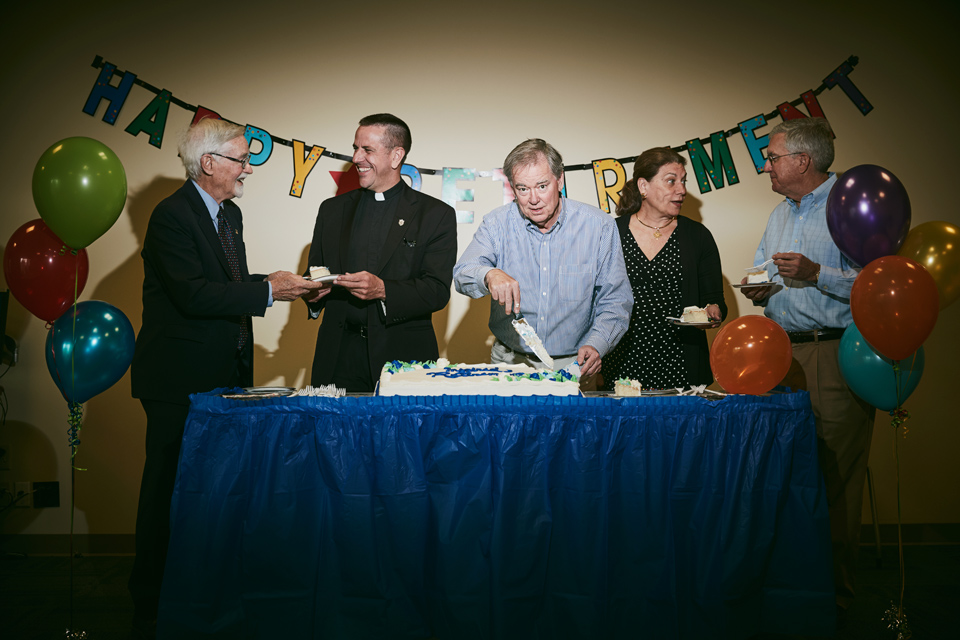 Auffenberg brought his idea to Christopher Collins, S.J. (Grad A&S ’01), assistant to the president for mission and identity, who, as it turned out, also was contemplating outreach to mature alumni. Collins had been noticing in casual conversations an increasing number of alumni expressing uneasiness as they approached retirement. A few years ago, he offered two overnight retreats for those nearing retirement, both of which were well attended.

“It is clear a demand exists for spiritual guidance as people enter the next phase of life,” he said. “The Next Chapter allows them to use their faith to shed light on their future and restore their sense of purpose and mission.”

Auffenberg and Collins worked together to launch the Next Chapter at SLU in 2017.

Digman was one of the 33 inaugural participants, all of whom were pre- and post-retirement professionals in their late 50s through late 70s. Participants met monthly for large and small group discussions guided by Auffenberg, Collins, and SLU faculty and other experts. Participants shared readings and reflections; attended six monthly meetings, including a panel presentation on volunteer opportunities and ways of researching other service possibilities; a daylong retreat; and two follow-up sessions.

“The program allowed me the luxury of being more mindful about how I’d like to approach the next few years of my career and my future,” Digman said. “Sharing the experience with others made the journey richer because we searched together for what ignites our souls and gets us excited.”

For Digman, her journey of discernment may lead to working with a faith-based international nongovernmental organization or with orphans in developing countries.

Michael Schilling’s parents instilled in him a strong work ethic. Now a district court judge in the Eighth Judicial District of Iowa, he worked as a criminal lawyer, a lawyer with Inter-Tribal Legal Services and a drug court judge. The idea of free falling into retirement with no plan provoked anxiety.

At the time he was contemplating retirement, Schilling had a son in a Jesuit novitiate in New York. Schilling was looking online for a retreat to learn more about the Jesuits and Ignatian spiritual exercises when he saw information about the Next Chapter and clicked on it.

“I was blessed to have found it,” said Schilling, who went through the program with his wife, Julie. They drove four hours from Burlington, Iowa, to St. Louis to attend sessions.

“I was challenged to identify not only who I am but who I want to be,” he said. “The program helped me identify my strengths and weaknesses and to shine some light on my blind spots. I learned it’s OK to do things that bring me joy and to take more quiet time to listen to the Lord.”

Auffenberg said people often are so caught up in work that they forget what truly makes them happy and fulfilled.

“Reconnecting with our faith and developing greater self-awareness through thoughtful reflection is a great way to get back there,” he said. “We encourage participants to develop a habit of daily prayer to allow for this growth.”

Schilling said while he isn’t quite ready to retire, the program did in six months what he couldn’t do in five years — convince his wife, a public health nurse administrator, to retire. Schilling said he is close behind her. When he retires, he hopes to serve as a mentor to young adults.

Turning Off the Lights

Rene Lusser (Cook ’60, Law ’62), age 81, thought he’d die with his boots on, but after practicing law for 57 years — the last 10 as an advocate for abused children in the St. Louis County Juvenile Court system — he began to reconsider. He was worn out by the daily stresses but didn’t know how to stop.

“So much of my self-worth has come from my identity as a lawyer,” he said. “When people ask me what I do for a living, I say trial lawyer, and they say, ‘Oh, that’s wonderful.’ When my contemporaries say they’re retired, it’s almost with a down tone. That’s what concerned me. If I’m not a lawyer, what am I? What am I going to do? I like working with flowers, but you can’t do that all year.” 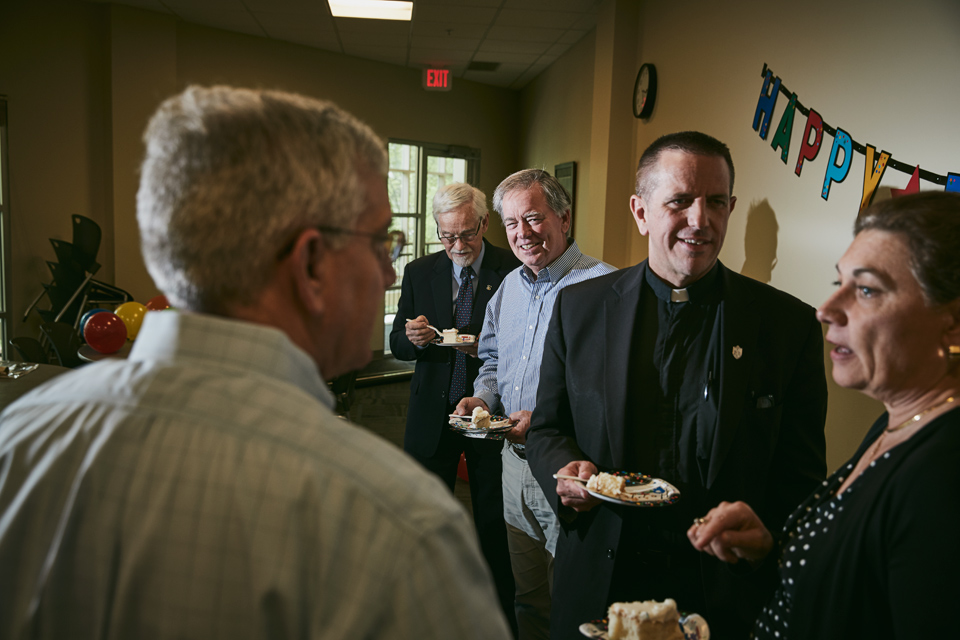 Lusser read an invitational article about the Next Chapter in the St. Louis Review, the St. Louis Archdiocese’s weekly newspaper.

“During the course of the program, I discerned that there was more that God wanted me to do,” he said. “When I finally turn off the lights in my law office, there are other ‘rooms’ I can walk into. I can still have a life with purpose.”

After participating in the Next Chapter, Lusser planned to retire in December 2018. He missed the target but not by much. He has slowed down considerably. He is not accepting new clients, and he reduced his office space and overhead by half. He said he will retire later this year to spend more time with family, volunteer at the Missouri Botanical Garden and maybe learn to play the harmonica.

When Tony DiLeo (Law ’79) contemplated retirement, he thought about his father, an OB-GYN who retired at 65. “Although he planned well financially for his retirement, I’m not sure he devoted enough time to planning how he was going to spend his time during retirement,” said DiLeo, a retired senior tax counsel for Ameren. “I wanted to put a lot of thought into it. I wanted a structured process to help me determine what retirement would look like.”

DiLeo, a devout Catholic, chose the Next Chapter due in large part to the program’s spiritual core. He also liked taking a structured approach to retirement.

DiLeo gave his retirement notice to Ameren just before starting the Next Chapter.

“The timing was perfect” said DiLeo, who is devoting his post-retirement time to family, friends, travel and lending support to the pro-life movement.

DiLeo, Lusser, Digman and Schilling said one of the most powerful aspects of the Next Chapter was going through the journey with others. Although they graduated, members of their cohort continue to meet periodically to touch base.

Collins said in addition to nourishing participants, he hopes the Next Chapter brings alumni closer to the University and reinvigorates within them the University’s mission of serving others.

“I think it would be neat to see our alumni and other participants continue making contributions to the region, to feel somewhat empowered by the University to do this,” Collins said. “The ripple effects would be tremendous.”

For Auffenberg, it’s not enough for participants to have a better sense of what their retirement might look like at the end of the program. He wants them to have a written plan and a process for updating it as the circumstances of their lives change. Participants start with a personal mission statement, and he walks them through the discernment process with targeted completion dates. He challenges participants to identify:

Auffenberg said he would like to see the Next Chapter offered by other Jesuit and Catholic universities across the country. For more information about the program, contact Auffenberg at tauffenberg@contemplativeleaders.org.