More and more SLU students are expressing themselves through dance.

The music is catchy, the moves are sharp, and the costumes — from multicolor sequins to tartan plaid — are fabulous.

One afternoon in February, six of SLU’s student dance groups took to the stage in Xavier Theatre to show off their skills and celebrate all things dance at SLU. These six groups exemplify today’s Saint Louis University dance community: diverse, enthusiastic and growing. In recent years, the number of dance teams on campus has climbed, and today, nearly a dozen groups bring an impressive range of dance styles and world rhythms to SLU.

The dancers themselves have a lot to say, both on stage through their choreography and musical selections, and off stage, as they talked about why they dance, some of the biggest misconceptions about the dance styles they’re so passionate about, and what they love about SLU’s dance community writ large. 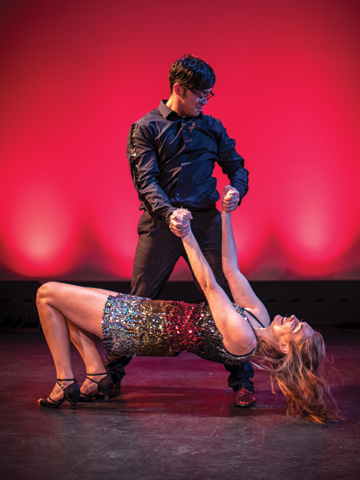 Alex Ocasio (A&S ’09, Grad A&S ’12) was a SLU graduate student teaching an intro to salsa dancing class at Simon Recreation Center when he was asked to put together a Latin dance team virtually overnight for a multicultural event on campus. Embracing the challenge, Ocasio recruited some willing students, and Sazón (pronounced say-zahn), SLU’s acrobatic salsa team, was formed. Today, the team has nearly 40 members.

What exactly is acrobatic salsa? For Sazón, it means borrowing lifts, dips and tricks from many genres of dance and infusing them with Latin rhythms. Ocasio, who still leads the team, prides himself on teaching beginners how to become acrobatic performers, emphasizing proper technique and safety.

The team has attracted a diverse group of Billikens.

“I have students from literally around the world — from Mexico to Chile to Peru to Iraq to the Philippines to Puerto Rico and beyond. While a handful of the team’s members have some sort of dance background, most of the members came to the team with just an interest in Latin dance and a willingness to learn,” Ocasio said.

Sazón has performed on campus and off, partnering with a dance team from Washington University in St. Louis, as well as performing for a national gathering of the Girl Scouts and participating in a citywide international student event, which brought together students from five colleges.

Three years ago, four students with a shared passion for classical Indian dance decided to bring the dance form — among the oldest in the world — to SLU. They started Omkara (pronounced ohmkar-a), a dance team that is part of SLU’s Hindu Student Community. The group has since grown to 15 members. 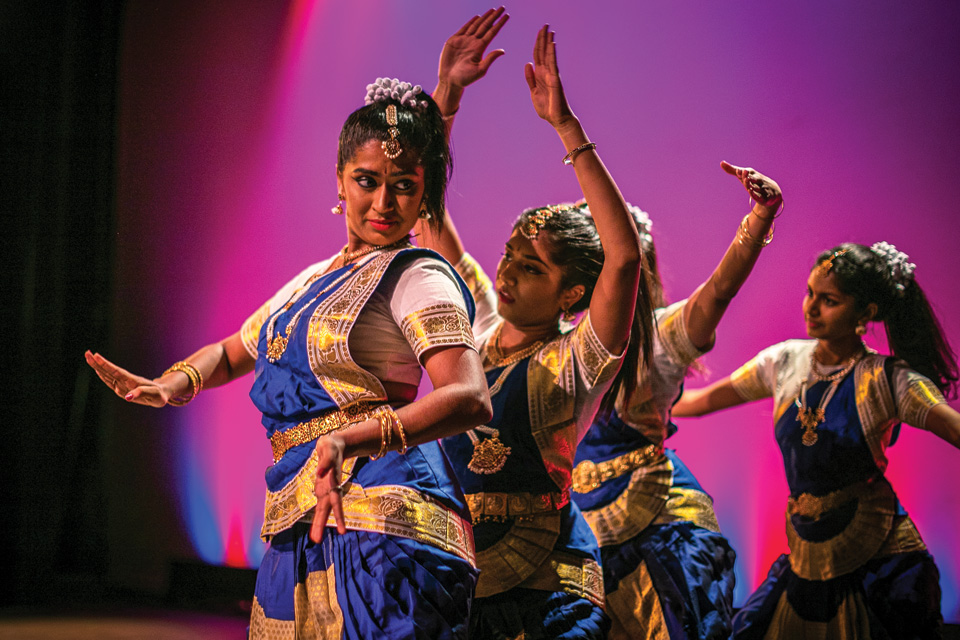 For biology major Nisha Rao, being part of Omkara offers an opportunity to reshape people’s perceptions.

“A lot of people view traditional Indian dance as something outdated, but we’re bringing new life and new light to an old art form,” Rao said.

To that end, Omkara’s performances retell stories from traditional Indian mythology and literature through a 21st-century lens.

Aiswariya Ramaswamy, a health management and biology major, explained: “We’re working on a piece that’s telling stories from Hinduism and connecting them to modern day themes, such as women’s empowerment. We’re intertwining the stories from Hinduism to how we can connect with them in our world today.”

The team’s members have been blown away by the reaction from the SLU community.

“Media sometimes portrays Indian classical dancing in a way that doesn’t reflect what it really is. It’s often portrayed as sillier than it really is. It’s actually such a rich and beautiful art,” said Juhi Nayak, a health management major. “Now that we’ve brought it to SLU, people have realized how cool classical Indian dance is rather than just associating it with what they see in movies.” 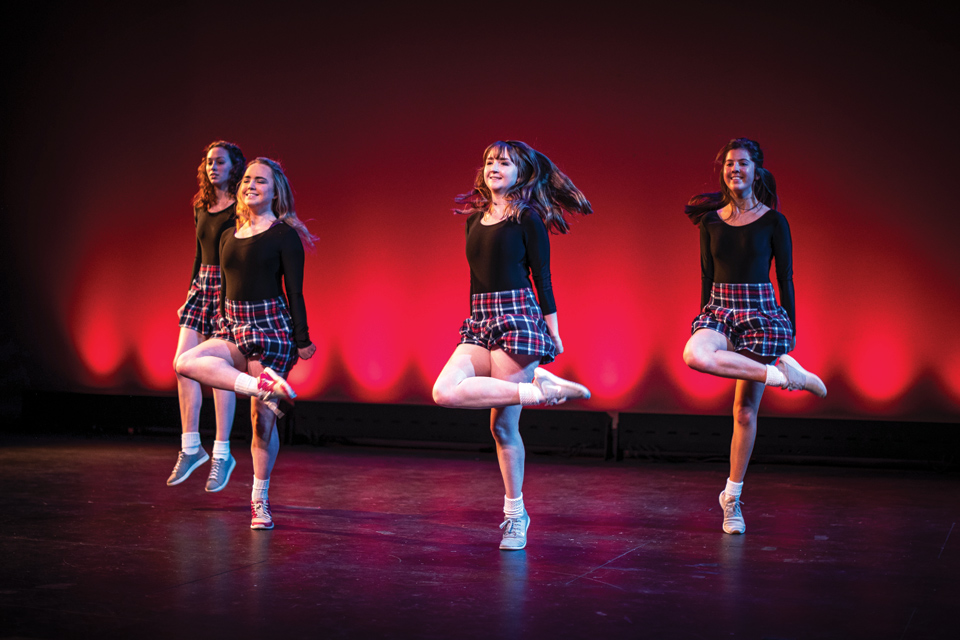 Although the Elevation Irish dance  team has been on campus for about a decade, it wasn’t until a few years ago that the team decided to start entering intercollegiate competitions, taking their team to the next level. Over time, their performances have become more creative, and the team has been seeking out more ways to connect with teams from other universities. Last year, Elevation helped launch the first collegiate competition at one regional Irish dancing competition.

“That was a really big deal for us and a real landmark for Elevation” said Bridget Corcoran, Elevation president and investigative medical science major. For Corcoran, who began dancing when she was 4 and danced competitively into high school, finding others at SLU who shared her passion was a rewarding surprise.

“The best part of being in Elevation is meeting people who are just as into this weird world of Irish dancing as I am,” she said. “For those who competed in grade school or high school, it’s your whole life, and few people you’ll meet can relate to that. To come to college and meet people your age who share that is super fun. There’s a pretty big Irish dance community at SLU.”

“We’re technically an urban dance team,” she said. “Hip-hop is more specific than most people realize. It has its own culture and style of moving. Urban dance is a more general term for what people often think of as hip-hop. It represents a bunch of substyles, which are changing all the time.” 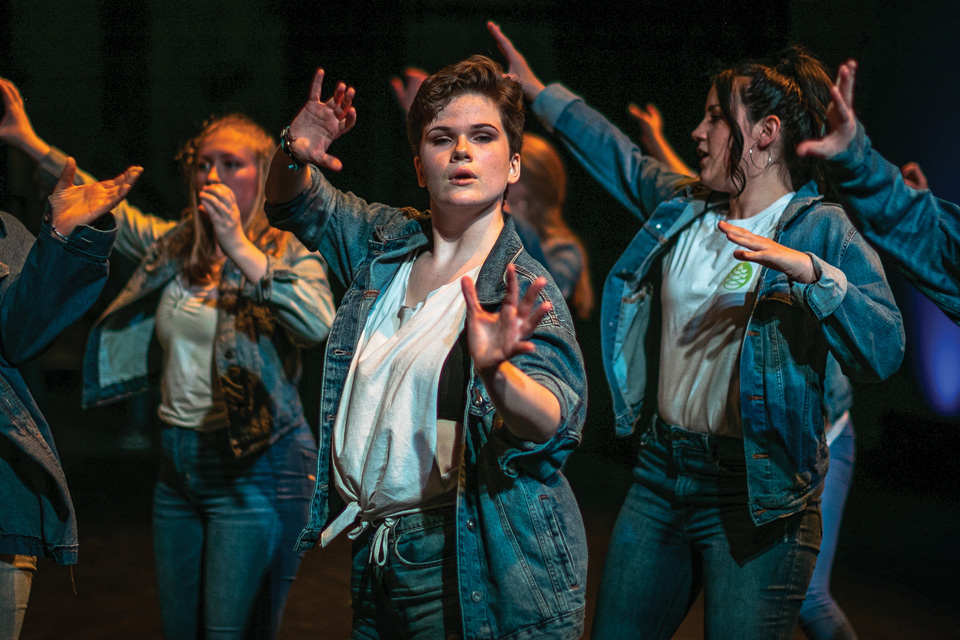 The team’s 25-plus members range from those with zero dance experience to those with experience in another style of dance, such as ballet, contemporary dance and even belly dancing. That diversity comes in handy when it’s time to choreograph, and all members are encouraged to collaborate on the group’s routines.

Maalouf sees this dance diversity as a strength not only for XQuizit, but for the larger SLU dance community.

“It’s awesome that there are so many different types of dance teams,” she said. “I wish all of the teams put on more workshops. I’d take them all!”

K:ODE (pronounced code) is SLU’s “Ode to K-Pop” dance team, which formed in 2014 as a small group of friends united around their love for Korean pop music and dance. Today, the group is 31 K-pop aficionados strong.

Most of K:ODE’s members don’t have formal dance training; they are just people who enjoy dancing and appreciate K-pop. 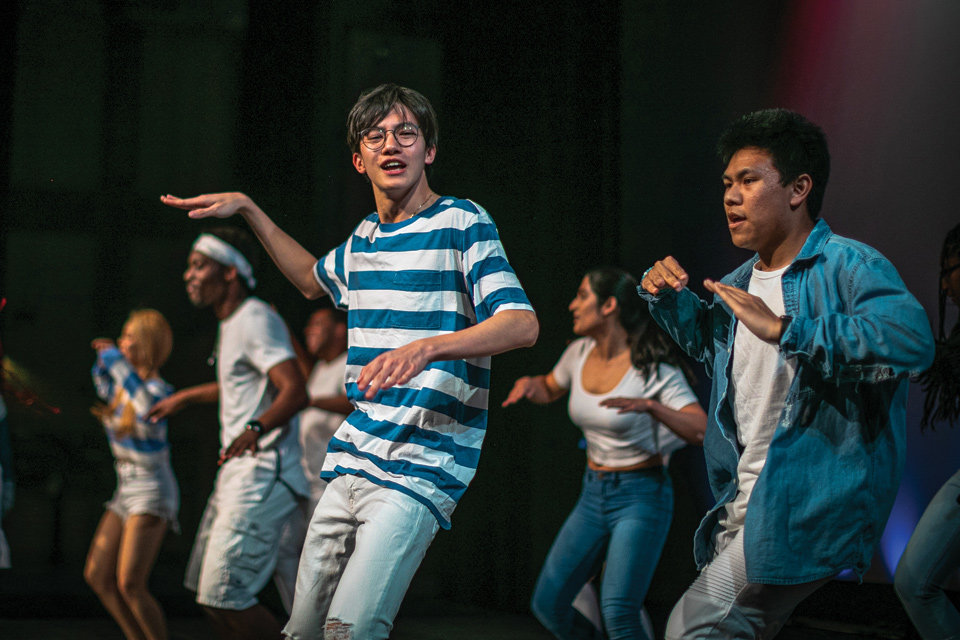 “The common perception of K-pop is that it’s only fluffy, bubblegum kind of pop, like the stereotype people have when they think of boy bands or girl bands. But K-pop is unique in that the hard work and training years required to be a K-pop star are actually very intense. There are people who have been with their K-pop agency just as trainees for 10 years before they debut as a K-pop idol,” graduate student Luella Loseille (A&S ’17, Grad Ed ’19) said.

K:ODE is always looking for opportunities to collaborate with other teams, inviting members of other dance groups — and from SLU’s many a cappella groups — to perform alongside them. For Loseille, those connections with other performers are key.

“The SLU dance community has been a big part of my time here, both as an undergrad and now as a grad student,” Loseille said. “I’ve always been involved, dancing first with XQuizit and now with K:ODE. SLU is unique in that we have such diverse styles of dance available on campus, but at the same time, it’s no issue for these different styles to collaborate.

“At the end of the day, we all enjoy music; we all enjoy dancing. There is a beautiful harmony in dancing together as a group and just enjoying each other’s presence. The dance community here on campus is pretty cool,” she said.

Like XQuizit, Phases of Motion’s dance style is a bit hard to define. Watching Phases perform, you might recognize elements of jazz, ballet, modern, lyrical, contemporary and tap dance — a combination that reflects the diverse dance backgrounds of the group’s 13 members.

While most of the Phases dancers come to the team with some classical dance training, Natalie Seidl, a communication sciences and disorders major, said the path to that training was different for each member. 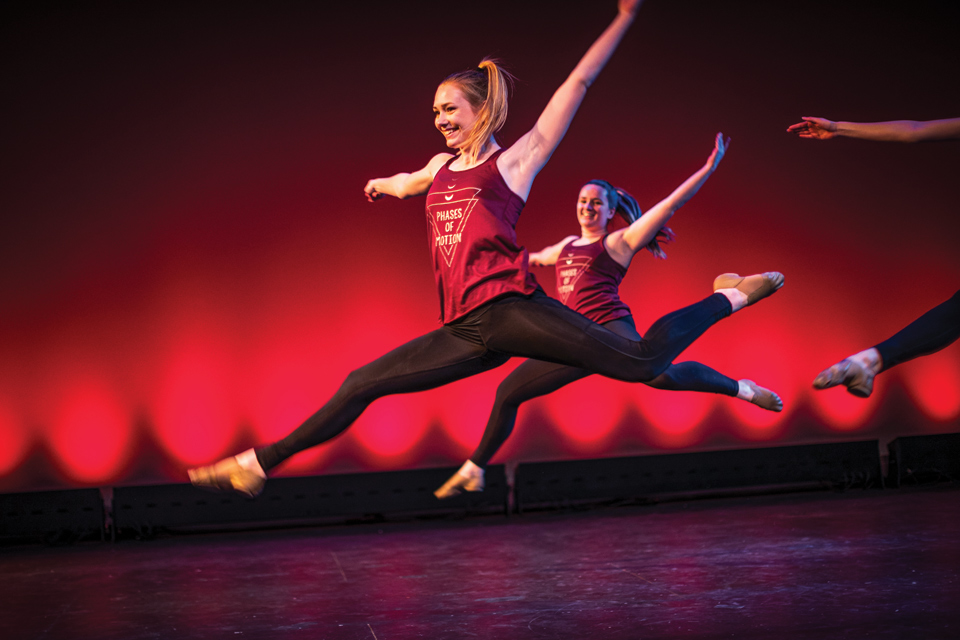 “We have gymnasts and figure skaters. I myself come from more of a musical theater background, and we’ve had people from color guard. It’s really cool blending all those styles together, and everyone has a unique thing they bring to the dance team,” Seidl said.

Before coming to SLU and auditioning for Phases, health sciences student Haley Grimes assumed she’d leave dancing behind after high school. The opportunity to continue to dance has been an unexpected highlight of her years at SLU.

“Dance is such a creative outlet. With everything going on — with studying and classes — it’s a great way to take things off of your mind. In addition to being a great creative space, it’s a chance to get some exercise and hang out and have fun with friends,” she said.

For Seidl, that connection with teammates is everything.

“Phases has always been a safe place to dance. It’s a judgmentfree zone, and all the girls are really supportive. It’s a smaller family, a tight community, and it’s really nice to get to know all these other girls I wouldn’t have met
otherwise,” Seidl said.

SLU’s other student dance groups include:

Dance in the Classroom

In response to the thriving and growing  dance community on campus, SLU's Department of Fine and Performing Arts now offers a dance minor for undergraduate students. Courses cover a variety of dance techniques, along with choreography and allied crafts such as music and theatre.