For writer and coach Angela Lewis (A&S ’04, Grad A&S ’07), basketball is at the center of everything. 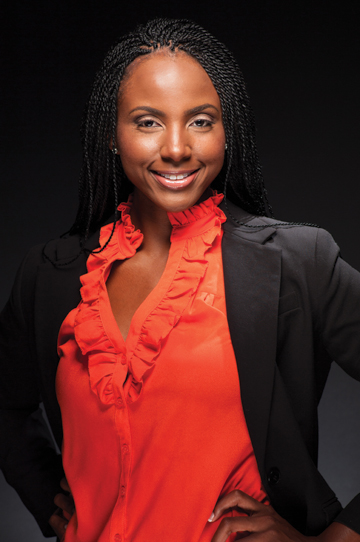 Lewis’ earliest memories of basketball take her back to a rec center court on the north side of St. Louis. Even then, it must have been obvious she was destined for great heights.

“I’ve been 6'1" since the 7th grade,” she said with a laugh. “It wasn’t cool then to be so tall, but it definitely worked to my advantage.”

Lewis grew up the youngest of three. Her brothers played a lot of basketball around the neighborhood, and she tagged along.

“No one wanted to pick up a girl for their team,” she said. “But my brothers would get picked early and then convince the rest of the guys to pick me up, too. It was always two-for-one.”

Their mentorship paid off. Lewis lived up to her potential, landing a full athletic scholarship to Saint Louis University. In four years, she scored more than 1,000 points on the basketball court and earned a bachelor’s degree, majoring in communication and minoring in African American studies. After graduation, she traveled to Germany to play professionally — the first Billiken women’s basketball player to do so.

She spent a year abroad, then moved back home and started coaching — a new side of the game Lewis loved. During the next decade, her coaching career took off, from an assistant position at a high school to colleges to a professional team, across Missouri and then across the Midwest. She helped lead the St. Louis Surge, a professional women’s basketball team, to a national championship. And actually, wherever she was, she led girls and women to be their best.

Then, suddenly, one of her friends died of an undetectable heart defect, and the news made Lewis feel the need to pivot. She wanted to get back to St. Louis.

She found herself in the school district where she’d gone to high school. As part of the Department of Educational Equity and Diversity, Lewis worked with students like her younger self — participants in the voluntary desegregation program — to make sure they had the support they needed to graduate.

Another kind of coaching, she thought. To inspire the high-schoolers, Lewis gave pep talks and speeches to student groups — something she’d been called on to do in previous jobs. But her mother pushed her to do more.

“You’re not going to reach everyone just by giving speeches,” her mom said. “You should write a book.”

When she published her first book, "The Game-Changing Assist: Six Simple Ways to Choose Success," Lewis hosted a signing on the court at St. Louis Mathews-Dickey Boys’ and Girls’ Club, where her brothers had gotten her on the team all those years ago. She’d come full circle.

“Basketball is deeply rooted in me. Being on the court is the catalyst for everything else in my life,” she said. “It’s the core of what I am and what I’ll always do.”

She’s still on the court three to four times a week. In between private coaching and speaking engagements, she writes and strategizes her next big play. Her most recent book — "The Fundamental Game Plan: Every Basketball Player’s Academic and Athletic 12 Week Success Tracker" — came out in November.