The St. Louis Jesuits transformed liturgical music in the 1970s. During SLU’s Homecoming and Family Weekend, they performed together for the last time. 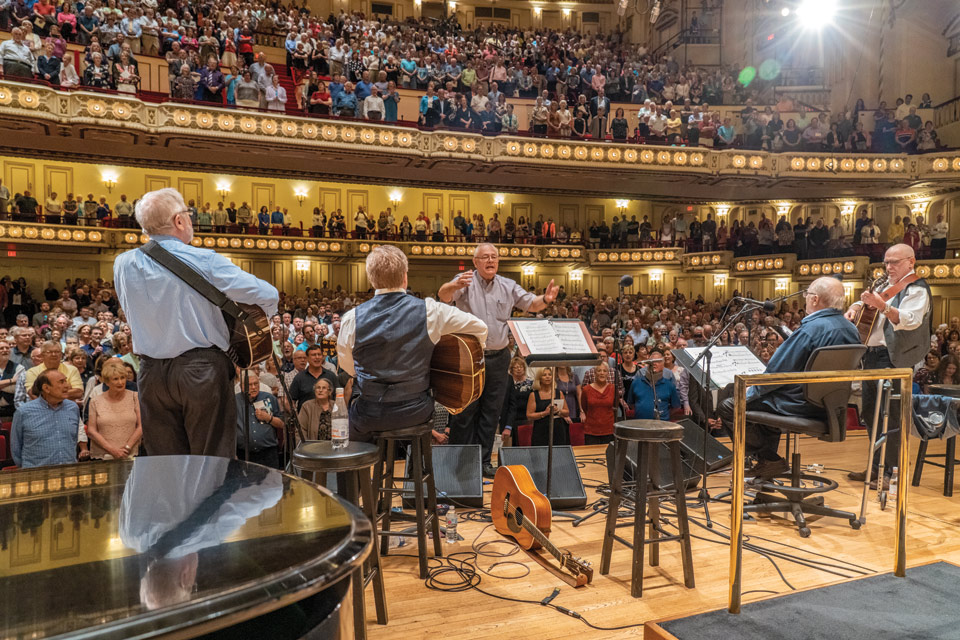 Powell Hall is positively flush with fans. It’s the last Sunday in September, and the place is packed hours before a mid-afternoon show. Out front on Grand Boulevard, a woman holds a homemade cardboard sign that reads, “I Need One Ticket.” Like a fan at a Grateful Dead show, she needs a miracle.

But what she and close to 2,650 others — a sold-out crowd — have come for isn’t a rock ’n’ roll reunion or the orchestra that calls the symphony hall home. They’ve come for five men who changed the sound of the Catholic liturgy.

They’ve come to hear the St. Louis Jesuits. And today the miracle is the music.

They’ve come for the songs they sang in Catholic school, the soundtrack to their sacramental lives. The melodies come to mind easily: “One Bread, One Body” during Sunday Mass; “Be Not Afraid” at funerals; “Sing to the Mountains” on a beautiful spring day.

As Saint Louis University’s Homecoming and Family Weekend winds down on campus a few blocks away, the St. Louis Jesuits take the stage for their last concert, Coming Home: A Final Celebration.

Fifty years ago, when they started composing music for liturgy, they were not known as the St. Louis Jesuits. They were just five young men with musical inclinations who happened to be at Saint Louis University at the same time, at various stages of Jesuit formation. 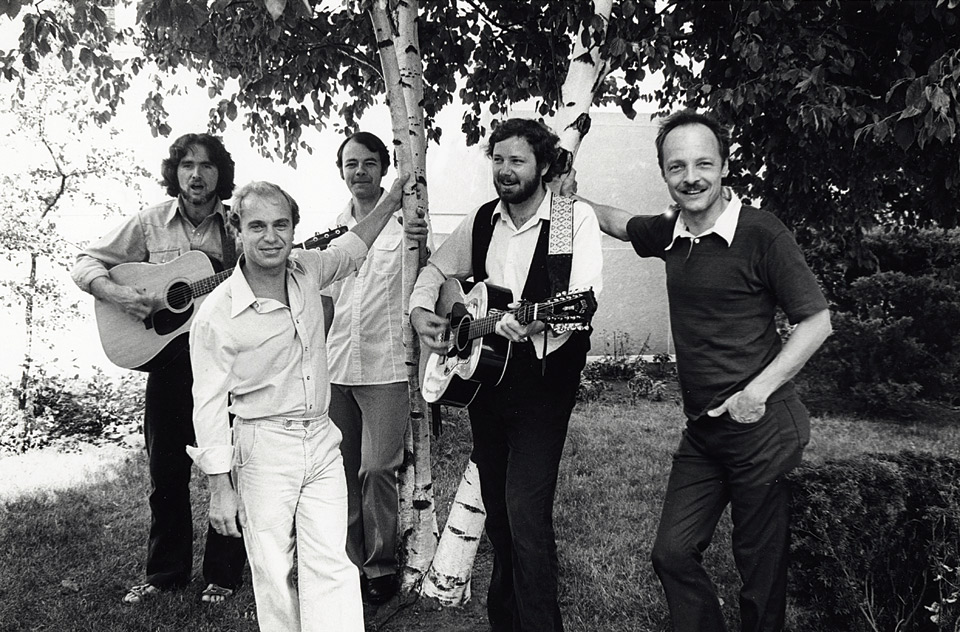 They converged at SLU at a point rife with change, just after the Vatican II Council transformed the way Catholics worship. The liturgy had become more personal, more connected with the human experience, and the music at the Fusz Hall Masses began to reflect that.

The five men had their own influences and inspirations — everything from the poetry of Gerard Manley Hopkins to classical music, Broadway musicals, and the folk songs and rock ’n’ roll that were popular in the 1960s and ’70s. But they shared a desire to compose songs anyone could sing that were also sophisticated and rooted in Scripture.

When the Masses at Fusz outgrew the chapel, the composers were invited to sing at St. Francis Xavier College Church. As more people heard the music they were writing, it began to take on a life of its own. People requested copies to take to their parishes. The young men decided to record what they’d already composed and bind their handwritten songs into a book. In so doing, they bound themselves together.

“We didn’t have a vision that we were going to be a group,” Schutte said. “We wrote music for liturgies and at one point pooled our music together as three of us were getting ready to leave St. Louis. Our first publisher wanted to know what we wanted to be called. We couldn’t give them an answer, so they, on our first collection, put ‘music by St. Louis Jesuits.’”

That first collection, a four-album set called Neither Silver Nor Gold, included 57 pieces, and the description on the cover became their name.

Together the St. Louis Jesuits would go on to produce more than 150 liturgical songs and hymns. Their recordings garnered Grammy nominations throughout the 1970s, and their 1975 album, Earthen Vessels, continues to be one of the best-selling albums of Catholic music ever, with more than one million copies sold to date. Their songs have been translated into at least a dozen languages and have been performed in an Academy Award-nominated film (Dead Man Walking) and at the inauguration of one U.S. president and the funeral of another.

Where Are They Now? 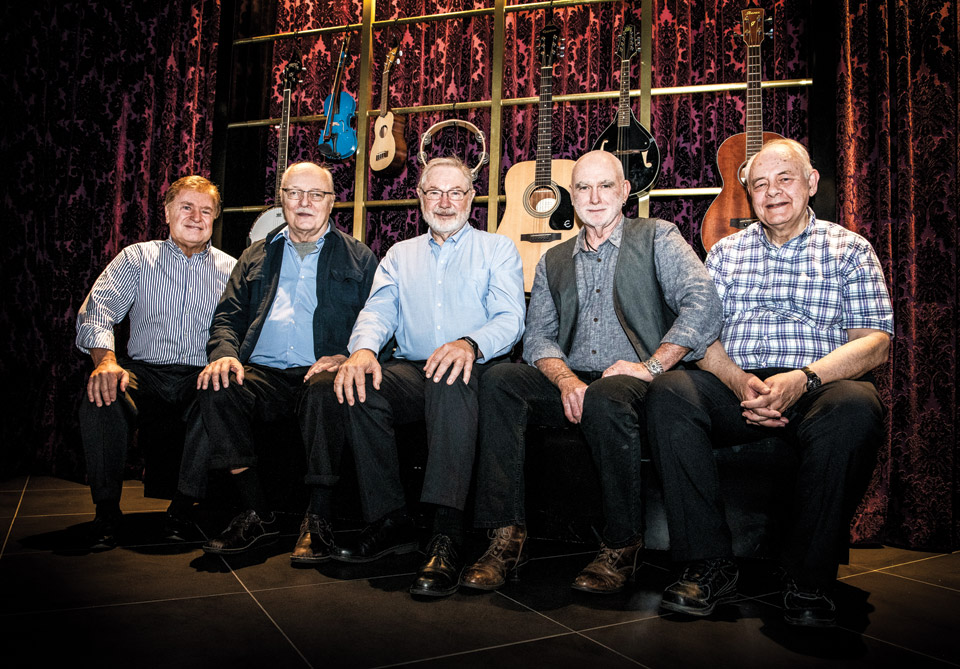 The group in 2019 (from left): Schutte, Foley, O'Connor, Manion and Dufford Photo by Steve Dolan

By the mid-1970s, four of the men had left SLU for other assignments. Today, Foley is the only one who lives in St. Louis, at Jesuit Hall. He is the editor of the Saint Louis University Sunday Website, a weekly review of Sunday’s liturgical readings from several dozen different perspectives.

Dufford lives and works out of the Creighton University Retreat Center in Griswold, Iowa, doing spiritual direction for clergy. During the last few years he has composed instrumental music based on the Spiritual Exercises of St. Ignatius.

After years as an associate pastor and liturgical musician in parishes across the country and 13 years of teaching at Creighton University, O’Connor was assigned by his provincial to full-time composing and writing. He lives in Milwaukee.

Manion, who was never ordained, lives in Seattle. He continues to perform and compose folk music.

Schutte left the Jesuit order in 1986 and made music his life’s work, as a composer and also as a liturgist and music director in various pastoral and academic settings. Today, he is composer-in-residence at the University of San Francisco, and he travels across the country, visiting parishes for performances, retreats and workshops.

The St. Louis Jesuits took a hiatus from collaborating in 1986. In 2005 they came together to record a new collection of music, Morning Light, an anniversary album celebrating 30 years. Since then, they’ve performed together at several benefit concerts. The 2019 Coming Home concert benefited the Ignatian Spirituality Project, which offers men and women who are homeless and in recovery from addiction the opportunity to change their lives through Ignatian spirituality and retreats.

Raise Your Voices, Lift Your Hearts

At Powell Hall, the St. Louis Jesuits walked onstage to a standing ovation, the first of many. Sonorous drums sounded, and the men began singing. Four of them played guitar. O’Connor, who wrote the opening song, “Lift Up Your Hearts,” practically danced as he strummed. After two numbers, he was the first to address the crowd.

With a prayerful and occasionally playful tone, the men took turns introducing and leading their respective songs. Sometimes the composer offered insight into the song’s origin or meaning, as Dufford did for “Be Not Afraid” — which, incidentally, was chosen as the No. 1 hymn of all time by readers of America magazine.

“This song isn’t telling us not to feel fear. Fear is a gift,” Dufford said. “The song is here to encourage us to face our fear, because of the One who goes with us.”

Before the show, the St. Louis Jesuits wanted to make clear that they didn’t see this concert as a performance, per se, but something more participatory.

“In the early days, we actually shied away from doing concerts,” Schutte said. “Whenever we were asked to do a public appearance, we fashioned the performance around prayer and scripture, and presented it in that way, as opposed to doing what people would now call a concert.”

“We were much more about serving the Mass and the people, rather than performers,” Foley said.

“As we finish our long careers, we’re thinking the important thing is the people’s spirituality,” he continued. “They’re taking this all to heart. One place we appeared, they said, ‘You’ve been the soundtrack to our spiritual lives.’ That’s what we’re trying to do here.”

To encourage the audience to participate in the Coming Home concert, the group made sure the printed program detailed each song, including musical notation and cues to join in.

In actuality, the audience didn’t just sing. They stood and swayed. They clapped along in rhythm and raised their arms. Some even shed a few tears. It felt like every person at Powell Hall had an emotional connection to these men and their music.

John Niemann (A&S ’71) came from Denver to share the concert experience with friends who listened to the St. Louis Jesuits as students at SLU.

“It was radical and almost sinful to have guitar at Mass,” Niemann said before the show. “They became a real changing force in the Church.”

“They adapted the music of their time,” said Denny Donnelly (A&S ’63, Law ’66), whose wedding had been officiated by the late beloved SLU philosophy professor John Kavanaugh, S.J., a founding member of the St. Louis Jesuits singing group before he devoted himself full time to philosophy.

“Like most kids in Catholic grade school and high school in St. Louis, I grew up with their music, singing it at Mass. Unlike most kids, I also grew up with that music in my house — occasionally live!” he said. “My ties to those men and their music are deep. I truly felt my uncle’s presence there with us, and it was beautiful to see these great composers and performers together on stage back in St. Louis.”

Emily (Sides) Schiltz (Grad A&S ’02) had no personal connection to the St. Louis Jesuits but was influenced by their music nonetheless. She was thrilled to attend Coming Home but also to share the stage with the group, as a member of the backing choir.

“Music connected me to the Church throughout my childhood, and it was, unbeknownst to me then, the songs of the St. Louis Jesuits that pulled me in and kept me close,” Schiltz said. “The concert was a surreal, beautiful afternoon of singing for praise and for gratitude — for those five men, and for the music they were inspired to write and share.”

Of course, the idea of gratitude came up again and again during Coming Home. Before starting “This Alone,” the first of five of his songs played at the concert, Manion spoke to the audience.

“I’m here, we’re — all of us — here for one reason only: to say thank you,” he said, his voice thick with emotion. “We’ll take some of it, but the St. Louis Jesuits isn’t us; it’s the phenomenon of these last 40 years. And you’ve been as much a part of it as we are. In the end, we just serve the music.”

The St. Louis Jesuits have written scores of songs, so they had a lot of material to consider for their Coming Home concert. They selected some “greatest hits” while striving for a balance in tempo, melody and songwriting credits.

“We had to watch it,” John Foley, S.J., said. “We cut verses out of songs because we didn’t want people to be there for three or four hours.”

Notwithstanding the thoughtful planning, the show ended up clocking in at just under three-and-a-half hours. Here are the tracks they chose, with the name of the composer for each in parentheses.