The first class of SLU’s third century is the largest and most diverse in the University’s history. 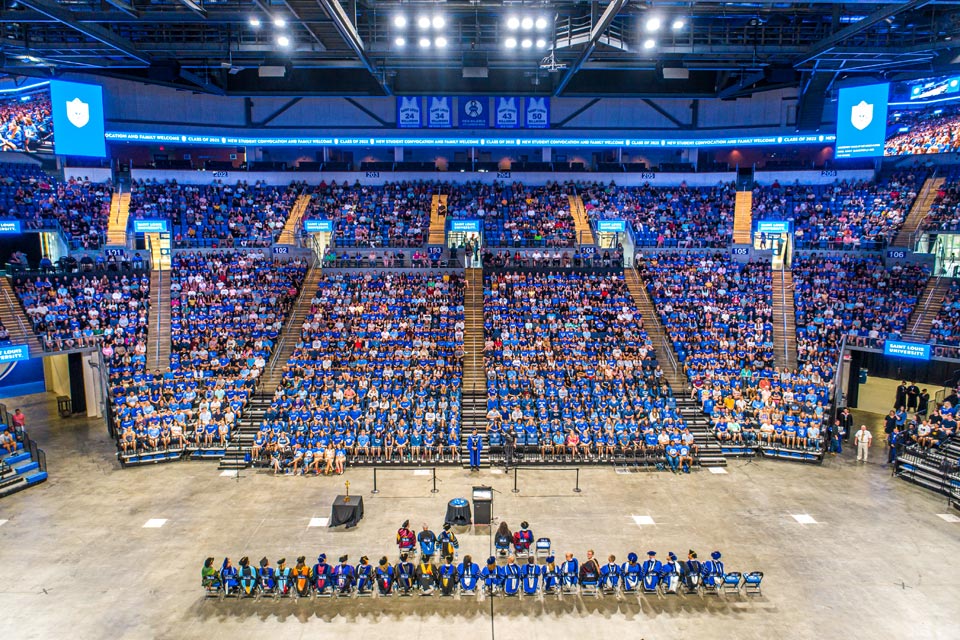 New students are seated in the lower bowl of Chaifetz Arena during convocation in August 2019. SLU President Dr. Fred Pestello is standing center on the floor. Photo by Justin Barr

An undeniable momentum is building.

The requests for campus tours were climbing. The number of high school seniors applying for admission was off the charts. The caliber of these prospective students was equally remarkable. Of the more than 15,500 who applied, more than 1,900 arrived on campus in August and became the largest freshman class in Saint Louis University’s history — a 25% increase over last year. This outpaces the national average of 2.4% annual student growth for four-year private institutions.

Not only is the Class of 2023 SLU’s largest, it is one of the highest achieving and most diverse. In fact, 14% of the class is made up of historically underrepresented students. And 204 members are first-generation students. Financial aid also hit a record high of $54 million.

“Increasing affordability and student diversity are two of the primary commitments I made when I began at SLU five years ago,” said Dr. Fred P. Pestello, SLU’s president, “and we continue to make progress in these areas.”

The University increased its marketing efforts and doubled down on its digital and social media presence. In response to growing student interest in globally minded programs, SLU’s outreach emphasized the University’s Madrid Campus and its more than 50 other study abroad programs. Additional resources allowed admission counselors to strengthen relationships with high school guidance counselors and prospective students.

Further, Davis said the University’s promise to increase both merit scholarships, as well as need-based grants and loans, allowed SLU to offer competitive financial aid packages. And SLU began presenting prospective students with their aid packages in January, well before most other universities and colleges.

“Our students were in their formative years in 2008 when the country was hit by the largest recession in many years,” Davis said. “It had an impact on them and on their parents. It created a price sensitivity. They want to know the value of the degree they’re working toward.”

And Davis believes the University’s most powerful recruitment tool is the affinity for SLU in the region and beyond.

“We stand for values that resonate with this generation,” she said. “Even if they’re not Catholic, even if they didn’t attend a Jesuit high school, they appreciate the holistic education and experiential learning SLU offers.

The larger class size has led to greater demand for student support services.

The University added more sections of SLU 101, its two-day freshman summer orientation program. Walsh Hall in the Griesedieck Complex was renovated last year and opened just in time to accommodate the housing needs of the larger class. The University added more residence life staff, including graduate hall coordinators and resident assistants, to help students create community and a sense of belonging.

To address national trends that show today’s college-age students are more likely than earlier generations to report being anxious, depressed and under stress, the University also added staff in the Student Health Center, including additional psychiatry clinics and a full-time dietitian to support students with special dietary guidance and disordered eating. The University’s counseling center also hired more therapists.

In addition, to foster the academic success of all students, the Office of Disability Services added another coordinator to support the larger number of students seeking accommodations based on learning, physical and mental health needs. The University also added staffing hours for tutoring, supplemental instruction, academic coaching and math labs.

Dr. Chet Gillis, SLU’s interim provost, said the University continually is assessing the needs of students to ensure they have the resources to reach their highest potential. And while it can be a challenge to accommodate such a large class, it also is an opportunity.

“Our responsibility for undergraduate residential education includes development of the whole person, not only academic accomplishment,” Gillis said. “I believe that the maturation of students requires time and personal attention from faculty, staff and administrators.

“We are happy to make that investment and know the benefits stay with students well beyond the college years.” 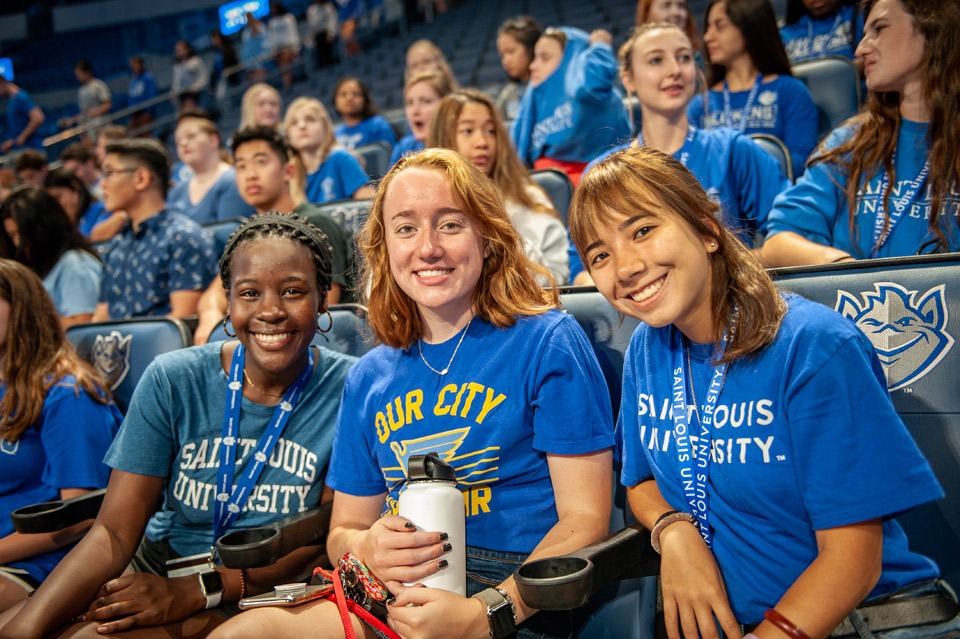 Welcoming students to campus is the first step. Helping them acclimate to college life is the next. SLU offers several first-year programs, many of which would not be possible without student leadership participation, to help students make the transition from high school to college, including:

Oriflamme: A group of student leaders from across campus who help new students move in and serve as mentors the first weeks on campus.

New Student Day of Service: A day when new students and their peer mentors engage in service projects across St. Louis as a means of introducing students to the University’s long-standing tradition of service.

Welcome Mass and Faith-based Retreats: These help new students make sense of their early moments of college life. The retreats include one called “A Fresh Look,” which is designed for new students.

Cross Cultural Center: The center’s programs and retreats promote multicultural
awareness and education for all students, and focus support on historically underrepresented
and marginalized student populations.

University 101: Small, interactive classes offered in the fall provide freshmen with ongoing information about campus resources and opportunities to reflect on the transition from high school to college. This year extra sessions were added to accommodate the influx of students. 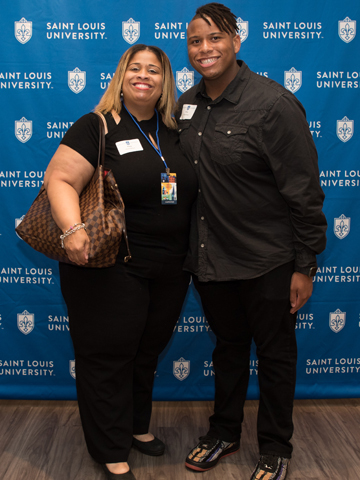 Aric Hamilton grew up surrounded by SLU memorabilia. His mother, Tina (Wallace) Hamilton (A&S ’94), took him to alumni events and to Billiken basketball games at Chaifetz Arena. She knew her son had the makings of a Billiken because early on he demonstrated a passion for advocating for the underserved, but she didn’t push.

Hamilton had several offers from colleges, and in the end, he chose SLU. He is one of the 382 members of the Class of 2023 who is a legacy student — a student with at least one relative who graduated from the University.

“Being a second-generation Billiken means walking not only in my mom’s footsteps but in the footsteps of other students of color who attended SLU,” said Hamilton, a Martin Luther King Scholarship recipient from Bridgeton, Missouri. “I love being part of SLU’s history as it becomes more diverse and works to ensure that this is the most inclusive campus possible. I take that very seriously.”

Hamilton said SLU always was near the top of his list because of the great experiences his mother shared about her time at the University and how well prepared she was for her career as an elementary school principal. Hamilton said his campus tour solidified his decision to enroll at SLU because he felt “at home.” Hamilton plans to major in education and minor in political science. Now, he is also helping recruit another generation of students as an ambassador in SLU's Project Billiken program.

His mother said she is “ecstatic” her son is a member of the Class of 2023.

“During Homecoming Weekend, I had the great honor of pinning Aric with the legacy pin at the Legacy Luncheon,” she said. “I was filled with emotions as I was so proud Aric made the decision to become a Billiken.”