Law professor Joel K. Goldstein is the No. 1 expert on the second-in-command. 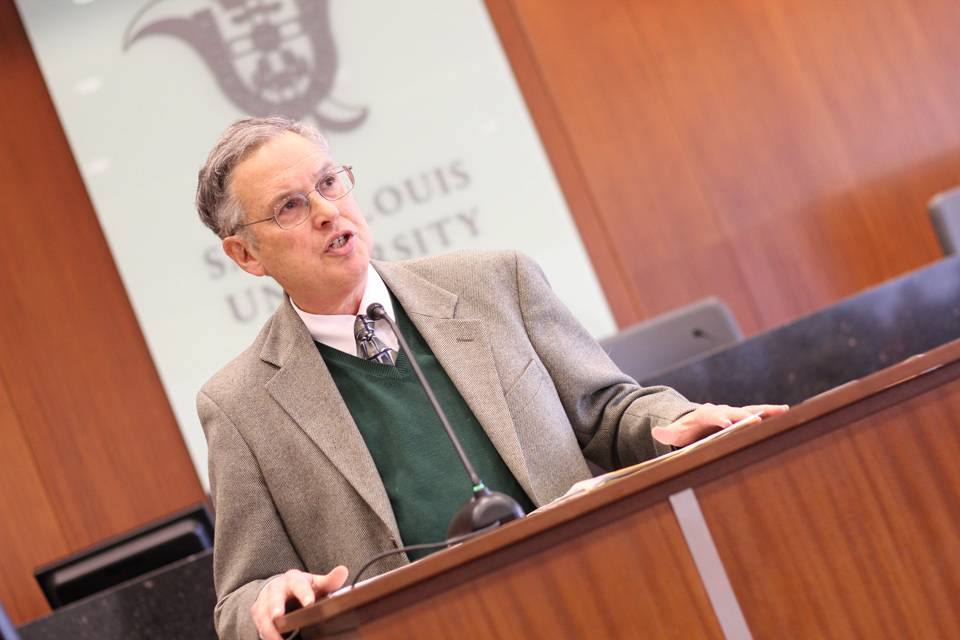 Professor Joel K. Goldstein is the nation’s foremost expert on the vice presidency. Yes, you read that right. With two books and countless articles on the office of the vice president of the United States, Goldstein has certainly earned the title.

Since the 1990s, every four years, and lately almost daily, Goldstein is a popular man. He has been profiled in The New York Times, had dinner with Vice President Joe Biden, appeared on national news and been quoted in at least four different languages.

“He’s definitely holding the record for the most quotes in the media probably by any professor,” said Roger L. Goldman, the Callis Family Professor of Law Emeritus and longtime colleague of Goldstein.

“He’s a triple threat,” Goldman said. “Scholar, great human being, legacy of his writings and books and articles. They’re going to make a lasting contribution to literature, not just here but nationally. He’s been building his national reputation. And for all the students that he’s taught, he’s a great role model. And part of his personality is his modesty.”

He changed the nature of the conversation about the vice president.”

William P. Johnson, dean of the School of Law

The story of how Goldstein found his niche is as unique as the expertise for which he is recognized. After growing up in University City, Missouri, he left home for Princeton University where he studied at the Woodrow Wilson School of Public and International Affairs. During his junior year, he happened upon the fateful constitutional amendment that would become the focus of his professional life.

“It really was an accident or series of accidents,” Goldstein said. “When I was in college, I needed to write a paper for a course in party politics. It was in October 1973. When I called home, my father said he’d been watching the Today Show and they’d had a discussion of the 25th Amendment because, with the resignation of Vice President Spiro T. Agnew, it was going to be the first time Congress had ever chosen a vice president.”

Less than a year before Richard M. Nixon’s resignation as president of the United States, Agnew pleaded no contest to a charge of federal income tax evasion in exchange for the dropping of political corruption charges. Agnew was fined $10,000, sentenced to three years’ probation and became the first U.S. vice president to resign in disgrace.

Under the process decreed by the 25th Amendment, Nixon filled the vacant office by nominating a candidate who had to be approved by both houses of Congress. He appointed U.S. Rep. Gerald Ford of Michigan, who would become the 38th U.S. president following Nixon’s resignation.

Amid the drama, a young Goldstein honed his research skills. That first paper on the vice presidency later became his dissertation when he was a Rhodes Scholar at Oxford University in 1978. And that dissertation eventually became his first book on the office.

After receiving his doctorate in political science, Goldstein followed in his father’s footsteps to become a lawyer. He attended Harvard Law School, where he served as a note editor of the Harvard Law Review.

“My father loved the law and the practice of law,” Goldstein said. “He and Elmer Price formed Goldstein and Price in 1957, and it became a leading maritime firm in St. Louis. I grew up thinking I wanted to be a lawyer and wanted to practice with my father, which I did for 12 years before joining SLU’s faculty in 1994.”

After law school, and prior to joining the firm, Goldstein served as a law clerk for Judge W. Arthur Garrity Jr. of the Federal District Court in Massachusetts, who was notable for issuing the 1974 order in Morgan v. Hennigan that mandated that Boston schools be desegregated by means of busing.

In 1982 Goldstein completed his first book, The Modern American Vice Presidency: The Transformation of a Political Institution — one of the first books to focus on the office of the vice president and how it changed over time.

In 1994, just as Vice President Al Gore was gearing up for a historic midterm election, Goldstein was facing a challenge of his own — the classroom. He joined the faculty at Saint Louis University School of Law, where he put his expertise on the constitution and the vice presidency to practice.

“The idea of teaching was something I thought of before I went into law practice, but practicing law with my father was also something I wanted to do,” Goldstein said. “I was fortunate that I got to do both. I enjoyed the teaching I did at Oxford and at Harvard during law school in a course on the presidency taught by the great Richard Neustadt. When I moved back to St. Louis, I was contacted by Princeton about a position in its politics department, but the timing was wrong for me.”

For the past 25 years, Goldstein has tackled the challenging subject of the U.S. Constitution with an ease that left a strong impression on countless students.

“I didn’t know anything about Professor Goldstein before I took his class,” Paul L. Brusati (Law ’15) said. “I looked him up, and you see his credentials ... and they are incredibly intimidating. To top it all off, he is teaching you ‘Constitutional Law,’ one of the toughest classes you can take. Then you walk in and immediately, every one of my fears about how it would go was put to rest.

“He was probably the most influential professor or teacher I’ve had,” Brusati continued. “He is just the kindest and clearly a genius. I don’t think he would like my saying that, but I think that’s just his humble nature.”

And it wasn’t only Goldstein’s humble nature that left a lasting impression, but the way he taught students how to read and interpret the law.

“He not only taught us constitutional law, but how to read judicial opinions and how to extrapolate from those opinions how judges think about legal issues,” Rachel Berland (Law ’13) said. “Now when I write briefs or when I go and argue, I think about not just the legal issues but how to contextualize those issues for the judge. And I think that’s because of the way Professor Goldstein approached constitutional law.”

In addition to being a professor, Goldstein was associate dean of faculty from 2001-04 and was awarded the Vincent C. Immel Professorship in 2005. This was especially meaningful to those who knew Immel, the late, revered School of Law professor.

“Vince Immel was the paragon of principle of this institution,” said Michael Wolff, dean emeritus and professor emeritus of the School of Law. “Joel fit right into that mold of being an excellent teacher and really principled colleague and a terrific colleague from that standpoint. It was also nice that he was a nationally known scholar.”

As a professor, Goldstein was able to dedicate time to his scholarship on the office of the vice president. During his tenure he has written countless law journal articles and op-eds, and in 2016 completed his second book on the office: The White House Vice Presidency: The Path to Significance, Mondale to Biden.

“He changed the nature of the conversation about the vice president,” said William P. Johnson, dean of the School of Law. “He brings a historical, keen legal mind and deep understanding of the role.”

“Vice-presidential scholars form a tiny club,” wrote Mark Leibovich in a 2012 New York Times profile of Goldstein. “And Joel K. Goldstein is their George Washington — or, better yet, their (Vice President) John Adams.”

Goldstein is widely respected not only in academia but also among vice presidents themselves. He maintains a relationship with Walter Mondale, appeared on a panel with Gerald Ford, spoke with Dan Quayle and dined with Joe Biden.

“In 2009, right after he became vice president, I got a call from [Biden’s] office to set up a meeting of some VP scholars to meet with him and just talk about the vice presidency,” Goldstein said. “We met at the Naval Observatory, the vice president’s official residence, and had dinner.”

And although Goldstein has rubbed elbows with men who were one heartbeat away from the presidency, what has left the biggest impression on others is not his expertise necessarily but his compassion and intellect.

“A key lesson I learned from Professor Goldstein is to take criticism in stride, calmly and professionally, trusting one’s own abilities while making adjustments based upon others’ input judiciously,” Bridget Hoy (Law ’01) said. “When he served as the adviser to the law journal, he encouraged the board’s decisions, even during contentious times, and was never flustered. His calm, professional and decent demeanor was an excellent example I have thought about — and tried to follow — my entire career.”

Goldstein retired from the full-time faculty in July 2019. He plans to return to the School of Law to teach “Constitutional Law” on occasion and will continue to share his expertise about U.S. vice presidents.

The vice presidency, the office John Adams called “the most insignificant office that ever the invention of man contrived or his imagination conceived,” has become very, very significant. But it’s had highs and lows. Here are a few in chronological order.