Dana J. Boente (CSB ’76, Grad CSB ’77, Law ’82), former general counsel for the FBI, is a veteran prosecutor who has dedicated his career to public service. 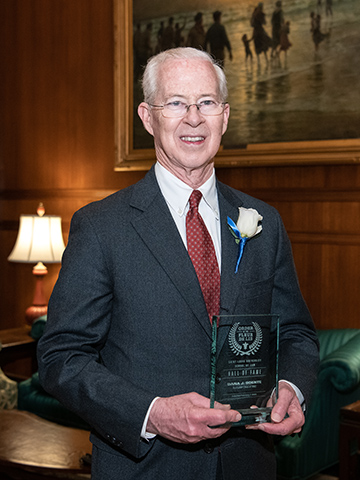 Most SLU alumni would be surprised to learn that, until recently, a “triple Billiken” worked among the highest echelons of American government. Nor would they suspect upon meeting Boente that this pleasant, unassuming Midwesterner was a key figure in the Mueller investigation, the sentencings of former Virginia Gov. Robert McDonnell and the conviction of former U.S. Rep. William J. Jefferson.

Boente is a veteran prosecutor who has dedicated his career to public service and works to uphold the rule of law no matter how important the players.

In 2018, he was appointed general counsel for the FBI after serving 35 years in the Department of Justice (DOJ). He retired in the summer of 2020.

“It reemphasized to me the dedication and patriotism that the FBI agents have to the job,” he said. “They put their lives on the line every day when they go out and they do their best to dothe right thing. Everyone makes mistakes, and sometimes FBI agents make mistakes and they do their best to fix and not repeat them, but I think that they’re a dedicated group of patriotic men and women, and I was proud to work with them.”

After graduating from SLU in 1982, Boente clerked for Chief U.S. District Judge J. Waldo Ackerman for the Central District of Illinois — which he recommends for any law student wanting to pursue government service.

“Being a law clerk was a terrific experience, a great way to start and learn about litigation without the pressure of actually being the person up at the podium,” he said.

From there, Boente planned to become a trial attorney and expected to land at a large firm doing commercial litigation. Life took a different turn, however, when he was accepted into a prestigious, entry-level program with the DOJ in 1984.

“No regrets,” he said. “I wouldn’t have traded my career for any amount of money.”

He was appointed by President Donald Trump as acting U.S. attorney general on Jan. 30, 2017, and later became acting deputy U.S. attorney general from Feb. 9 to April 26, 2017. He also served concurrently as the acting head of the DOJ’s National Security Division. He retired from the department at the end of 2017 and joined the FBI in January 2018.

Boente said his eight years at SLU were “one of the better times in my life,” noting the uniqueness of the undergraduate experience and the influence of legendary law professor Vincent C. Immel.

“Everybody in my generation talks about Vince Immel. For most of us he defined the law school,” Boente said. “There are a lot of smart people in this world, but there are not a lot of really, really great teachers, and he was.”

Not only did Boente gain a solid understanding of the legal system, but his SLU education helped inform his worldview.

“The Jesuits emphasize service,” he said. “We can think of public service, but it can also be service to family, service to your church. They always emphasized service.”

Being nominated by the president and confirmed by the Senate to serve is “certainly not the kind of thing you ever think is going to happen,” he said. “It was a terrific honor. I have always felt in each of my jobs as a public servant that it’s been a privilege, and the privilege has been all mine.”