Grandmaster Dorsa Derakhshani has made a name for herself around the world, but she’s happy to call Saint Louis University home. 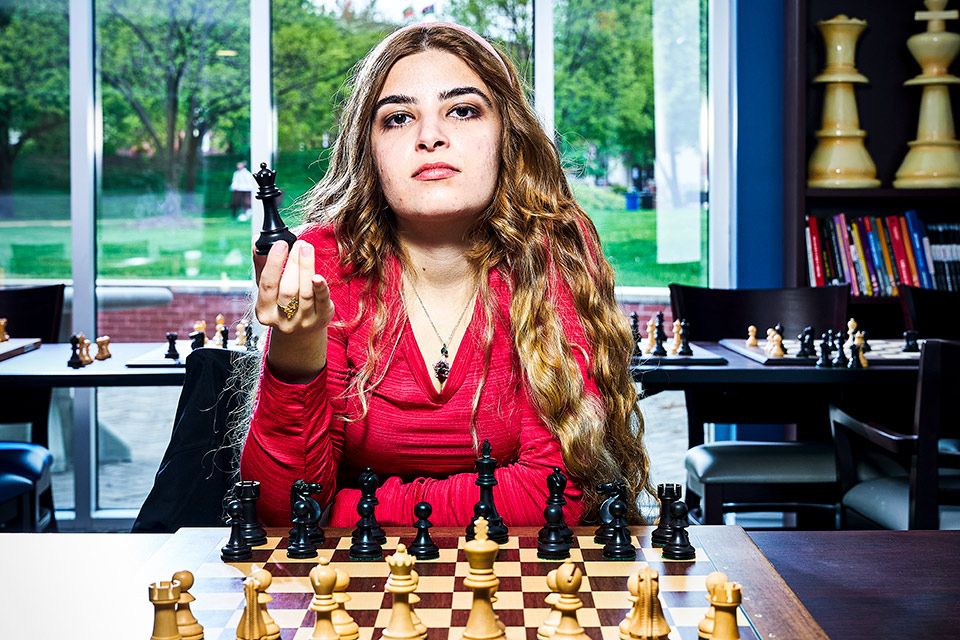 At 8 years old, Dorsa Derakhshani won one of the first chess tournaments she ever played, a national championship in her native Iran. She accepted her award in a princess gown and tiara, sweetly standing out among the other girls wearing traditional headscarves.

It wasn’t the first time Derakhshani stood out, and it wouldn’t be the last.

Like the queen in t he ga me of chess, Derakhshani knows what it is to be the lone female in the crowd. But also like the queen — generally considered the most powerful piece on the board — she draws on her ability to move exactly as she wants in any direction.

Derakhshani grew up in Tehran, the firstborn of a pediatrician father and psychiatrist mother.

Her mother didn’t have many professional opportunities as a woman in Iran in the late 1990s, so she “decided to stay home and work on me instead,” Derakhshani said. That meant undivided attention and instruction from the very beginning. It soon became clear that the child reached milestones before anyone else around her.

At 2.5 years, she finished the equivalent of first grade. At age 4, fourth grade.

It was extraordinary, but when it came time for the little girl to begin her formal education, it posed a problem: There was no real precedent for the situation in her country. Eventually, Derakhshani started school in a first-grade classroom, even though she was academically years past her classmates.

Her parents realized their daughter needed more. They sought enrichment for her at every turn: ballet, swimming, painting, music and, of course, chess. She had been around the game for as long as she can remember.

“My father played chess in high school before the revolution in Iran,” Derakhshani said. “But after the revolution, it was banned for a while. He couldn’t play in public, but he would play in the house with my mom. That’s how I learned.” 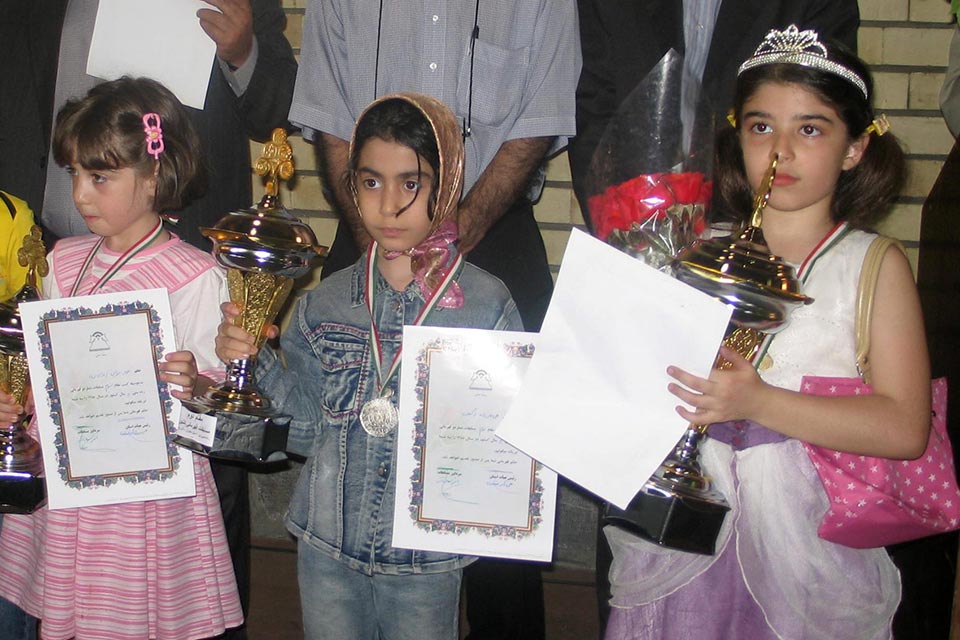 Derakhshani (right) after one of her first chess tournaments, a national championship in Iran; submitted photo

By 6, she started chess lessons, but the hobby quickly turned into something more, as Derakhshani’s competitive nature kicked in. Unlike some of her other pursuits, chess produced obvious winners.

“I always wanted to be the best at everything. Chess had the clear category of what I was best at, and I really liked that,” she said.

She started winning and went on to score straight gold medals at the 2012, 2013 and 2014 Asian Youth Championships. In the numerical chess ratings, she was at the top for all girls in Asia and second-highest for girls under 18 in the world, 2015 through 2017.

Soon, Derakhshani had achieved every possible women’s chess title, including grandmaster in 2016. But it wasn’t without struggle. The restrictive culture of her home country hindered her, again and again.

“In Iran, women are seen as second-class citizens, so they weren’t allowed to play in open tournaments. And there weren’t enough women chess players to organize a big event,” she said.

Even when she could play, Derakhshani found herself at odds with the Iranian Chess Federation. Many of the issues stemmed from the official Iranian dress code. She’d been told her jeans were too tight, her clothes too revealing and that she needed to cover her hair in public.

“I never planned to stay in Iran and have that type of life,” she said. “The culture wasn’t for me — such strict gender roles and the whole idea that I couldn’t speak up for anything, ever. It was oppressive.”

The last time she officially played for Iran was in 2015. At that point, she’d already started talking with universities outside of Iran, looking for one with both a chess program and an academic program she liked. But first she wanted to spend a year focusing on chess.

She played for different European leagues, talking with chess federations and countries across the continent, trying to find a fast path to residency. She settled on Spain, moving by herself to Barcelona and staying for about a year.

As she was deciding whether to switch her chess federation to Spain, her home country took a drastic measure: They barred her from playing in Iran for not wearing a hijab (a headscarf worn by some Muslim women) at a recent competition. It was a moot point, since she’d already left the Iranian national team, but it gave her a sense of resolve in her decision: She needed to go where she had more freedom in her choices.

For the girl whose name means “like pearl” in Persian, it seemed the world was her oyster.

She’d been offered scholarships from a couple of American universities, but Saint Louis University’s academics won her over — especially SLU’s reputation for health sciences studies. Plus, St. Louis’ reputation as a chess hub helped convince her to immigrate here and play for the U.S. Chess Federation.

“SLU was a great fit for me. The biology program was better, the pre-med track was better, the chess team was more developed than at other schools I considered,” she said. “I also knew the coach.”

The coach, Alejandro Ramirez, said he’s “known Dorsa forever.” He had played chess professionally, and the two had friends in common. When the University brought him on to develop its chess team, he thought of her. She became the first woman on a scholarship for SLU’s chess team, moving to St. Louis in the summer of 2017 and starting classes that fall.

At SLU, Derakhshani continued to evolve as a chess player and revel in her freedoms. After getting international attention for her refusal to wear a hijab, she penned an op-ed for The New York Times and gave a TedxTalk about the societal pressures and expectations she faced as a woman both in everyday life and in the chess world.

Then last fall, the Netflix hit The Queen’s Gambit — about a girl who’s a chess prodigy — brought chess to popular consciousness. Suddenly everyone from People Magazine to The Telegraph wanted to talk with Derakhshani.

“Dorsa always has a lot to say and a lot to offer,” Ramirez said. “She’s a strong player and a competitive teammate. She makes SLU look good.” 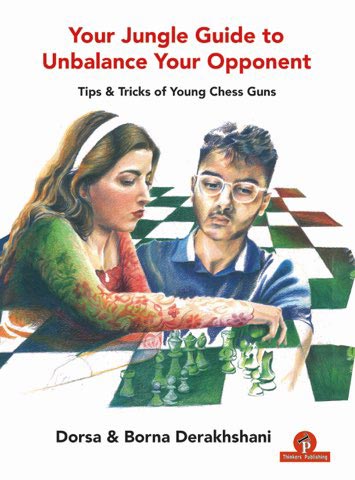 Derakhshani and her brother, Borna, recently collaborated on Your Jungle Guide to Unbalance Your Opponent: Tips and Tricks of Young Chess Guns, which will publish this summer. The book is for chess players of any level who want to think more critically about the game.

Last fall, she gave the University reason to be proud by taking third place in the 2020 U.S. Women’s Chess Championship. Entering as the 12-seed, Derakhshani’s top-three finish was the surprise of the event. The event was hosted by the Saint Louis Chess Club in late October; however, due to COVID-19 restrictions, the championship was held online for the first time.

“I really miss playing overthe-board chess,” Derakhshani said. “Online chess is fun, but I want to be able to interact with a real person, not a computer.”

Fortunately, her commitment to the sport will outlast the limitations dictated by the pandemic. Derakhshani intends to become a surgeon and wants to continue playing chess when she attends medical school. She has a green card and is on a path toward U.S. citizenship. She would love to stay in St. Louis after she finishes her bachelor’s degree in health sciences and biology in 2022.

“I’m pretty settled here,” she said. “My family is still in Iran, and I don’t want to move again on my own. I would like to actually be able to hold that stability for longer.”

After making her own way all over the globe, even the queen can stay put for a turn.

Since its founding in 2016, SLU’s chess team has become nationally known, and it is considered one of the most competitive collegiate chess teams in the country.

The championship attracted more than 1,300 students representing more than 200 universities from 84 countries. Due to COVID-19, the event was played virtually.

SLU then placed second in the Final Four of Collegiate Chess (the U.S. national championships), finishing only half a point behind University of Texas at Rio Grande Valley.

Established as a partnership between Saint Louis University and the Chess Club and Scholastic Center of St. Louis, with support from University trustee and chess enthusiast Rex Sinquefield (CSB ’67), the team is not just a club activity but rather a strategic effort by administrators and alumni to recruit promising players and build on SLU’s academic reputation.