SLU’s own infectious disease specialist has been keeping campus safe during the COVID-19 pandemic. 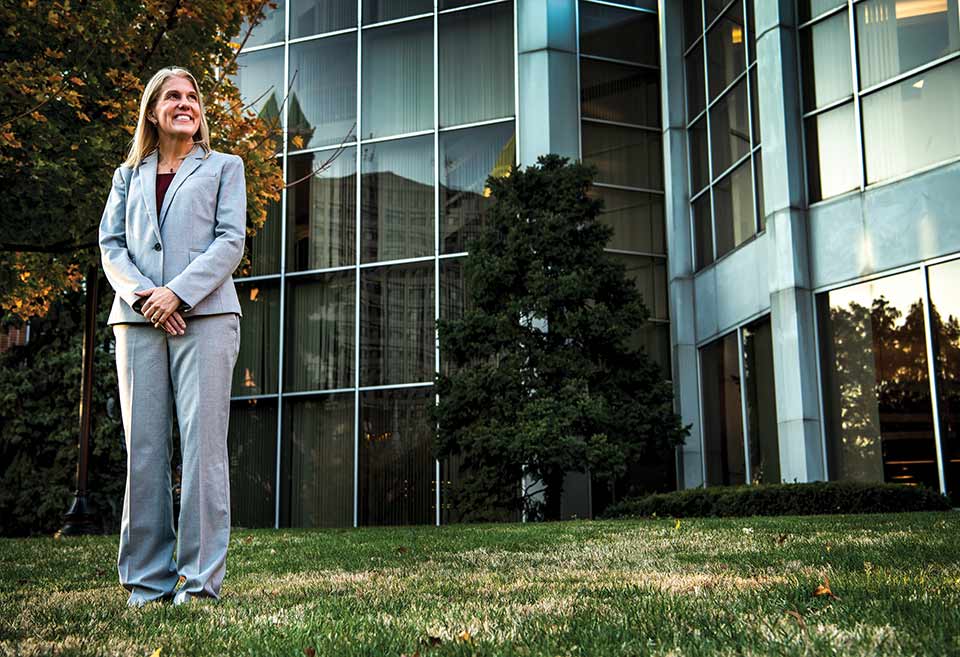 If Dr. Terri Rebmann (Grad VSN ’06) had paid closer attention to her internship application, she likely would have been a labor and delivery nurse. Instead, she became an expert in infectious diseases and is advising Saint Louis University’s president on how to keep SLU safe during a pandemic.

Rebmann was in nursing school at Truman State University when she applied for an internship with the Commissioned Core of the U.S. Public Health Service. A friend told Rebmann about her internship experience delivering babies on a Native American reservation. That sounded ideal to Rebmann. She completed her application, glanced at a map and chose what she thought was a reservation near Springfield, Missouri. Instead, she unintentionally volunteered to work at an all-male maximum-security prison hospital.

“It was about as far away as you could get from labor and delivery,” she said.

Rebmann was assigned to a unit that provided care for patients with HIV/AIDS, tuberculosis and sexually transmitted infections. She became engrossed with studying infectious disease transmission and passionate about caring for the often-stigmatized patients who contracted HIV/AIDS.

After her internship, Rebmann earned her master’s degree in nursing and became a clinical nurse specialist. She hoped to care for patients with HIV, but jobs were difficult to find. As a fallback, Rebmann accepted a position at Barnes-Jewish Hospital in St. Louis as an infection preventionist, protecting hospitalized patients and health care providers from infection. The field quickly became a calling for Rebmann, who earned certification in infection prevention and control. The hours, however, were tough on her family.

“It seemed that outbreaks only happened on major holidays or at 5 p.m. on Fridays,” she said. “My kids were young at the time, and I was on call quite a bit. I needed to find a job with more traditional hours.”

In 2000, Saint Louis University received a grant from the Centers for Disease Control and Prevention to develop one of the original Centers for Public Health Preparedness. Researchers in the center, which eventually became the Saint Louis University Institute for Biosecurity, studied bioterrorism preparedness and invited Rebmann to join the team. The grant was anticipated to last two to three years.

“At the time, I thought bioterrorism was a little implausible, but a year into the grant, 9/11 happened and then a week later, the anthrax attacks occurred,” she said. “That was another turning point in my career.”

Letters containing anthrax spores were mailed to several media offices and two U.S. senators, killing five people and wounding 17 others. It was one of the worst biological attacks in the country’s history.

“It was an incredible challenge responding to a bioterrorism attack at a time when there were so few experts in the field,” Rebmann recalled. “It definitely brought attention to the need to be prepared for these types of events.”

The short-term grant evolved into a long-term commitment for Rebmann.

She earned her doctorate in nursing at SLU and joined the faculty. A professor of epidemiology in the SLU College for Public Health and Social Justice, Rebmann teaches courses on infection prevention, disaster planning for infectious disease disasters, epidemiology of infectious diseases and the challenges of international bioterrorism.

She is a fellow in the Association for Professionals in Infection Control and Epidemiology (APIC) and former chair of the APIC Emergency Preparedness Committee. She has served on national and international task forces focused on reducing infection rates, preparing staff to care for patients during emerging infectious disease outbreaks and advocating for health care worker safety.

Her research interests include improving the country’s ability to dispense medical countermeasures during an infectious disease disaster, safe long-term use of respiratory protection, barriers to vaccine uptake, and reunifying children and families during disasters.

Rebmann now directs SLU’s biosecurity institute and is dedicating herself to preparing leaders in biosecurity and disaster preparedness. She has been ascending as a national leader in using evidence-based research to educate health professionals on mitigating the spread of infectious diseases in health care settings and the population at large.

“The institute functions at the cross-section between all my areas of interest: infectious diseases, infection prevention and disaster preparedness,” Rebmann said. “We’re constantly learning about new diseases and threats.”

Rebmann also assisted in SLU’s development of the Master of Public Health with a concentration in biosecurity and disaster preparedness, the only program of its kind in the country.

Though bioterrorism preparedness was at the center of the institute’s original mission, Rebmann said researchers quickly learned that emerging pathogens and pandemics are more viable threats to populations than human-made biological disasters because they happen on a more regular basis.

Rebmann, her colleagues and public health students have helped address emergency readiness for various outbreaks, including SARS Co-V (2002-2003); MERS Co-V (2012); the H1N1 influenza pandemic (2009); and the emergence of Zika and the Ebola crisis (2014-2016), to name just a few emerging infectious disease events.

COVID-19 is proving to be more vexing.

“A large part of responding to an outbreak is identifying people who are infected, so they can be isolated and treated quickly,” she said. “With COVID-19, a large percentage of infected individuals do not show symptoms, even though they are shedding the disease and can infect others. That makes disease control much more challenging.”

When COVID-19 hit last March, Rebmann was asked to review the University’s measures aimed at keeping students safe on campus and abroad. When should campus close? What procedures should be followed to safely move students out of their on-campus residences? When should study abroad students return home? What events could and should be moved online or canceled altogether?

“Terri Rebmann provided a voice of reason while we were planning for the fall semester,” said Michael Lucido (A&S ’98), SLU’s vice president for facilities management. “She is educated in the science but also understands the practicality of it all. Terri combines the practical and the academic, and has led us to great success.”

Rebmann has become a key resource for the University’s COVID-19 task force and a special advisor to SLU’s president — so much so, she needed to shelve her academic duties temporarily to focus on keeping campus safe.

And her outreach goes beyond campus, too. At the height of the shortage of personal protective equipment (PPE), she donated her personal stockpile of masks and respirators to friends, colleagues and SSM Health. Through APIC and the American Nurses Association, Rebmann hosted a webinar with nurses across the United States to discuss what to do when they deplete PPE supplies and how they can prevent bringing the infection home to their families. More than 150,000 individuals registered for the webinar.

Rebmann said the most challenging aspect of her work is allowing students to have a normal-as-possible college experience while following public health safeguards to prevent disease transmission. Her mission is personal. Her daughter is a senior at SLU.

“These are young adults who are very social,” Rebmann said. “They want to spend time together. They are forming tight bonds with friends, establishing new romantic relationships, and it is difficult for them to be vigilant about wearing masks and staying six feet apart. It’s easy for our team to come up with policies that would limit disease spread, but you need to find ways to implement policies students are going to be able and willing to follow.”

Rebmann also said the University’s policy of communication and transparency regarding COVID-19 protocols goes a long way toward fostering cooperation with safety measures. In addition, she noted SLU has a strong internal contact tracing team that can respond to positive cases in less than 24 hours.

“Overall, we had a very successful fall semester,” Rebmann said. “We saw an increase in cases tied to Halloween parties and social gatherings, but that was very short term. Our infection and positivity rates on campus stayed extremely low all semester — much lower than what we saw in St. Louis city or county, as well as the state and across the United States. We clearly did something right.”

Rebmann said she is hopeful campus will remain as safe and successful as it has been.