A Beautiful Day in the Neighborhood

The area around Saint Louis University is transforming. Where vacant industrial plots and boarded-up buildings used to be, recreation spots, restaurants and other amenities now welcome the community. All four of these projects are located within the 400-acre redevelopment area guided by the St. Louis Midtown Redevelopment Corp. (SLMRC), a joint effort of SLU and SSM Health. 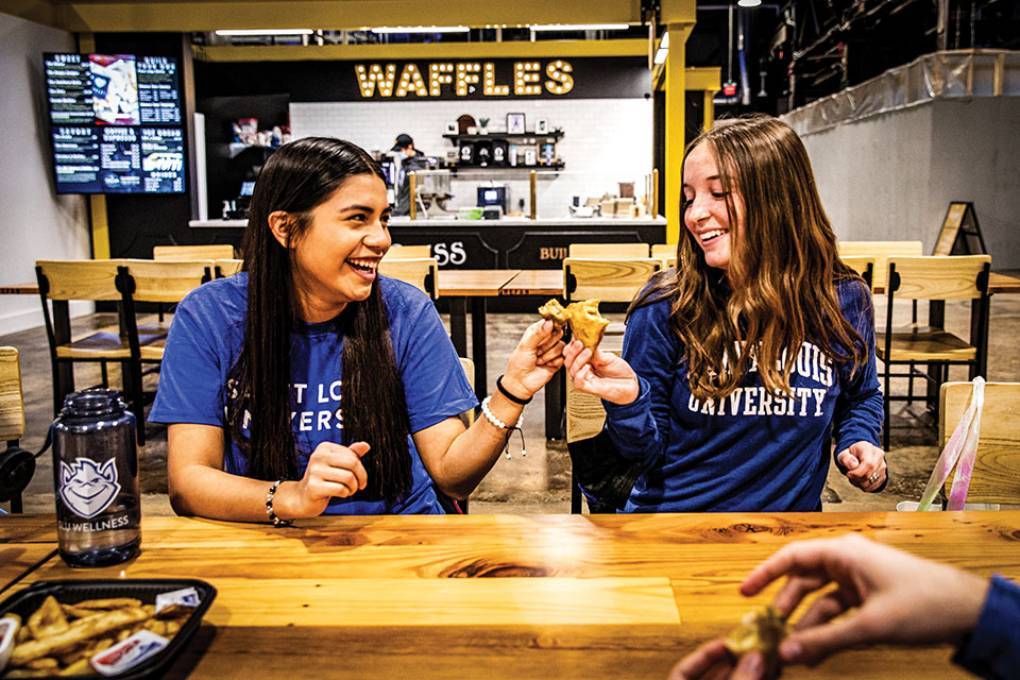 The long-awaited Food Hall at City Foundry STL opened in August and offers something for every meal and virtually every palate. The developers wanted to make a space for chefs around the region to try out their newest and biggest ideas. The result is an eclectic food court concept, with flavors from Argentina to the Ivory Coast. There are kitchens for 20 food vendors; 17 are up and running. At the center of the space is The Kitchen Bar. The formerly industrial space offers lots of indoor seating, plus tables outdoors along Foundry Way.

Adjoining the food hall will be 18 Rails, an event space that will accommodate up to 700 guests. It’s located near where 18 rail lines once converged. Construction started on this part of the project in the fall.

A 10-screen Alamo Drafthouse movie theater is also under construction as part of the Foundry complex. Other plans include Puttshack, which will offer upscale mini golf, plus food and drink. Phase two of the project, which got underway in early 2022, will include apartments and additional office and commercial space.

On the northeast corner of the City Foundry STL site is the new Fresh Thyme Market, which opened in November. 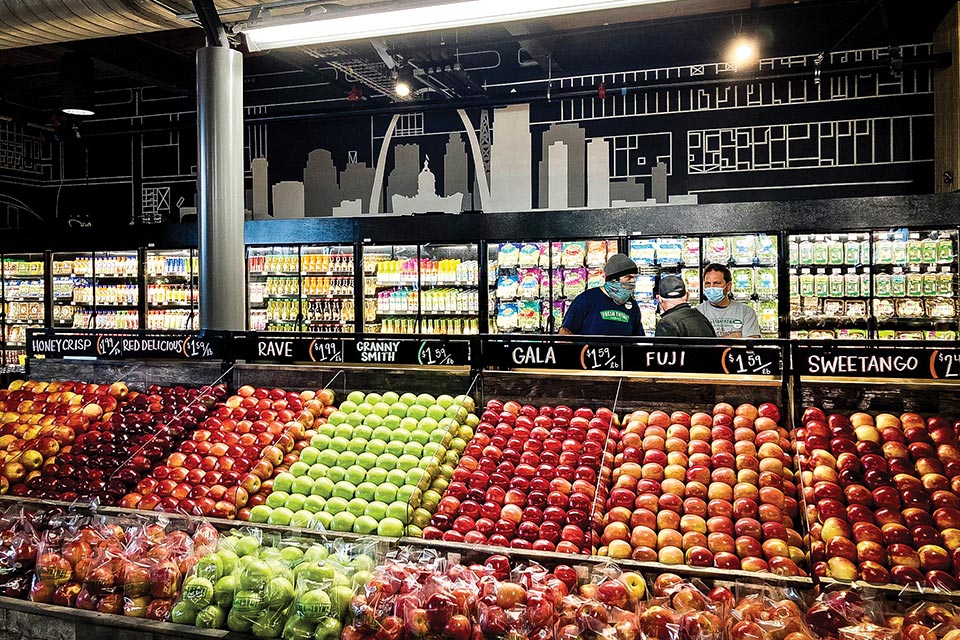 Some of the 100 St. Louis-area companies whose products are sold at the new Fresh Thyme are: Eddie’s Donuts, Bridge Bread Bakery, Patty’s Cheesecakes, Priority Pastries and Field to Fire.

“Bringing a popular fresh foods grocer that prides itself in showcasing local produce and local food and other goods has been a priority of the University’s St. Louis Midtown Redevelopment Corporation,” University President Dr. Fred P. Pestello said. “This very intentional development effort is another way we are working with the people of St. Louis to reimagine, transform and unify our city.”

While City Foundry STL is just a short walk from campus, it’s easy to drive and park there, too. The SLU Shuttle added Fresh Thyme to its routes, and a three-level parking garage offers free parking for the grocery store and the rest of the Foundry complex. There’s also round-the-clock security patrolling and video monitoring, plus emergency call boxes.

The new Target will anchor a $60 million mixed-use development called The Edwin, which will include 199 luxury apartments. 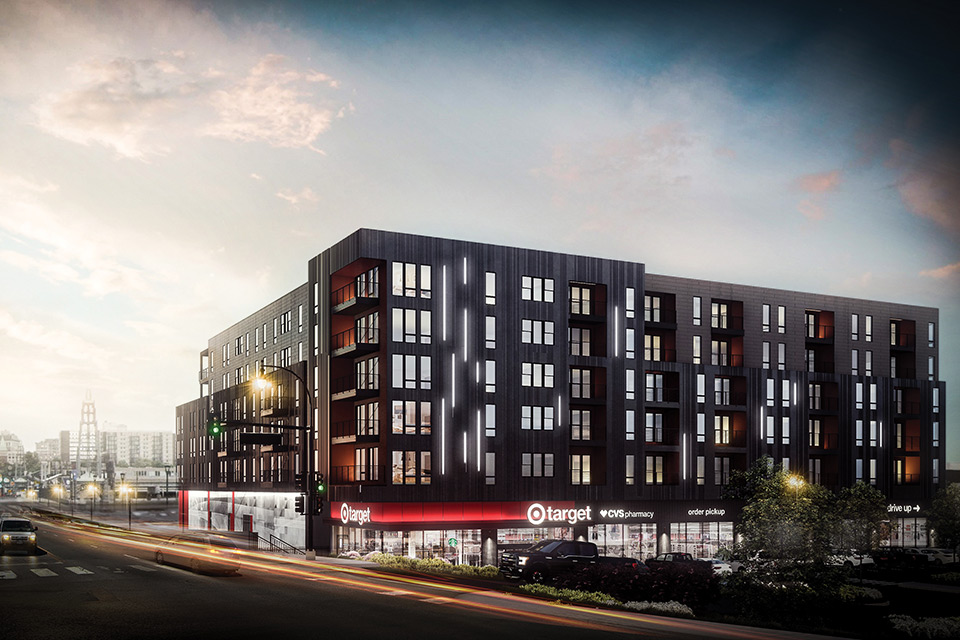 A rendering of the Target store at The Edwin along Grand Boulevard.

“When we decided to become the area’s master redeveloper, this project is exactly the type of transformational effort that we envisioned,” said David Heimburger, SLU’s chief financial officer and president of the St. Louis Midtown Redevelopment Corp. board of directors. “Attracting a stellar brand like Target to Midtown has long been a dream of ours and is further proof that this is a place where people want to be. We’re eager to continue working with our neighbors and community partners to keep this momentum going and to plan for the next big leap forward in the revitalization of the area.”

This new Target will fill a void of anchor retail along the Grand corridor — and put a “Target run” within walking distance for SLU students and area residents. The new store is also projected to bring 200-plus jobs to the neighborhood.

“We are excited for our 19th Ward community and the City of St. Louis to have additional retail, jobs and services,” said 19th Ward Alderwoman Marlene Davis. The Edwin development is the latest phase of PPG’s Steelcote Square District, a more than $100 million investment in the area that also includes the Steelcote Lofts, Steelcote Crossing and Steelcote Flats.

St. Louis-based design firm Arcturis and general contractor Holland Construction have been tapped for the project. The Target store is slated to open in summer 2023.

For almost four decades, the restaurant and tavern at the corner of Spring and Laclede was the close-to-campus destination. Meeting friends for drinks? Humphrey’s. Grabbing a greasy-good bite to eat? Humphrey’s. Continuing the fun after a fraternity formal? Humphrey’s.

The establishment — named after owner Robert “Humphrey” Mangelsdorf and operated for years by his widow, Jan — opened in June 1976. It closed Jan. 1, 2017, and has been vacant since then. There was talk a few years ago of the building being demolished, but nothing of consequence happened. Until now. 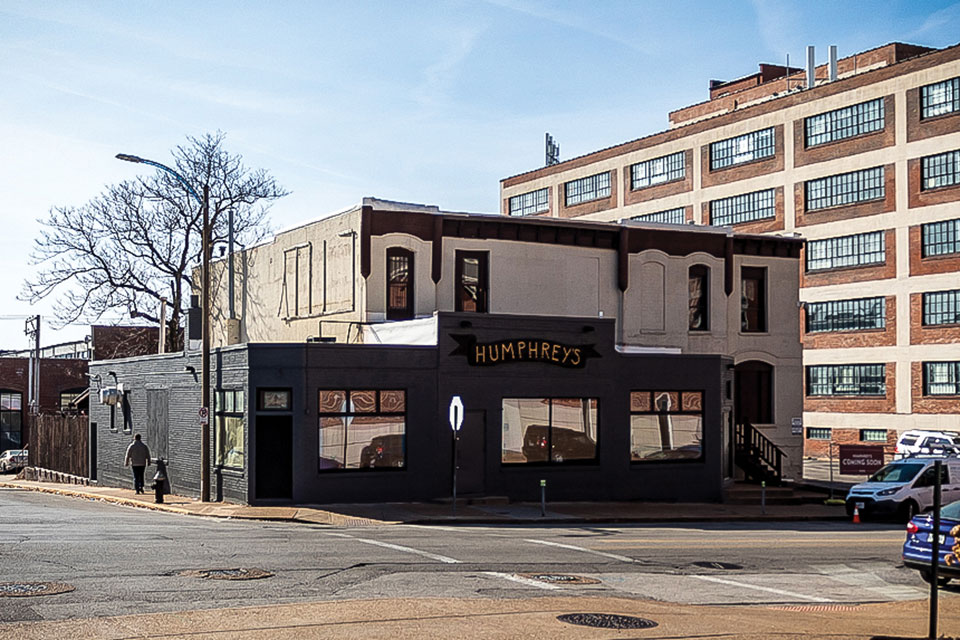 The refreshed exterior of Humphrey’s. Photo by Chris Brault

“There’s no sure thing in the bar and restaurant business, but Humphrey’s is as close as it gets,” Sarah Sanders said.

Sanders and her business partner, John Harris, started leasing the building in June 2021. They plan to reopen for business this spring.

A self-described “Humphrey’s frequenter” in her 20s, Sanders knows how fondly people still think of the place.

“Everyone has their Humphrey’s story,” she said. “We want to honor everything it had to offer.”

That includes keeping the layout intact — with a few crucial updates, such as new bathrooms and the addition of a lift. She’s working with Jan Mangelsdorf to recreate some of the restaurant’s favorite recipes. And the plastic Humphrey’s cups every SLU student had in their college apartments? They’ll be back.

Sanders did hedge on whether every single Hump’s tradition would return.

“I can’t promise penny pitchers will be exactly the same,” she said. “Inflation, you know?”