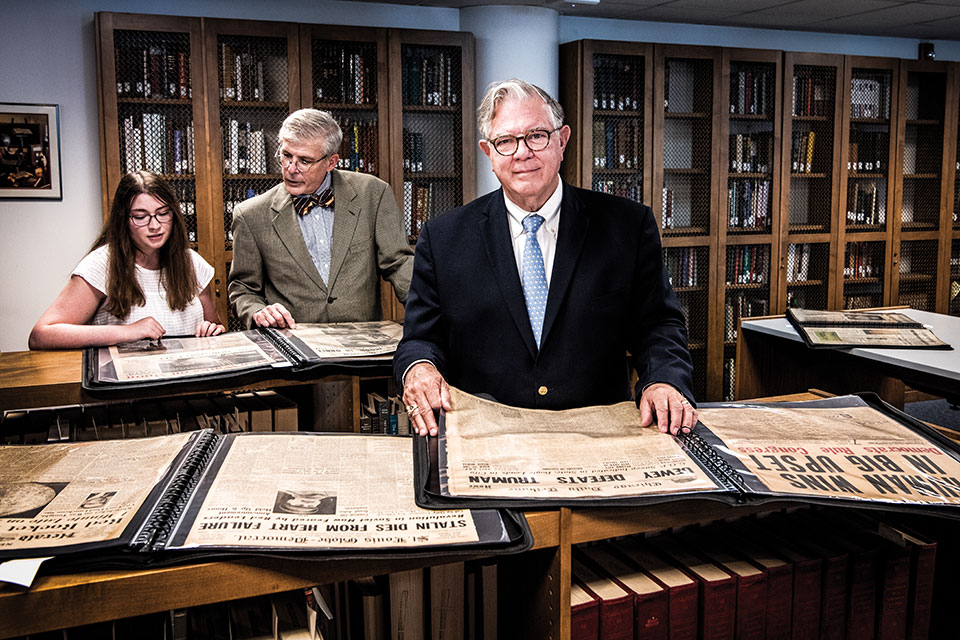 Dr. Thomas Finan, associate professor and chair of the Department of History, said his faculty members are “absolutely thrilled” about a recent gift to University — a collection of 850 newspapers dating from 1683 to 2020.

“I have faculty so fired up about this collection that they’re planning to have students work with the newspapers this semester,” Finan said. “We emphasize the use of primary source research (firsthand accounts) with our students, and when you can put original documents into their hands, whether it’s a manuscript, a newspaper, a letter or a photograph, it’s a game changer. They’re engaging with history on a whole new level because they’re handling the actual sources, not transcriptions.”

Power of the Press 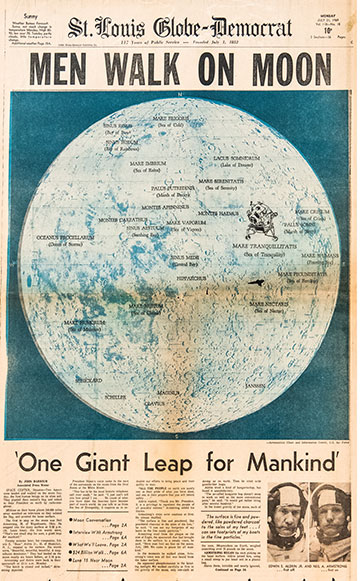 Newspapers in the collection chronicle major milestones throughout history — from the ratification of the U.S. Constitution, Neil Armstrong’s walk on the moon and the election of President Barack Obama — to the darkest moments, including the assassination of President John F. Kennedy, the Space Shuttle Challenger explosion, the death of Princess Diana and the 9/11 terrorist attacks.

The newspapers printed before the 1870s on rag paper made of cotton and linen fibers look nearly as pristine as the day they were issued. Newspapers printed later using wood pulp and chemicals would crumble to the touch if not handled properly.

Finan said the comprehensive collection allows students to develop knowledge, skills and analytical abilities by exploring the nuances of media coverage of past and present events. Researchers can read, side-by-side, newspapers printed in Britain and America during the Revolutionary War to see how writers used the press to boost morale, increase support or fan the flames of insurgency.

“The 21st century college student is overloaded with media and video, and they put a primacy on it without understanding how it can be doctored or manipulated,” Finan said. “When we introduce these newspapers, it gives us a vehicle to talk about the different types of coverage and analyze it. We can ask why, for example, the Gulf War coverage was more sanitized than the Vietnam War coverage. This is a historian’s job, and that’s what makes this collection awesome.”

The newspapers were donated to the University by Timothy Drone (A&S ’72, Grad A&S ’74, Grad CSB ’77) and his wife, Jeanne. Drone said he spent more than 30 years and thousands of hours amassing the collection.

He is especially fond of the earliest papers, before photography appeared on the pages. He points to an 1861 edition of The New York Herald reporting troop positions during the First Battle of Bull Run. Minus an illustration of the Civil War battlefield, the front page is filled with columns of dense, descriptive text. 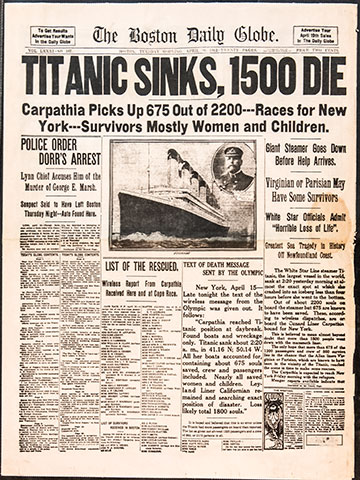 The front page of The Boston Daily Globe from April 16, 1912, announces the sinking of the Titanic.

“Reading a book about the Civil War might be fascinating but leaves you at a loss,” Drone said, “This article offers first-person, detailed discussion, not second-hand information. If you pick up and read this newspaper, you are on the battlefield. You can hear the gunfire. You can smell the dead.”

These historic newspapers stand in contrast to newspapers printed during World War I, where lengthy text gave way to large pictorial features with gory battlefield images that left nothing to the imagination.

“With earlier newspapers you had to be literate to get the news, but once photography hit the pages, the news became accessible to all; everyone could be knowledgeable,” Drone said.

The newspaper collection also boasts an impressive number of political cartoons that praise, attack and lampoon leaders and issues over the last two centuries.

“If you think the discourse and name-calling today is distasteful, it’s a cakewalk compared to what editorialists had to say about President Lincoln and President Grant,” said Drone, a retired Commerce Bank executive. “Writers spewed evil, terrible things and called leaders murderers and child-eaters. It was brutal.”

Freedom to the Press

The newspaper collection will be housed and available for use in the University’s Pius XII Memorial Library Archives, which serves the SLU community, as well as external patrons. University Archivist Caitlin V. Stamm said that includes academic researchers, genealogists, local historians and other libraries/archives throughout the county. 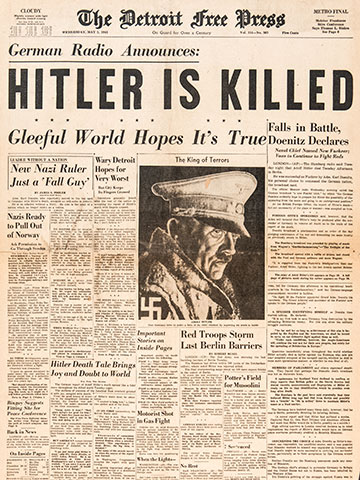 "Hitler Is Killed" according to the front page of The Detroit Free Press newspaper on May 2, 1945.

Stamm said prior to the Drones’ gift of the historic newspapers, SLU’s collection of newspapers and clippings focused primarily on newspapers from the St. Louis area, including the St. Louis American, and SLU’s student newspaper dating back to 1919 when it was called The Billiken. The Drones’ collection builds on the St. Louis material by adding more than 100 German language newspapers printed between 1920 and 1930 in south St. Louis, then home to a vibrant German community.

“The Drones’ collection addresses pivotal moments throughout our region, nation and world, and it allows us to put SLU’s 200-year history into context,” Stamm said. “It expands our ability to address any number of topics in history and can be used by researchers in a myriad of disciplines, including art, design, politics, athletics and the sciences. We are excited to show our patrons how every piece of a newspaper is an important tool for discovery, whether it’s the design, images, advertisements, condition and more.”

In addition to the newspapers, Timothy and Jeanne Drone, and his brother, James Drone (A&S ’70, Law ’73) and sister-in-law, Carolyn (Winchester) Drone (A&S ’70), donated to the University more than 65 acclaimed works by Midwestern artists, works by female artists of the early 20th century and a collection of Civil War memorabilia. 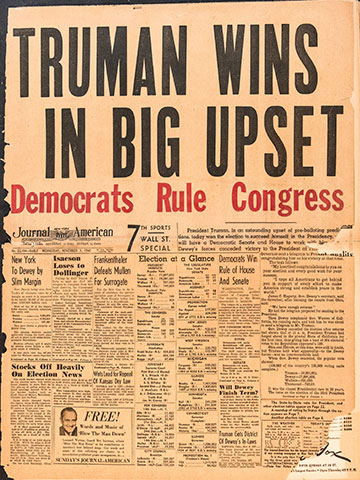 Timothy Drone said he believes growing SLU’s collection of art, artifacts and documents reflects the core missions of the University — teaching and research — and he encourages fellow alumni to buy into this mission in both large and small ways.

“The Drones’ newspaper collection enhances research opportunities for Saint Louis University students and faculty,” said Sheila Manion, vice president of development. “Tim and Jeanne recently included the University in their estate plans as well, and we are extremely grateful for their generosity and support.”

Drone said he plans to continue providing students and faculty with access to primary sources. The self-described “compulsive collector” is rounding out a few more collections to donate to the University, including a coin and currency collection, and a number of black-and-white photos from the 1840s to the early 20th century.