Saint Louis University is ranked among the top Jesuit universities in the country. In addition to being recognized for world-class faculty and academic programs, we’ve also received honors for our efforts to serve others and our commitment to making an extraordinary education attainable. 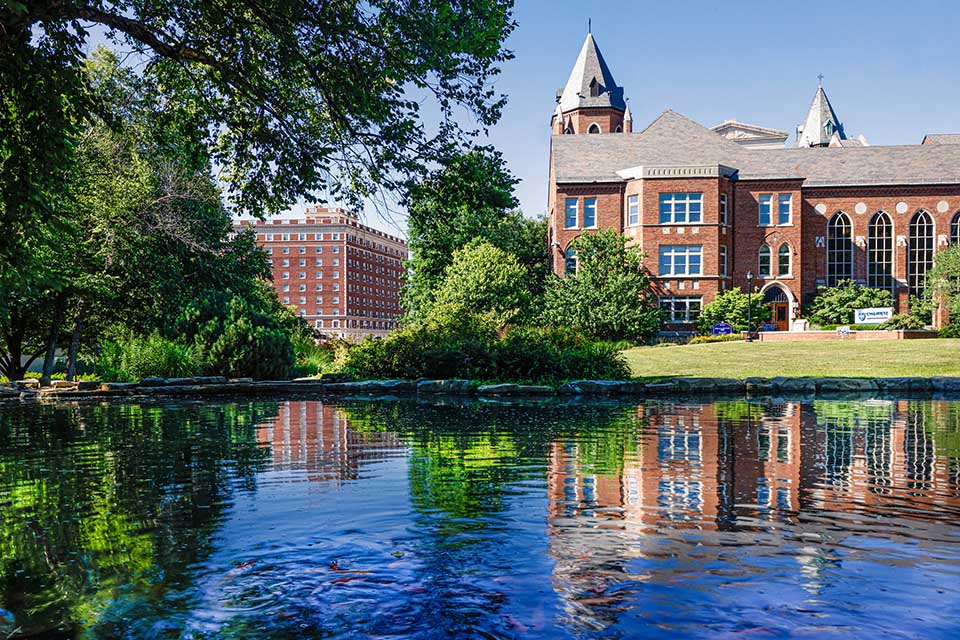 National groups also make note of our beautiful campus, recognizing SLU for its historic buildings, parklike spaces and commitment to sustainability.
No.57

A college education is a significant investment. So it’s especially rewarding when the experts recognize SLU’s efforts to keep tuition affordable and to ensure that all students can achieve a Saint Louis University education.

SLU was named one of approximately 220 U.S. colleges and universities that provides a "first­-class education at affordable prices." In the publication, Barron's 11th edition calls SLU an "urban research university that refuses to act like one, caring for each individual as a total person and drawing its undergraduates into the life of the surrounding community."

Trust is a core value at Saint Louis University, central to the University's mission as a leading Jesuit research institution. SLU ranks No. 39 among the most-trusted universities in the U.S., according to a 2022 Most Trusted Brands report by Morning Consult, a global decision intelligence company.

The Most Trusted Brands report also rated trust in universities among underrepresented groups. Among Hispanic adults, SLU was the No. 5 most-trusted university.

Across the nation and around the world, Saint Louis University is routinely recognized for rigorous scholarship and research in a variety of disciplines.

Twelve academic programs at SLU are currently ranked in the top 50. Rankings are for graduate programs unless otherwise noted.

(*Indicates most recent ranking for programs not re-ranked. U.S. News does not rank all graduate programs every year. Some disciplines are ranked on four or six-year cycles.)

Saint Louis University is ranked the No. 6 Catholic university in the U.S. in the Wall Street Journal/Times Higher Education 2021 college rankings. In the overall rankings, SLU was ranked No. 114 among nearly 800 U.S. colleges and universities ranked this year.

Forbes’  list of 600 undergraduate institutions is based on the quality of the education, as well as student experiences and achievements.

SLU's excellence is noted in Best 388 Colleges: 2023 Edition. The organization's rankings are based on surveys of more than 160,000 students at all 388 institutions.

Princeton Review ranks SLU in the top-50 schools for undergraduate entrepreneurship studies. This ranking recognizes colleges and business schools with faculty who are genuinely engaged in entrepreneurism, rich in-class and out-of-class experiential components, and extraordinary financial and networking support for students.

SLU ranks No. 7 on the Niche 2023 "Best Catholic Colleges in America" list. Niche bases its rankings on key statistics and student reviews.

Other top-100 national rankings from Niche are:

SLU is one of only 15 Catholic universities to receive a Carnegie Classification of “high” or “very high” research activity.

This listing of the 320+ "best and most interesting" schools in the United States, Canada and Great Britain is based on the quality of academic offerings and student responses on a variety of topics.

Learning outcomes improve when students are curious, interested or passionate — in other words, “engaged.” At SLU, service is integrated into academics, extracurricular activities and nearly all we do, and the nation has taken notice.

In 2023, Princeton Review named SLU the No. 3 university in the U.S. for community service engagement, and SLU ranks No. 9 on Princeton Review's list of top private colleges for making an impact, reflecting student responses to questions about service opportunities, student government, sustainability efforts and on-campus student engagement.

This honor recognizes institutions' commitment to engaging with local, national and global communities. Nationwide, only 361 institutions hold the classification, and only 83 received the designation in 2015, when the designations were last announced.

SLU ranked No. 21 on Princeton Review's 2023 list of colleges and universities with the best counseling services. The rankings are based on students' assessment of the counseling services available on campus. SLU's University Counseling Center offers individual psychotherapy, case management, outreach and prevention, and educational groups.

SLU ranked No. 68 on the U.S. News 2021 "Best Colleges for Veterans" list, which recognizes schools that participate in federal initiatives aimed at making a college education more affordable for veterans and active-duty service members.

SLU was named to Princeton Review's 2022 "Guide to Green Colleges," which lists U.S. colleges and universities recognized for strong commitments to sustainable practices and programs.

SLU has provided me mentors that value my well-being, as well as my academic growth. SLU molded me into a person who feels confident to go out into the world and make a difference."