Saint Louis University School of Law hosted the Hon. Justice John MacMenamin of the Supreme Court of Ireland for a weeklong visit April 10-14. 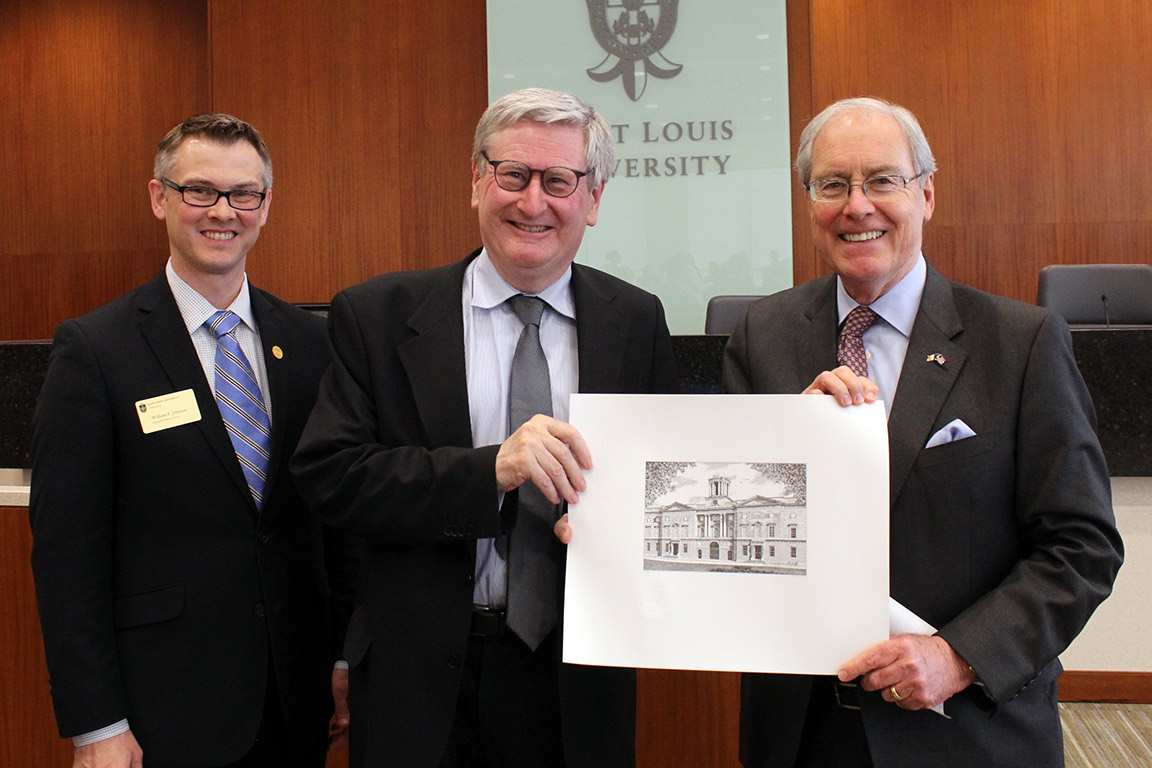 MacMenamin was appointed to the Supreme Court of Ireland in February of 2012. Since his appointment, he has decided a number of cases with a human rights dimension, addressing issues such as the rights of asylum seekers, children in need of special care and treatment of prisoners.

MacMenamin first became engaged with the School of Law's Center for International and Comparative Law (CICL) in 2015, when he hosted a group of alumni for a tour of the historic Green Street Courthouse, as well as a visit to the library of the Honorable Society of the King’s Inns, as part of a SLU LAW visit to Dublin that occurred at the invitation of then-U.S. Ambassador to Ireland Kevin F. O’Malley (A&S ’70, Law ’73). MacMenamin repeated his generosity during a second alumni trip in October 2016.

Justice MacMenamin's visit helped strengthen our relationship to the legal community in Ireland and in Europe, which will be an asset for years to come."

During his visit to St. Louis, MacMenamin toured St. Louis historical sites and sat in on several court hearings. He also gave two presentations: the first was primarily addressed to SLU LAW students and faculty and focused on “The Rule of Law in a Time of Change,” and the second, which was open to alumni and the broader St. Louis legal community, welcomed nearly 100 guests and was titled “In Defense of the European Union.”

‘In Defense of the European Union’

MacMenamin, who noted that he has not been an uncritical supporter of the EU, discussed its impressive accomplishments over a short amount of time, particularly for the Irish, who saw peace and stability brokered in large part as a result of the EU’s efforts.

“It’s very easy to forget the extent of that achievement. It’s very easy to forget that that achievement was the result of the work of politicians,” he said. “Sometimes you have to recognize that politicians do a very hard job. … In some ways the paradox of the EU is that it’s a top-down organization which was made by politicians and diplomats and the court, and the problem that befalls such organizations is to establish the links between the institutions and the people. The weakness was it didn’t always bring the public with it. The EU faces problems of xenophobia, racism and Islamophobia, and the Euro-skeptic parties pose an existential threat to the European Union.”

MacMenamin noted that besides maintaining and extending regional cooperation and peace, the EU also introduced a vast amount of prosperity, environmental work, structural funding and employment and consumer protections, and it has allowed for convenient travel and education benefits for EU students and for all citizens. He also believes that no matter what happens regarding the upcoming series of negotiations related to the U.K.’s withdrawal from the EU (“Brexit”), the futures of the EU and the U.K. are interwoven, and their interests intertwined.

“The challenge of the situation is neither side wants the negotiations to fail, but the risk is, for divergent reasons, the negotiations may fail: on the EU side there may be a temptation to try to ensure that there is no perceived benefit from leaving, and on the U.K. side, there may be an unwillingness to engage in any of the compromises that are necessary to retain access to the market. In many ways, the U.K. wants to avoid the situation of being simply a ‘rule-taker.’ So all these issues are going to be worked out for the next few years.”

MacMenamin said the EU has been a benefit not only for the citizens of Europe, but for the wider world, and that the history of the 20th century demonstrates that the consequences of inter-nation rivalry can literally be fatal for tens of millions of people, affecting not just the nations directly in conflict, but other nations who are brought into the conflict.

“The fundamental trajectory of Europe, I believe, must be together rather than apart. I’m not sure the EU will end up as one, but I’m certain that the interests of all the states of Europe lie in closer cooperation and not in fragmentation. The EU may alter in shape, it may alter in its internal dynamics, it may evolve into a series of arrangements which pose challenges to maintaining an overarching entity, but the one thing I am certain, is that the dream of the 1940s and early 1950s will never be allowed to be turned into a nightmare again.”

"We are so pleased to have had the honor of hosting Justice MacMenamin at the School of Law," said Dean William P. Johnson, J.D., who led the 2015 and 2016 alumni trips to Dublin as then-director of CICL. "I believe it was an incredibly gratifying visit, as well as a tremendous opportunity for our students to hear his perspective on these critically important issues. The issue of Brexit in particular will have a direct effect on the work of many of our students and alumni focused on transnational law practice, so it was valuable to hear such an informed, insightful perspective. Justice MacMenamin's visit also helped strengthen our relationship to the legal community in Ireland and in Europe, which will be an asset for years to come."