Dorsa Derakhshani likes to create a dance with her chess pieces, moving them around the board with flair. Her personal style has led her from competing in tournaments as a small child in Iran to being awarded the titles of Woman Grandmaster and International Grandmaster by the World Chess Federation in 2016.

Now the 19-year-old is playing for the Billikens. Derakhshani is a freshman at Saint Louis University and part of the seven-member chess team. 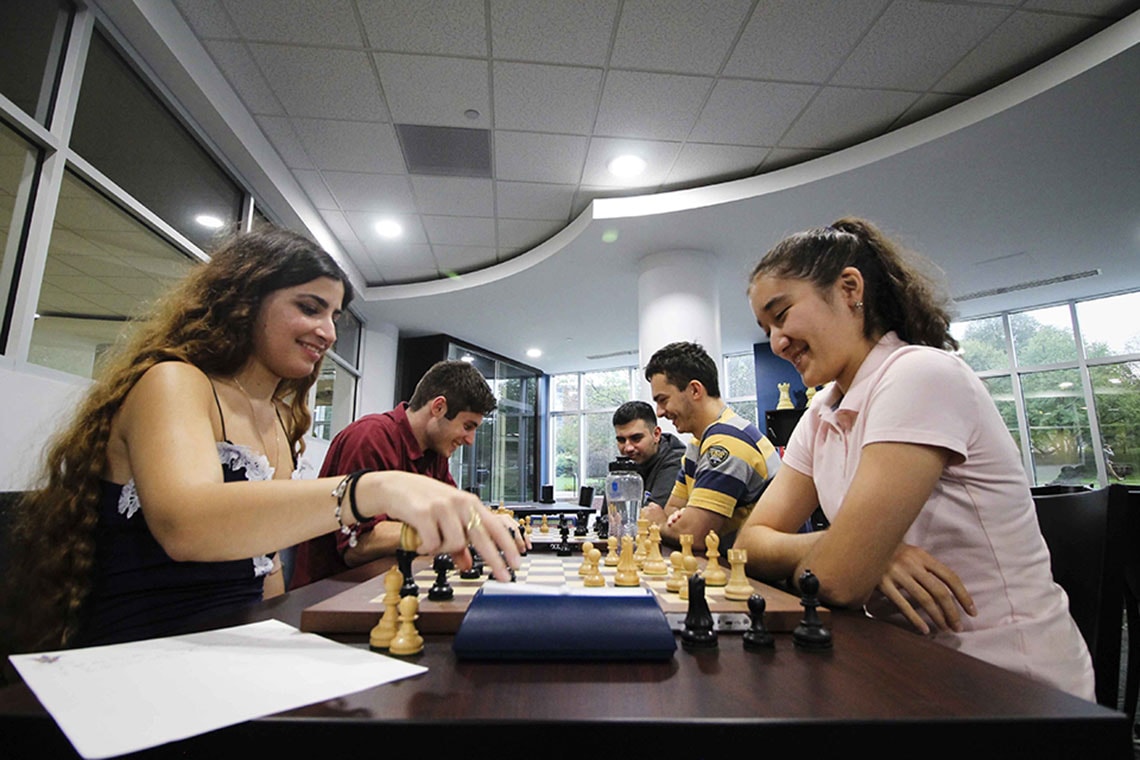 Dorsa Derakhshani, left, is a freshman at Saint Louis University and part of the seven-member chess team. She is playing a practice match against teammate Nozima Aripova. Photo by Ellen Hutti.

“I’m excited to be part of a team and to have a coach who will make me better,” she said. “It is harder to go it alone. You don’t have any stability and a team to depend on.”

Derakhshani has been going it alone for over a year now. She moved from Tehran to Barcelona in 2016 after finishing school to pursue opportunities in chess.  She learned earlier this year that she was officially barred from playing for Iran.

According to The New York Times, Derakhshani will now compete under the oversight of the United States Chess Federation, after Iran issued a ban, allegedly due to Derakhshani’s failure to wear a headscarf during a tournament earlier this year.

Iran has required women to wear the hijab in public spaces and when representing the country internationally since the Islamic Revolution of 1979.

Alejandro Ramirez, the coach of SLU’s chess team, told The Times, “Iran wasn’t letting her play in certain tournaments that she needs federation approval to play in.”

Iran banned Dorsa and her younger brother Borna from the national team following a February tournament in Gibraltar – Dorsa for not wearing a hijab and Borna for playing a paired match against an Israeli opponent.

“It seemed like it came from out of the blue,” she said. “I wasn’t even really playing on the national team. They weren’t sponsoring my tournaments – my parents were.”

Derakhshani told the St. Louis Post-Dispatch she wore a headband at the Tradewise Gibraltar Chess Festival.

“I wasn’t breaking any rules,” she said in the interview. “I wasn’t even in Iran. I wasn’t on the national team.”

News of the Iranian ban broke in early October. Derakhshani said her parents, who still live in Tehran where her father practices medicine, have been supportive.

“Their friends understand,” she said. “And one day all the attention will die down and I can just play chess.”

Derakhshani will now compete as an official U.S. player. U.S. Chess is the national governing body for chess competition, sanctioning championships and overseeing player rankings. Borna attends boarding school in the United Kingdom and plays chess for the English Chess Federation, according The Times of London.

Homeschooled by her mother, Derakhshani excelled at music and ballet as a small child. Once she found chess, she knew she had found her calling. She won her first tournament before she was eight years old.

“It was a big surprise for everyone, because there were players who already had private coaches and they came to win," she told WBUR Boston in an interview published earlier this year. "I came out of nowhere, and I won the tournament. I remember that everybody else was wearing a scarf, even under 8. But I wore a princess dress and a tiara. And it was really cute.”

“I’m really proud of my country’s history,” she said. “I dream about home and it makes me proud any time I see an Iranian name somewhere. But I couldn’t play under the Iranian federation’s rules, which I would have to do if I took their money.”

Derakhshani had met SLU’s chess coach in 2014 while competing in other international tournaments. When she was ready to apply to colleges, SLU was at the top of her list.

"We met before I was even with SLU," Ramirez said. "When I began looking at players who might fit at SLU, she was among those I thought of."

Ramirez said  he was  first and foremost looking for chess players with high moral character, as well as being individually strong chess players. He also looked for players that could work well together.

"People underestimate how much time chess players spend together," he said. "They come from different backgrounds and have different majors, but they are a tight knit group. You can walk into the chess room almost any time and find one or two of them there working together."

Derakhshani took a few months away from chess to study for the SAT and apply to universities in the U.S. She found out while at an Icelandic tournament in April that her visa was approved and she could start school this fall. She moved to St. Louis in July.

Why SLU? Besides having a world-class coach, the top chess club in the nation and being in the “chess capitol of the United States,” SLU has one other amenity that the other schools she applied to did not – a medical school.

“I want to either be a doctor or a dentist,” she said. “I wanted to be able to come and stay somewhere – not move around all the time.”