SLU Alumnus Shares Message of Resilience, Success and the Power of Mentors 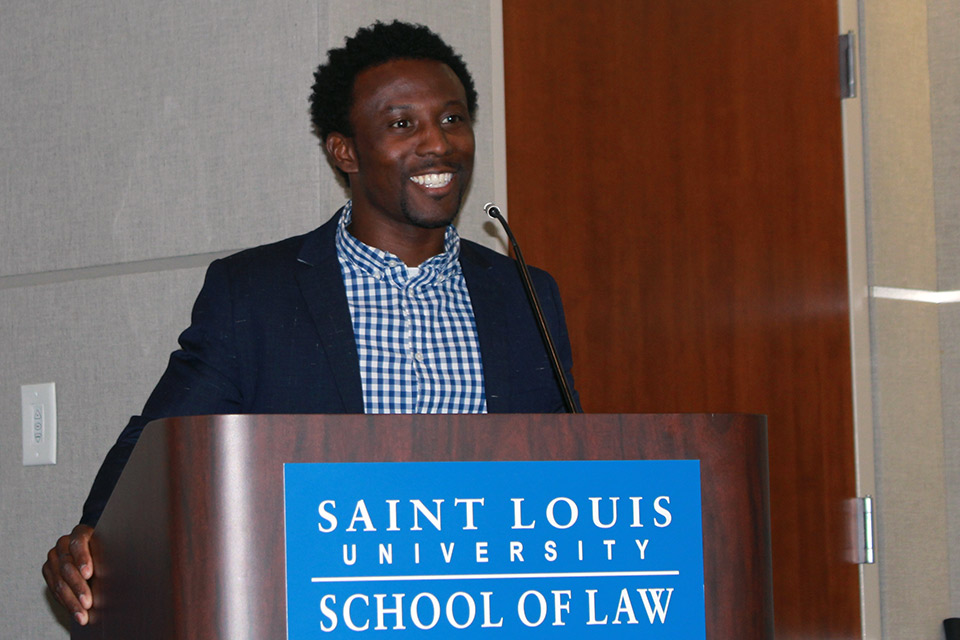 Stanley Andrisse, Ph.D. (A&S Grad '14), speaks at the School of Law Thursday, Oct. 12, at "From Prison Cells to Ph.D.," co-sponsored by the Legal Clinics, Doisy College's Department of Occupational Science and Occupational Therapy, and the College for Public Health and Social Justice's social work program. Photo by Maria Tsikalas

He is an adjunct assistant professor at John Hopkins School of Medicine and recently accepted a tenure-track assistant professorship at Howard College of Medicine. Inspired by his father who died of complications from Type 2 diabetes, the Ferguson, Mo.-native is doing post-doc research on diabetes and the linked disorder polycystic ovarian syndrome (PCOS), which is the leading cause of female infertility.

You would never know that Andrisse, who also has an MBA, has multiple felony convictions on his record and served more than three years in prison on drug trafficking charges.

At a talk Thursday at Saint Louis University School of Law titled “From Prison Cells to Ph.D.,” Andrisse described the drive behind his success in school and his subsequent career as a young biomedical scientist.

While in prison, Andrisse decided to use education to change his life when he got out. With the encouragement of his mentor, then-SLU professor Barry Bodie, M.D., he spent his time reading research article after research article, which Bodie mailed to him in five-page installments due to the facility’s restrictions. Bodie also successfully testified on his behalf to a judge asking for a reduced sentence and helped him get his doctorate program applications ready when the time came.

There are many others like me waiting to get in the door, the door of using education as this stepping stone to recover from incarceration."

Andrisse applied to many Ph.D. programs, ranging from “safety” schools to “highly unlikely” prestigious schools, but because of his criminal record, he was rejected from all of them – except SLU.

At SLU, he worked toward his Ph.D. in physiology under the guidance of biology professor Jon Fisher, Ph.D., while also pursuing his MBA from Lindenwood University. He graduated in four years – two years early – near the top of his class.

“For me, it was almost a life-or-death scenario,” he said. “It wasn’t that I was incredibly intelligent; I just had a work ethic that was stronger than the peers in my program because I was fearful that I would get kicked out. I wasn’t even knowledgeable about whether anybody else knew of my background. I didn’t tell any of my friends who were grad students with me because I was fearful they would no longer want to hang out with me. I kind of just hid it.

“What I’ve found is that a lot of people in my position who have been incarcerated and then pursue a college education – they have this drive within them to push further,” he said. “So for me, a person with three felony convictions now a professor at one of the top medical institutions and one of the top historically black colleges and universities, for me, education has been the biggest transformational piece of my life.”

Incarceration in the U.S. has grown to epidemic proportions, Andrisse said, and opening the doors of academia to more people such as himself is a necessity.

“There’s this idea that a person like myself is an anomaly, but that is not the case,” he said. “There are many others like me waiting to get in the door, the door of using education as this stepping stone to recover from incarceration.”

Andrisse, however, did not mince words when it came to the reality of that “stepping stone” coming to fruition. He described friends of his who, after release, were not as motivated and ended up back in cells or killed.

“When I present to younger crowds, I don’t want to give the perception that you can make these terrible decisions and then end up in the position that I’m in. Many people who made the decisions that I made are not in this position, and that’s the actual reality of the situation.”

Today, in addition to founding and running the nonprofit From Prison Cells to PhD, which mentors disadvantaged youth and formerly incarcerated individuals, Andrisse is actively working on “Ban the Box” campaigns to persuade colleges and universities to remove from their application the check box that asks applicants to disclose whether they have a criminal record. The goal is that without that question, applicants will have a better chance of being judged fairly for their academic qualifications and intellectual curiosity rather than by the mistakes of their past.

That box might have prevented Andrisse from going to graduate school at all, had it not been for the advocacy of his mentors, Bodie and later Fisher.

“They believed in my full potential even before I did,” he said. “So I’m very grateful to come from the SLU family.”
--
Andrisse’s talk was made possible by sponsorship from the School of Law Legal Clinics, Doisy College of Health Sciences Department of Occupational Science and Occupational Therapy, and the College for Public Health and Social Justice's social work program.