Chaifetz Group, the private investment firm of entrepreneur, investor and philanthropist Dr. Richard A. Chaifetz, and Arch Grants, a St. Louis-based non-profit that provides equity-free grants to early-stage entrepreneurs, are announcing a new partnership which will provide continued investments and support for St. Louis-based startups.

Chaifetz is a Saint Louis University alum, board member and donor. 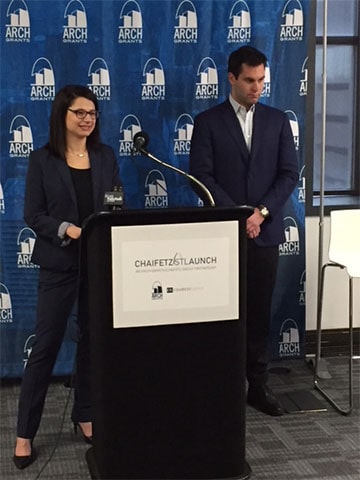 Emily Lohse-Busch, executive director of Arch Grants, and Ross Chaifetz, director of venture capital at Chaifetz Group, announced a partnership on Oct. 30 to encourage entrepreneurship and innovation in the St. Louis region.

The two entities will publicly kick off the partnership with the inaugural Chaifetz STLaunch℠ investment pitch competition event, which will be open to the public, and held at Chaifetz Arena on the campus of Saint Louis University in January 2019.

The two organizations are introducing Chaifetz STLaunch℠, a competitive investment pitch event through which Chaifetz Group will make equity investments in past Arch Grants recipients in the St. Louis region.

A select group of finalists will pitch to a select panel, with at least one past Arch Grants recipient selected for an equity investment of up to $1,000,000 from Chaifetz Group.

In addition to the partnership, Chaifetz Group is enhancing its presence in the St. Louis region, and is seeking new investment opportunities in early- and mid-stage businesses.

To be selected as a finalist and be eligible for an investment through Chaifetz STLaunch℠, companies must have a presence in, or connection to St. Louis. The goal is to build the momentum around St. Louis’ burgeoning start-up community, which is benefiting the entire region.

Companies receiving equity investments will have access to advisors and mentors within the Chaifetz Group network, and have the opportunity to capitalize on other relationships and resources of Dr. Richard Chaifetz and Chaifetz Group, such as SLU’s Richard A. Chaifetz School of Business, Chaifetz Center for Entrepreneurship, and others, in addition to the myriad resources they access through the Arch Grants network.

“Our goal is to make sure that Arch Grant recipient companies have access to the resources they need to stay in St. Louis and succeed, and follow-on investment is critical for many of them. This commitment from Chaifetz Group amplifies the impact of our unique model and represents additional investment into the St. Louis ecosystem. We’re thrilled to partner with them to better support and empower St. Louis entrepreneurs,” said Emily Lohse-Busch, Arch Grants executive director.

“Chaifetz Group is incredibly excited about collaborating with Arch Grants and the announcement of Chaifetz STLaunch℠. St. Louis has established itself as a premier market for emerging startups across the United States, and this event will showcase the relentless talent of local entrepreneurs and their businesses. We view this as a major stepping stone for St. Louis’ venture capital scene. Chaifetz Group’s unique experience as operators, combined with our deep financial resources and local community partners, will ensure St. Louis continues to thrive as a leading start-up ecosystem now and in the future,” said Ross Chaifetz, director of venture capital at Chaifetz Group.

“The partnership which Arch Grants and Chaifetz Group announced today is an exciting step in our city’s evolution into a national hub of entrepreneurship and innovation. Arch Grants has catalyzed a tremendous amount of growth in St. Louis’s startup sector through their program, and attracted many companies from all over the country to St. Louis. This commitment of follow-on funding for Arch Grants companies from Chaifetz Group is just the latest feather in their cap. Founded just seven years ago, Arch Grants has had a transformative effect on our community, our city and the future economic vibrancy of our region,” said Lyda Krewson, mayor of St. Louis.

“The partnership between Chaifetz Group and Arch Grants represents an inflection point for the St. Louis startup community. Thanks to the vision of early Arch Grants supporters and founders, St. Louis is approaching critical mass: attracting investors from outside instead of leaving for more capital-rich environments. This new partnership offers a crucial stepping stone for promising, high-growth companies, which might otherwise have left to seek seed funding from other cities. This seed funding opportunity will enable the strongest startups in St. Louis to confidently put down roots while growing rapidly toward high-quality, later-stage venture funding present in the area,” said Brian Marggraff, who was an Arch Grant recipient in 2014 for his first venture, Betabox. He has since founded Epharmix in St. Louis and serves as CEO.

Chaifetz Group and Arch Grants see this as a meaningful first step in building a multi-year partnership between the two organizations. Outside of the Chaifetz STLaunch℠ investment pitch competition, Chaifetz Group is committed to making additional, significant investments across multiple asset classes in the St. Louis region over the next several years.

Arch Grants is a nonprofit organization that is building a new economy by providing $50,000 equity-free grants and pro bono support services to entrepreneurs who locate their early-stage businesses in St. Louis. Through its competitive Global Startup competition, Arch Grants retains and attracts the most innovative entrepreneurs to the St. Louis region. This program is an aggressive effort to inspire the next generation of employers, civic leaders and philanthropists for St. Louis.

Chaifetz Group is a venture capital and private equity firm specializing in high growth early and mid-stage companies. Led by entrepreneur and investor Dr. Richard A. Chaifetz and anchored by his permanent capital base, Chaifetz Group has an established track record of partnering with visionary entrepreneurs and management teams to build and grow world-class businesses.