SLU Legends and Lore: The Oriflamme

King Arthur had his Knights of the Round Table. Robin Hood had his Merry Men. Saint Louis University has its own storied band of student leaders – the Oriflamme – whose sacred mission is to help SLU’s newest students feel at home – as they move into their new dorm rooms or need advice about life on campus. 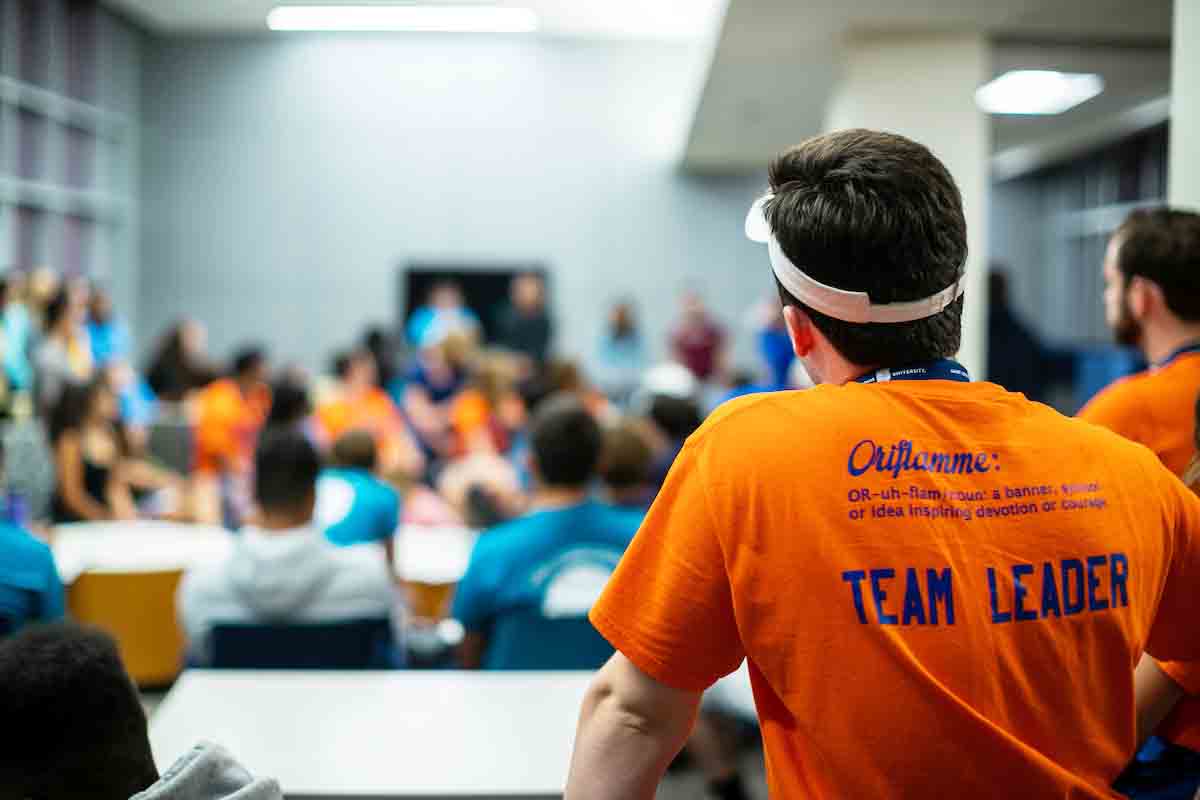 Heirs to a Heroic Legacy

SLU’s Oriflamme takes its name from a storied symbol – one with “magical powers to confound the foe.”

The name comes from Latin and is a combination of aurum meaning “gold,” and flamma, the word for flag. The original Oriflamme was a holy banner carried by French kings, and was also known as St. Vermillion.

Legend has it that the banner may have been hoisted as early as the Dark Ages by royalty including Charlemagne. One especially gory tale claims that the flag’s original color — red-gold — came from the blood of St. Denis after he was beheaded in 358 C.E.

The Oriflamme’s place in history was secured when Prince Louis of France, later King Louis VI, rode under its auspices to triumph over King William Rufus of England in 1097. That victory cemented the flag’s place as the premier flag of France. The cry, “To raise the Oriflamme,” stirred hundreds to the defense their realm.

French armies carried it into battle more than 20 times. One of its most famous bearers was King Louis IX, a future saint and the namesake of both the University and City of St. Louis.

A Symbol of Solidarity 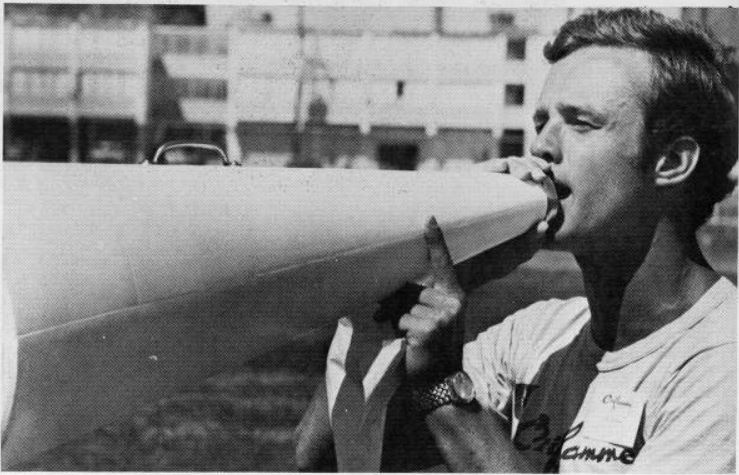 Centuries after the Oriflamme rallied armies, a new generation took up the symbol, serving not a king, but their fellow Billikens.

As SLU gained prominence as a leading American university in the late 1950s and 1960s, University leaders and students recognized the need for “ambassadors” to guide visitors and new students at events including registration.

The group consulted renowned Jesuit scholar and SLU faculty member Walter Ong, S.J., about what to call themselves. Ong suggested “Oriflamme,” because he thought the name would inspire loyalty to SLU.

Mary Bruemmer, another leading University administrator who went on to advise the group for decades, urged them to adopt it to symbolize their bond with the University community.

The group’s role in SLU life quickly evolved, and today, no SLU move-in is complete without Oriflamme members and their signature blazing orange T-shirts.

The group quickly grew beyond its original 16 male members. Oriflamme went co-ed in 1972. 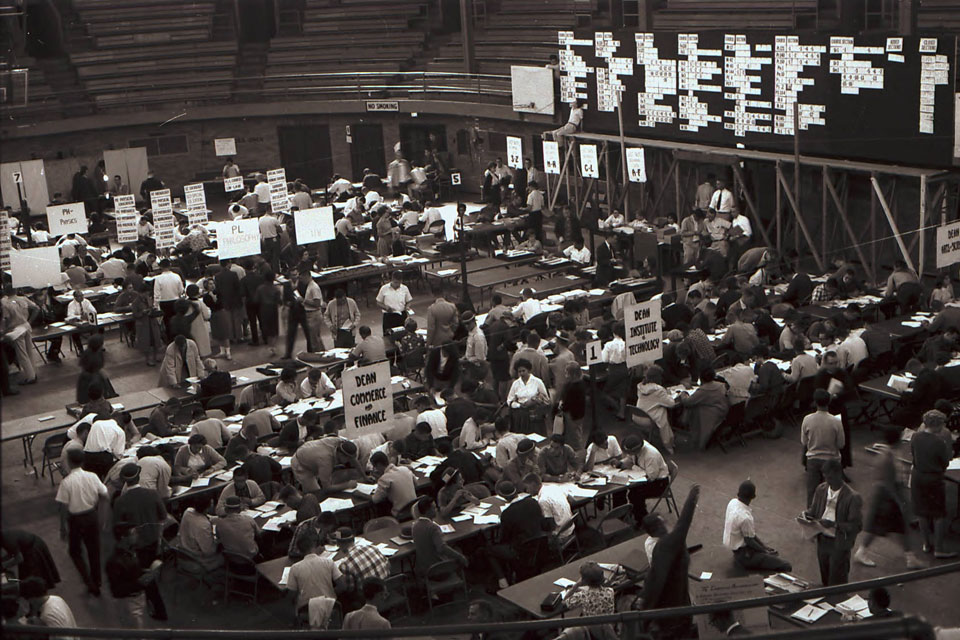 In 1965, the group took over orientation and welcome duties for the University. Over time, Oriflamme leaders dove into the thick of fall move-in, hoisting boxes, carrying couches up flights of stairs and leading small groups to help new Billikens acclimate to campus.

Oriflamme members now lead new freshman in the charge to show off their SLU spirit, and urge them to jump into campus life at Fall Welcome activities. 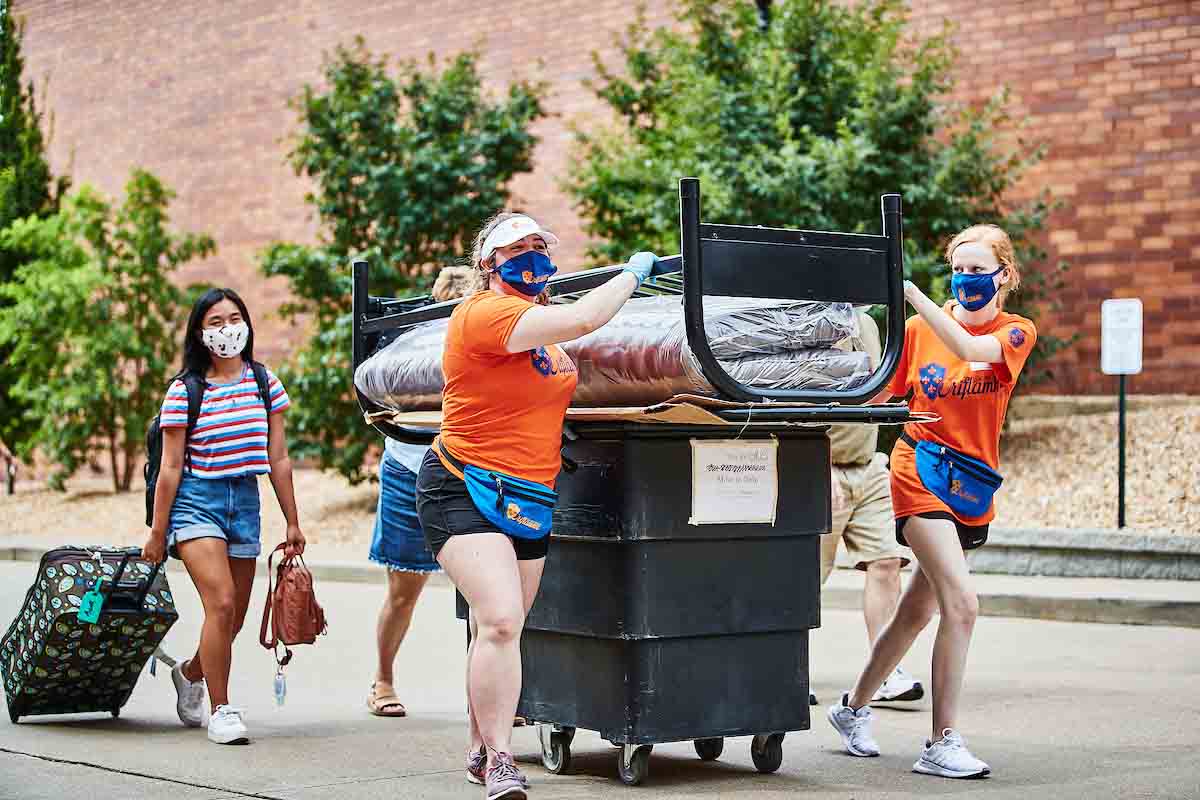 Members of Oriflamme hard at work helping with fall move-in.