Dear St. Nick may be known for his red suit, but a close relation – Blue Santa – wears a color unique to Saint Louis University. 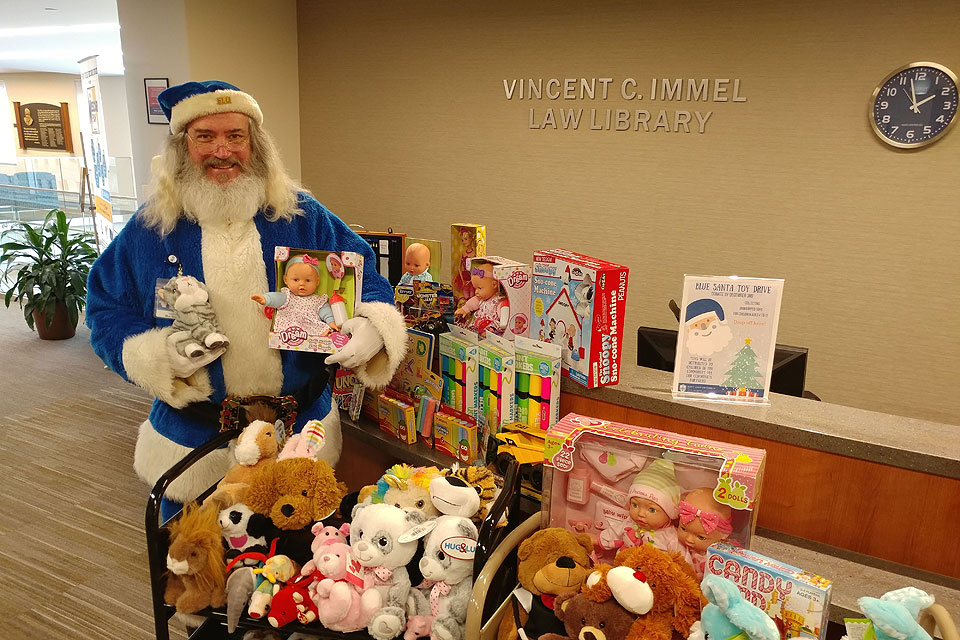 Always eager to help his more famous cousin make the Christmas season merry and bright, Blue Santa spends his time collecting gifts donated by SLU staff, faculty and students in the weeks leading up to the holiday to help make the season more joyful for kids across St. Louis.

A First Visit Inspires SLU Community to Give

Blue Santa first took a campus tour in December 2006, visiting SLU with an elf eager to become a Billiken.

Adam Peck, former director of the Student Involvement Center, recalls catching site of a jolly figure dressed head to toe in SLU blue stopping by offices to ask staff and faculty to help him reach families and children living in the Midtown neighborhood around the University.

“The first year, we were so unprepared for how generous everyone would be,” Peck recalled. “We didn't have any wagons or golf carts, just a sack Blue Santa borrowed from his cousin, Kris from the North Pole, for people to put toys in.  We'd walk away from offices dropping toys as we went because our arms were too full.”

With so many donations, Blue Santa realized all of the toys might not fit in his energy-efficient, low-emission mini-sleigh, pulled by a single caribou, Lily Flower. Returning to Busch Student Center, Peck sought help from Cindy Bush, a former staff member. Bush was so taken with helping Blue Santa distribute the toys that she began dressing as a Christmas tree in the years following his first visit to SLU.

Known as “The Cindy Bush,” she and Blue Santa began sharing the season’s joy with children at SSM Health Cardinal Glennon Children’s Hospital. Other SLU staff members, including former Registrar John Jaffry, also helped Blue Santa work out the logistics for his visits.

As word about the visit’s impact spread, Blue Santa’s nephew, Purple Santa, partnered with Peck when he moved to Stephen F. Austin State University in Nacogdoches, Texas, to collect presents for kids in the Lone Star State.

Three years after Blue Santa’s first December visit to SLU, as the day to collect the University’s donated toys approached, something was wrong.

University staff and faculty members were about to panic. Letters went unanswered. Blue Santa’s North Pole phone line rang and rang. What was the SLU community to do?

The worry inspired the staff of the Center for Service and Community Engagement, led by Bobby Wassel, Ph.D., to stage an expedition north. Bundled in Billiken fleece, Wassel and his team braved the frost, cold and darkness of the Arctic to help Blue Santa find his way back to SLU.

Arriving at the North Pole, the SLU team found Blue Santa had been away on a Silent Retreat with members of the Society of Jesus, to deepen his relationship with God through Ignatian spirituality. No phones or letters allowed. No need for alarm.

After much rejoicing, Blue Santa and SLU resumed their work together, with SLU community members pitching in to make the drive a success.

A Changing Look and a Constant Mission

Over the course of 13 years, Blue Santa has changed up his look from time to time, growing out and clipping his signature beard, and updating his suit as the latest issues of Holiday Vogue have made their way north courtesy of SLU’s University Mail Services. 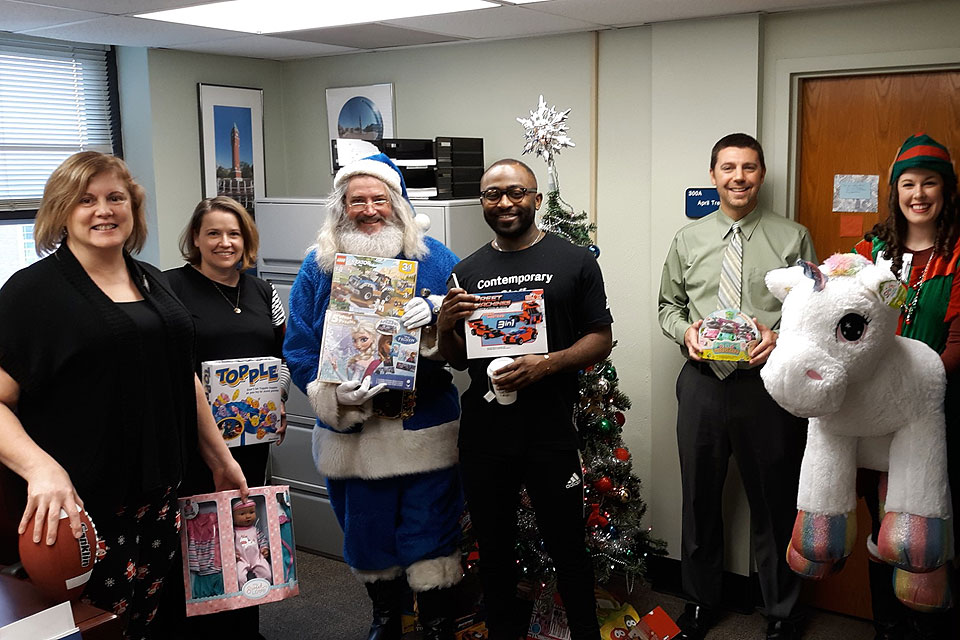 “I think sometimes Blue Santa, like the rest of us, has had an identity crisis from time to time,” Blue Santa’s close confidant, Jim Greathouse, senior training specialist with the Division of Human Resources, explained. “I mean, I think he’s even whitened his hair and beard to look more like the big man, Santa Claus.”

Blue Santa’s St. Louis-based stylist, Richard O’ Conner of A Cut Above, has been by his side through the transformations, donating the cost of the cuts and colors to help Blue Santa look his best while bringing cheer to the SLU community and beyond.

No matter the fashion, though, Greathouse said that SLU’s Billikens have become near and dear to his heart.

“He so enjoys seeing the child-like looks from SLU students and staff when they see Santa,” Greathouse said. Now, Blue Santa stops for selfies with students and with the opening of Grand Hall in 2017, he makes time to enjoy a hearty bite with students at Breakfast with Blue Santa.

Blue Santa also always keeps his commitment to brightening the holidays for St. Louis kids in mind as he prepares to return to the University year after year.

“Each year, SLU comes through with more and more toys to be donated to charities around the area, proving over and over that SLU is truly made up of men and women for and with other and is dedicated to the service of humanity,” Greathouse said. “And every year, Old Blue tells me, ‘Jim, on behalf of my cousin, Mr. Claus, and all of the members of Northern Polar Elves Local 1818, we can’t thank you enough for all your support and help year after year.’”

And he enlists more and more SLU helpers to make it possible, knowing that Billikens’ dedication to living out SLU’s Jesuit values make them ideal elves, caribou wranglers and holiday helpers.

“I’m certain that all of SLU – every single student, faculty member, and staff colleague – is on my cousin’s ‘nice list,’” Blue Santa wrote in a holiday card left under the University Christmas Tree during SLU’s annual holiday celebration, Christmas on the Quad.

“I know the entire University community can expect more than a lump of coal from me this year," he continued. "I can’t wait to see you all this year and for years to come!” 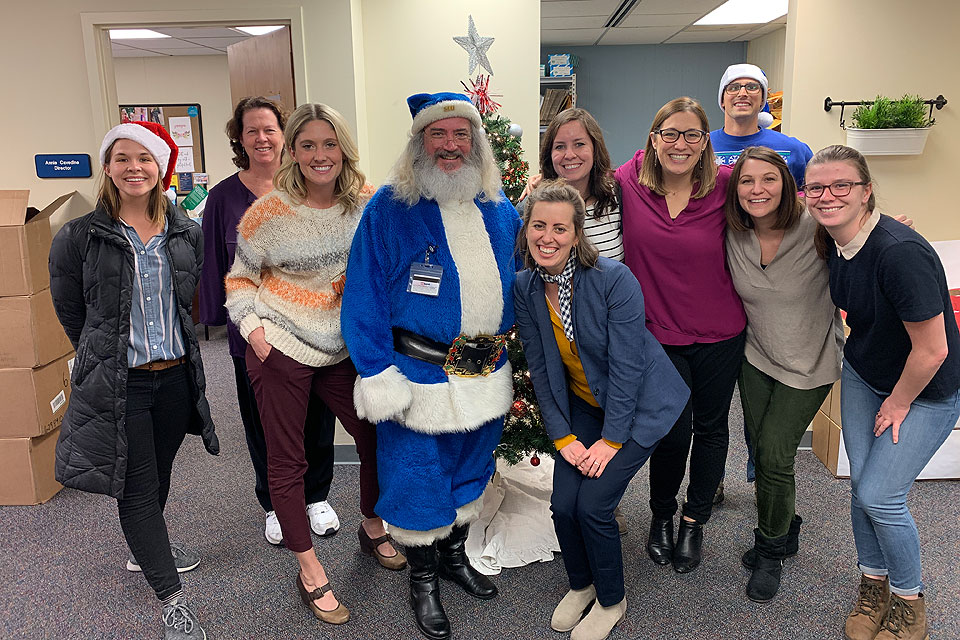 Since his first visit in 2006, Blue Santa has added selfie and photo stops along with breakfast with students to his itinerary when he visits SLU each holiday season. Submitted photo

Story based on the "SLU Legends and Lore" Bicentennial Series by John Waide, University archivist emeritus. Story by Amelia Flood, University Marketing and Communications, from text by Jim Greathouse.