Before Major League Soccer came to St. Louis, before the USL Championship's St. Louis FC and before the North American Soccer League's St. Louis Ambush, there were the Saint Louis University Billikens.

Billikens have competed in NCAA Division I soccer for more than 60 years. Of the first 15 NCAA men’s tournament championships, SLU won 10 of those championships.

No collegiate men’s program rivals the success that has been achieved by the Saint Louis University Billikens. In recent years, the women’s team has added their own chapter to SLU’s illustrious soccer history. 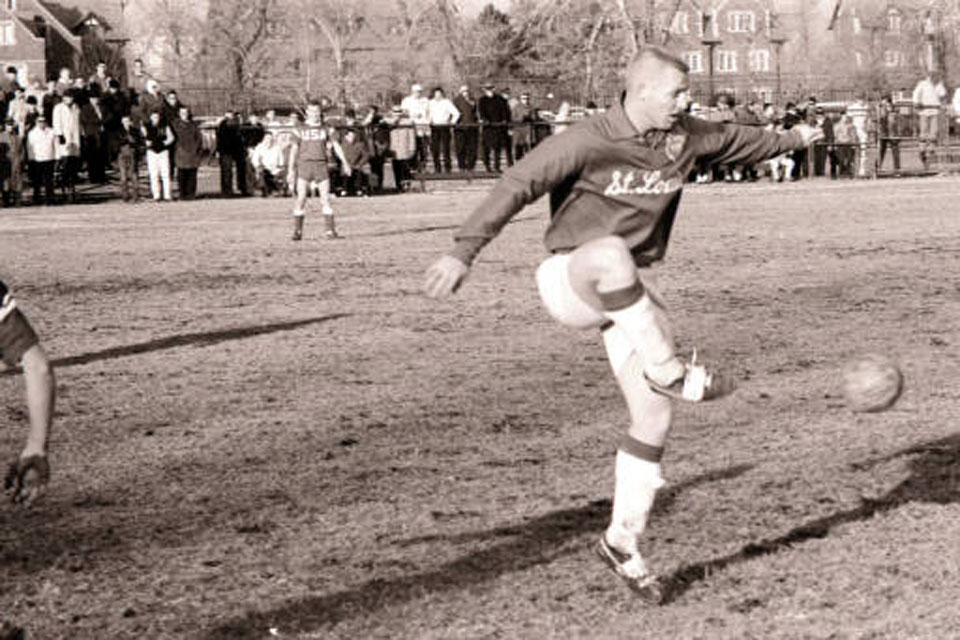 Joe Hennessy, a member of the  Billikens men's soccer team makes a play during a Dec. 28, 1963 game that pitted SLU against the 1964 U.S. Olympic men's soccer team, one of the many highlights in SLU's storied 60-year soccer history. SLU archival photo

In 1959, the National Collegiate Athletic Association (NCAA) sponsored the first Division I Men’s Soccer Championship tournament to determine the Division I men’s national champion. Before 1959, the national champion in men’s soccer was selected by a committee of the Intercollegiate Soccer Football Association (ISFA) based on the season records of the teams and the level of competition.

Although men’s soccer did not become a varsity sport at Saint Louis University until 1959, its roots had taken hold long before. There is evidence of soccer games being played by SLU as early as December 1905, when an “association” team from SLU played the Christian Brothers College team. Association teams were not officially sponsored or recognized by the University but was made up of young men who attended SLU. CBC won this game 2-0, and won a second game played with SLU two weeks later, 3-0.

Saint Louis University men continued to play soccer during the early part of the twentieth century, but most of these games were played against local schools or soccer clubs and the teams were not formally sponsored by the University. 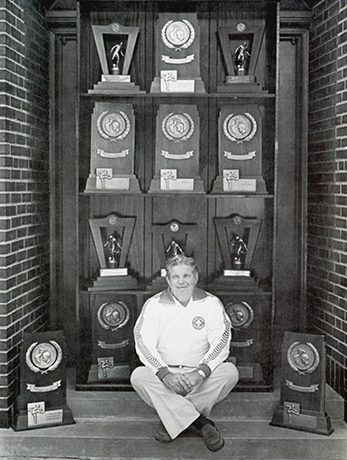 Harry Keough, head coach of the SLU soccer Billikens, is surrounded by 13 NCAA trophies won by the Billikens over their first 18 years of play, 1959-76. SLU Archive Photo.

It was not until after World War II that SLU developed and sponsored its own intramural soccer league. This league played its games in Tower Grove Park, but the league only lasted a few years.

In 1953, Bob Guelker, the physical education instructor at Saint Louis Preparatory Seminary, and Walter C. “Doc” Eberhardt, SLU’s Director of Physical Education, arranged for a game between players selected from the intramural teams of both schools.

After this game, several SLU students tried to persuade Eddie Hickey, Saint Louis University’s director of athletics, to have SLU sponsor a soccer team, but they were unsuccessful in their attempt. Hickey also served as the head men’s basketball coach at the time.

In 1958, Bob Stewart, a former soccer player at Syracuse University, became SLU’s athletic director.  Shortly after taking over, Stewart spoke with Bob Guelker about starting a soccer team at Saint Louis University. They decided that first year to create a “soccer club” which would play games without official University sponsorship.

The success of this team so impressed SLU officials that the University decided to make men’s soccer a varsity sport in 1959. The team was comprised entirely of St. Louis players. The University supplied the players with their uniforms, but the players had to provide their own soccer shoes.

With Bob Guelker as an unpaid coach, the 1959 Billikens won 11 games and lost only once that season, winning the very first NCAA Soccer Tournament Championship. They defeated the University of Bridgeport 5-2 in the championship game. The Billiken soccer team outscored their opponents during that first season by a combined score of 71 to 10.

The 1961 season saw the Billikens finish with a 13-2 record, but they lost their first national championship game to the West Chester State Golden Rams by the score of 2-0. Saint Louis University outscored their opponents 67-15.

The Billikens were once again led in scoring by All-American Gary Balassi with 17 goals, while his teammate Bob Malone was also named an All-American.

The 1962 Billikens returned only four starters from the previous year, but this team achieved the distinction of having Saint Louis University’s first undefeated season as they finished with a 12-0-1 record, defeating the University of Maryland again in the championship game, this time by the score of 4-3.

Gerry Balassi led in scoring for the third straight season with 16 goals. He and Bill Vieth were both named All-Americans.

Although living up to the accomplishments of the program’s first four teams might seem a challenge, the 1963 squad passed the test with flying colors as they finished with a 13-1 record and a fourth national championship.

This team scored a SLU record 94 goals, with Carl Gentile leading the team with another school record 30 goals. Pat McBride contributed 17 assists, a school record which would last for over 30 years until 1965. The Billikens defeated the Naval Academy in the title game by the score of 3-0.

Joe Hennessey was the team’s only All-American player.

The 1964 Billikens lost only once in 13 contests, but that one loss was to the Naval Academy in the NCAA semi-final game by the score of 2-1.

Carl Gentile once again led the team with 27 goals, and both Don Ceresia and Pat McBride received All-American honors. The Bills scored 88 goals for the season including 16 in a game against the University of Illinois.

When the 1965 soccer season began, Coach Bob Guelker’s Billikens had only three starters returning from last year’s team. With all of  SLU’s success during its first six seasons, the one accomplishment that had eluded the Billikens was a perfect season. This team surprised everyone by achieving a perfect 14-0 season, capping it off with a 1-0 victory over the Michigan State Spartans.

The 1966 season marked another first in the history of SLU men’s soccer as it was the first year in the school’s history that Coach Guelker could offer scholarships to incoming recruits. The Billikens finished with a 7-4-3 record, and a loss to the University of San Francisco in the quarterfinals of the NCAA tournament.

Jack Kinealy was once again the Billikens’ leading goal scorer with 11, and he and Steve Rick were named All-Americans.

The 1966 season was also the last year that Guelker would coach the Billikens before he would move across the river to become the first coach for the Cougars of Southern Illinois University-Edwardsville. During Guelker’s eight seasons as the Billiken coach, he compiled a 95-10-5 record, winning five NCAA championships. His teams reached the NCAA championship game on one other occasion, and both the semi-finals and quarter-finals once.

After leaving SLU, he coached SIU to an NCAA Division II championship in 1972, and a Division I soccer championship in 1979. His final collegiate coaching record over 24 seasons was 311-76-26. Coach Guelker also coached the Pan American soccer team in 1971 and the 1972 United States Olympic team in Munich. He was elected to the National Soccer Hall of Fame in 1980. Guelker was a native St. Louisan and a 1949 SLU alum, having interrupted his studies in 1943 to serve in World War II.

The Billikens’ new coach for the 1967 season was another native St. Louisan who was well-known to the soccer community. Coach Harry Keough was an excellent soccer player in his own right. He started at fullback for the U.S. World Cup teams in 1950, 1954 and 1958, and he was captain of the U.S. Olympic team in 1952 and 1956. Keough’s 1950 World Cup team, which included five St. Louis players, pulled off the most unlikely upset in World Cup history when they defeated the heavily favored English team 1-0.

During Coach Keough’s 16 seasons at SLU, he compiled a 213-50-22 record. The Billikens made 15 appearances in the NCAA tournament while he was coach, winning five more national championships, the last one coming in 1973. They only missed participating in the tournament one time.

In Keough’s first season in 1967, the Billikens fought their way to an 8-3-2 record, scoring only 31 goals while allowing 13. They reached the NCAA final game against Michigan State University. The game was played in a torrential rain that flooded the already saturated Francis Field here in St. Louis. The game was finally called in the 42nd minute with the score 0-0. The NCAA named both SLU and Michigan State as co-champions for men’s soccer for 1967.

John Pisani was the Billikens’ leading scorer with 6 goals and teammate Wally Werner was named to the All-American team.

The 1968 squad compiled a 10-1-1 record. The one loss was to the University of Maryland Terrapins in the NCAA championship game by the score of 3-1. The Billikens only gave up only 8 goals all season.

The 1969 Billiken squad dominated during the regular season as they outscored their opponents 36-5 in compiling a perfect 9-0 record. They proceeded to complete a perfect 13-0 season by winning all 4 NCAA tournament games, including a 4-0 shutout of the University of San Francisco in the championship game. This was the Bills’ seventh national title.

Al Trost led the team in scoring for 1969 with 11 goals. Trost was also named to the All-American team, and he was awarded the prestigious Hermann Trophy as the top college soccer player in the country.

The SLU Billikens won their eighth national collegiate soccer championship in 1970 with a thrilling 1-0 victory over UCLA. The game’s only goal was scored by Billiken forward Denny Hadican. For the season, the team gave up only 6 goals in compiling a 14-0-1 record.

The Billikens built on their 1970 NCAA championship by winning 16 straight games during the 1971 season. Their opponent for the championship game, which was held in Miami’s Orange Bowl stadium, was Howard University from Washington, D. C. The Billikens lost to Howard in a heartbreaker by the score of 3-2. The NCAA later determined that Howard had used ineligible players during the season, so the title was stripped and no national title was awarded in men’s soccer for 1971.

Mike Seerey led the Bills in goals with 24 goals. He was also named an All-American and he was the recipient of the Hermann Trophy as the best college soccer player in the United States.

The Billikens dealt with the disappointing ending to the previous season by winning their ninth national championship in 1972, defeating UCLA in the finals by the score of 4-2. SLU finished the season with a record of 16-2-2.

Saint Louis University won their 10th NCAA title in 15 years in 1973 by defeating UCLA again by the score of 2-1 in an overtime thriller.

Dan Counce led the team with 11 goals and he was awarded the Hermann Trophy, making it five consecutive years that a Saint Louis University player was named the most outstanding college soccer player in the nation.

The 1973 title marked the end of Saint Louis University’s championship run. The Billikens lost the 1974 championship final to Howard University in a closely contested match by a score of 2-1.

In addition to these records, the Saint Louis University portfolio also includes the following:

A New Generation Carries on a Grand Legacy

In 2018, after posting the second perfect league record (10-0-0) in program history to win the Atlantic 10 Conference regular-season title, Saint Louis outscored its three opponents 11-2 to capture the A-10 Championship crown and the program’s third NCAA Championship bid.

Coach Shields was named  the 2018 A-10 Coach of the Year and recipient of the Carl O. Bauer Award, presented annually by the Missouri Athletic Club to the top amateur sports figure in the St. Louis area.

The 2019 Atlantic 10 Women’s Championship tournament will be held at SLU’s Hermann Stadium this November.