'Java with the Jesuits' Bring Billikens Together Online as ‘OneSLU’

While they may not have been enjoying a cup of cocoa face-to-face around Saint Louis University’s beloved Clock Tower, those attending the first Zoom “Java with the Jesuits,” came together as “OneSLU” with their favorite mugs of joe in hand. 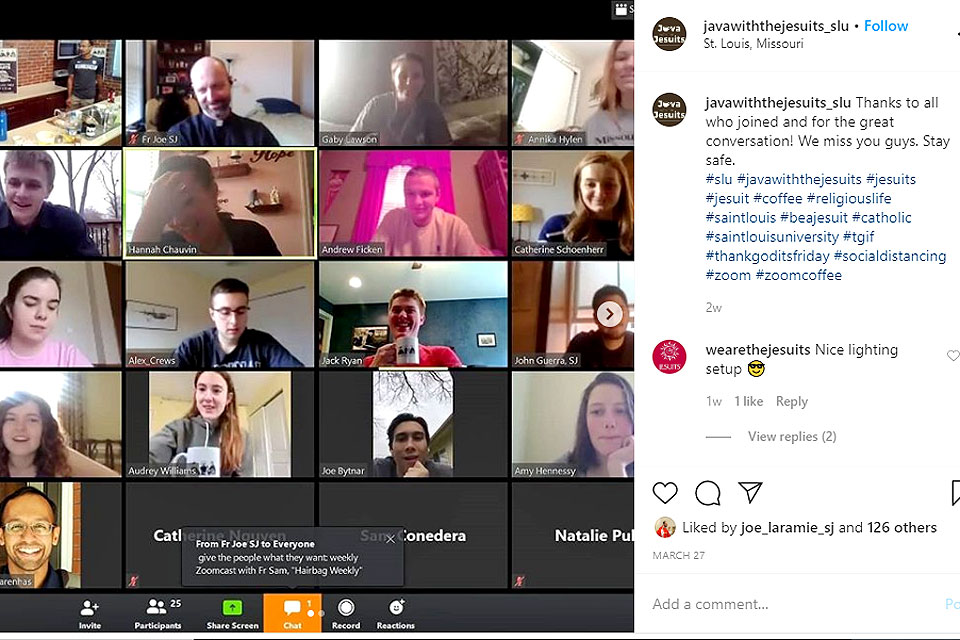 Billikens gathered on Zoom and Instagram to keep SLU's beloved "Java with the Jesuits" coffee and conversation series going during days of social distancing.

While Java with the Jesuits, SLU’s favorite coffee klatsch, usually meets in person for pastries and caffeine on-campus, due to the COVID-19 public health crisis, the SLU community has gotten creative to keep the tradition going strong.

More than 25 people joined SLU’s Jesuits and Jesuit Scholastics on Zoom and about 15 on Instagram for the first “Zoom Java with the Jesuits,” on Friday, April 3.

The current plan is to continue the Zoom gatherings on Fridays at 11 a.m. Central Standard Time (CST) on Zoom.

“Our goal is to create a space for people to be with each other,” Daniel Mascarenhas, S.J., a Jesuit Scholastic and organizer of Java with the Jesuits, explained.

“There are plenty of Zoom meetings for all sorts of events, but we wanted to make a meeting for people to just hangout, even when you don't know the other people," he continued. "That's what ‘Java’ is about on campus – to bring people from different groups together, and as a space for students to encounter Jesuits outside of religious settings. If there is a need, we will serve it.”

With Jesuit Scholastics live-streaming from their kitchen in the Bellarmine House near SLU’s Midtown St. Louis campus, Billiken gather vicariously to enjoy each other’s company and the virtual baking being conducted during the session.

We talk about finding God in all things. I like to remember that this includes finding God in people. In times of social distancing, the people element might be hard to find. So, we are trying to create a space where people can get together for the sole reason of being together. And when you do your Examen later in the day, you might recall God's movement in a conversation that happened at the “Java” Zoom meeting.

We are going for a sense of community and familiarity. Many online resources are created by people we do not know. And that can create a distance. When you see known faces, there is an instant connect or a sense of feeling at home. So, even though our production value is not high, we hope to make students feel at home.