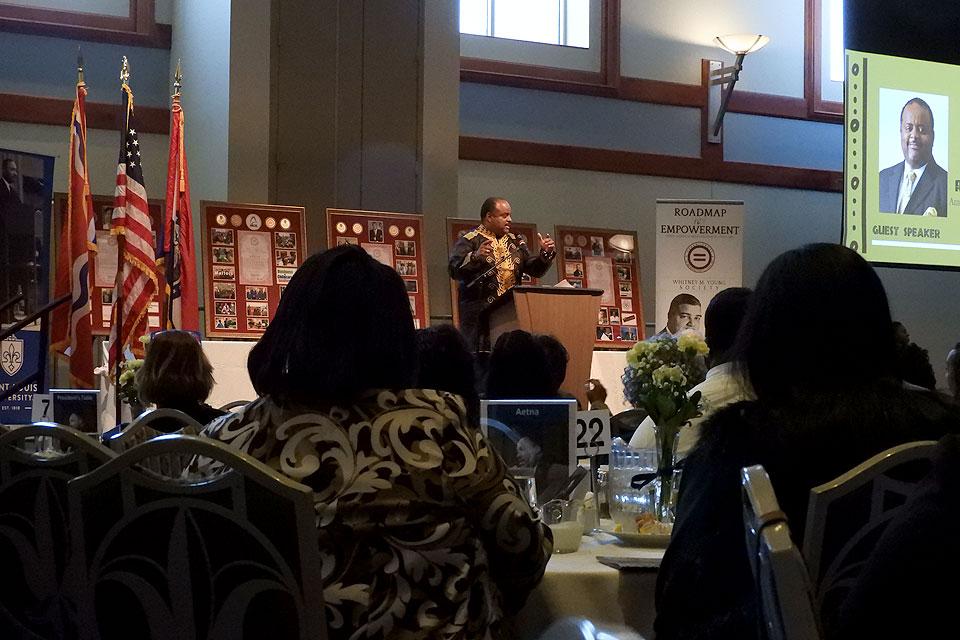 Keynote speaker, noted journalist and author Roland Martin, told the crowd in SLU's Wool Ballrooms that "leaders step up when it's time to lead," challenging those attending the tribute to King to recall the civil rights leader not as a mascot, but for his radical commitment to social justice and advocacy on behalf of economically, racially and socially marginalized.

"He was a man of more than giving speeches," Martin said. "Don't you dare quote Dr. King unless you are willing to live like Dr. King."

Following a prayer by Christopher Collins, S.J., assistant to the president for Mission and Identity, Jonathan Smith, Ph.D., vice president for diversity and community engagement at SLU, welcomed the crowd, as did SLU alumnus Michael McMillan, president and CEO of the Urban League of Metropolitan St. Louis.

McMillan applauded the University community and its commitment to racial equity, saying SLU, "never loses sight of its Ignatian mission of being men and women for others."

"SLU is with you, our community partners, in breathing life into the dream of a more just city," Pestello continued. "Each of you has kept the dream alive."

The breakfast tribute has become a SLU and Urban league tradition, drawing local leaders, advocates, students and members of the wider St. Louis community together. In 2018, Martin Luther King III, gave the event's keynote address, while in prior years, those gathered heard from civil rights legends like Ambassador Andrew Young. 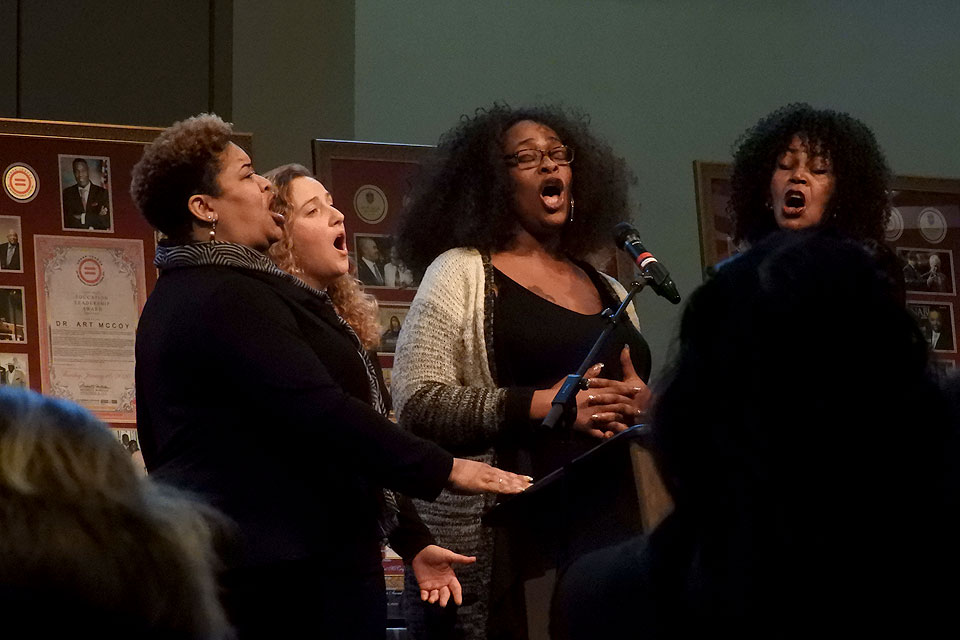 Returning to the stage, Smith gave a special presentation to the crowd, announcing SLU's new Institute for Healing Justice and Equity.

Led by faculty members Amber Johnson, Ph.D., Kira H. Banks, Ph.D., of the College of Arts and Sciences; Ruqaiijah Yearby, J.D., of the School of Law; and Keon L. Gilbert, Dr.Ph., of the College for Public Health and Social Justice, the institute is one of SLU's Big Ideas in Research that Smith said will lead the way in spearheading regional efforts to spark new projects related to transformative justice, equity and healing. 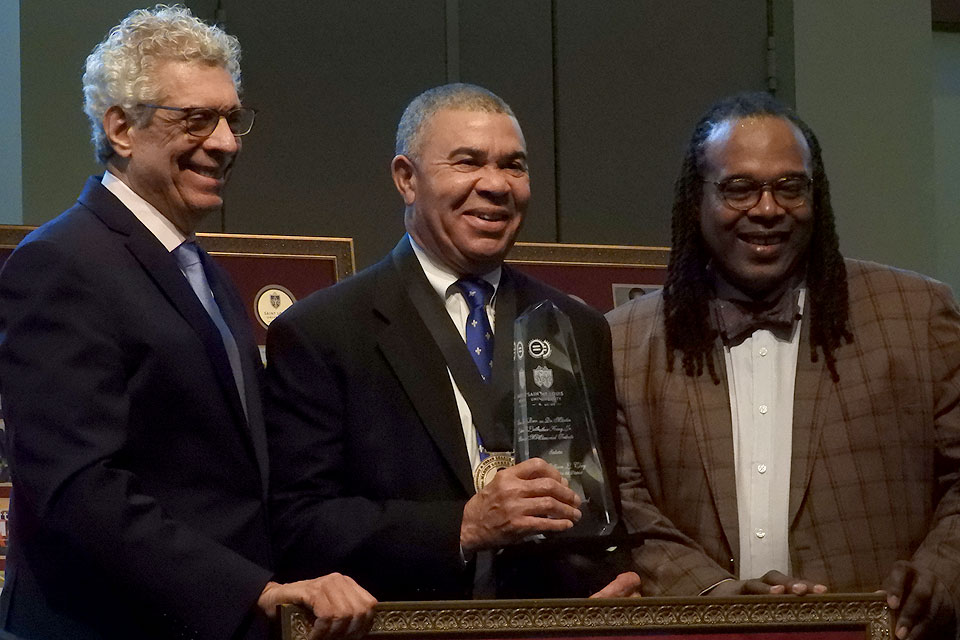 Denise Hooks-Anderson, M.D., associate professor of family and community medicine in the School of Medicine and SLUCare physician.

In accepting the award named for the long-time SLU dean, Anderson invoked her grandparents and noted, "To much is given, much is required. So I count what I do not as a job, but as a ministry."

Anderson was honored for her work advocating on behalf of those impacted by health disparities, poverty and inequality.

Organization of the Year Award

Area Resources for Community and Human Services (ARCHS) funds and strategically enhances initiatives that improve the lives of children and families facing disadvantages and disparities in some of the St. Louis area's most marginalized communities.

Accepting the award on behalf of his staff, board and clients, Wendell Kimbrough, ARCHS CEO, thanked his board and staff, noting the significant progress the organization had made in advancing its mission as well as its path forward.

Art McCoy, Ph.D., superintendent of the Jennings School District, was lauded for his commitment to children and his work propelling positive change in a district that has now seen two consecutive years of 100% graduation, career and college placement for its high school.

McCoy called for a renewed dedication from those assembled to advancing expanded mental health services and efforts aimed at healing deprivation and access issues across the community.

Acknowledging the debt owed to elder civil rights leaders, Congressman William Lacy Clay spoke of the power of King's legacy and its salience to America today.

He urged the crowd to embrace King's mission as their own, quoting the storied civil rights leader: "Anyone can be great because anyone can serve."

Accepting on his own behalf and that of his wife, Noémi Neidorff, Michael  Neidorff, president and CEO of Centene Corporation, also received a letter from the head of the national Urban League, Marc Morial, thanking him for his steadfast support of the organization's efforts, locally and nationally.

Morial's letter noted, "Your support is a source of continued strength."

As he began his keynote address, Martin warned the crowd, "God gave me the spirit of discomfort. It's my job to make people uncomfortable. And that's the kind of man Dr. King was."

Martin urged those gathered to recall King's attentiveness to issues including police violence and brutality, to economic inequality and political marginalization. 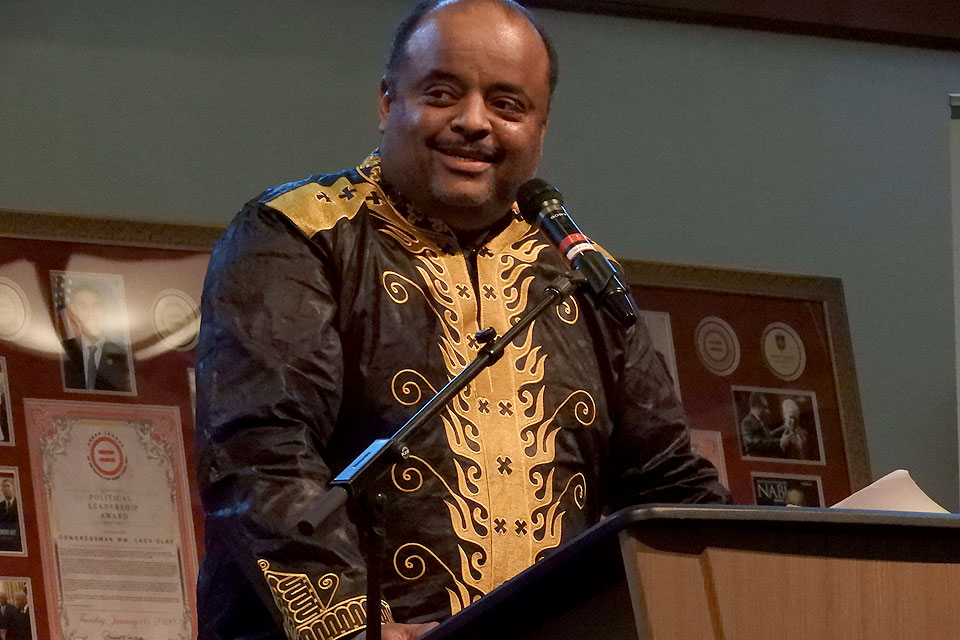 Political and civic engagement - and personal sacrifice - are more urgently needed than ever, he continued, and direct, sustained action on the part of every man and woman of conscious is necessary to bringing the true justice King advanced into being.

"We have the power to do, we have the capacity to do, but do you have the heart to do?" Martin asked the crowd. "It's time to get to work."