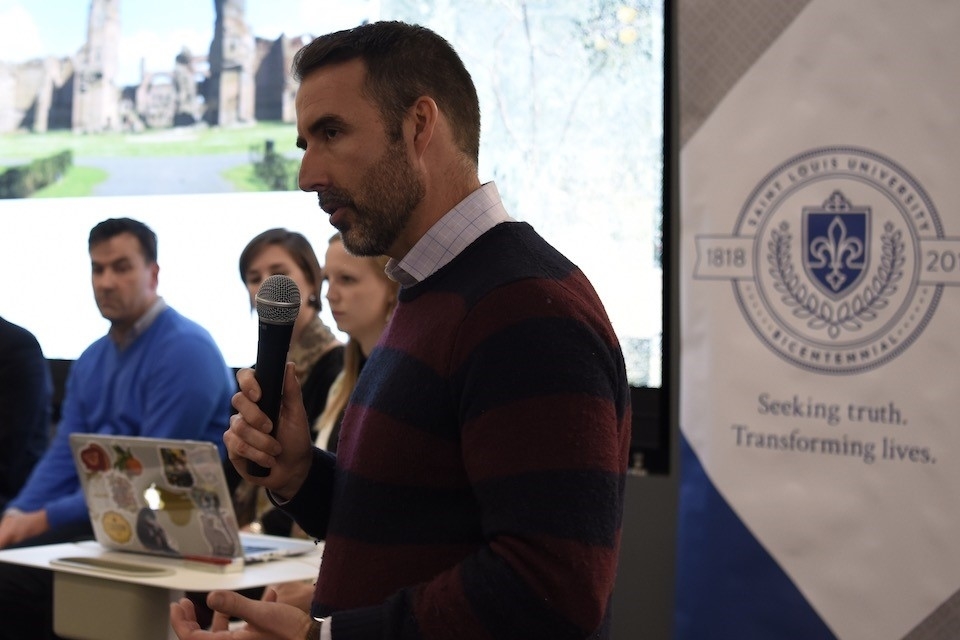 SLU historian Douglas Boin, Ph.D., recently published a biography of Alaric the Goth, the first king of the Visigoths who marched against Rome, sacking the city and helping to bring about the fall of the Roman Empire in the West. SLU photo

In his new book, Saint Louis University historian Douglas Boin, Ph.D., brings to life one of the most pivotal - and little understood - figures of ancient history, Alaric the Goth, to better understand the last days of the Roman Empire.

Boin, associate professor of history in the College of Arts and Sciences, teaches undergraduate courses in all areas of the ancient Mediterranean world, and teaches graduate courses on Greek and Roman history as well as the history of cities in Late Antiquity and the Early Middle Ages.

In addition to his new book, Alaric the Goth: An Outsider's History of the Fall of Rome, published in June 2020 by W.W. Norton & Company, Boin has written three other books on the social and cultural histories of the late Antique world, the ways Christians made a place for themselves and their religion in the Roman Empire and a social history of Ostia, a Roman harbor town.

Boin's writing has also appeared in The New York Times, on Time.com and he was recently interviewed on NPR.

His work as a historian, he says, is to teach students to be fearless scholars and to delve deeply into the past to engage with its lively stories and complex protagonists.

Tell us about your new book.

Around 2016, as I was finishing a major textbook on the end of the Roman Empire, which is the specific area of my research, I was thinking about how to communicate the ideas of that time to a wider audience.

The end of Rome is a period when the idea of world history really takes hold, in an exciting way, I think, especially in students’ minds, because it represents the first time when really far flung cultures and places, like China and Africa and Europe, start regularly encountering each other. I thought it would be neat to find a single life that brought that moment in world history to life. Alaric turned out to be the ideal person for it.

Who was Alaric the Goth and why should we learn about his life?

Alaric was a member of the Gothic people who grew up on the border of the Roman Empire, at the edge of the Danube River in what constituted the empire’s northeastern frontier. He immigrated to Rome, joined the army, and was on his way up in Roman society until several structural features of the age —including rabid xenophobia and religious bigotry against outsiders — forced him to change his plans. The story of his 40-year-life from ambitious boy to disaffected adult is what really captured my imagination.

What interested you in researching Alaric and his world?

To me, what was interesting was trying to tell the story of Rome — a really well known, well-studied topic — but through the eyes of an immigrant. That, in my mind, was a way to make ancient history feel interesting again because it turned the tables on who was important. People from the margins are not often put at the center of the story of the Roman Empire. I felt it was well past time to do so.

What was the most surprising thing you discovered about him?

Romans often whispered about Alaric that he acted more like them than a Goth. That line really hit me because it spoke to a really disturbing, discriminatory aspect of Alaric’s time that Roman historians had never really paused to reflect on before. While it was true that Gothic person could be accepted into society, even be promoted in a government job if he impressed Romans with the way he dressed, talked, or acted, there were hundreds of thousands of Gothic people who were mocked, sometimes even enslaved, because they valued their own culture or their own Gothic language or their native dress.

The Romans in Alaric’s day harbored a horrible sense of cultural superiority, and I think the thing I came to appreciate the most in telling Alaric’s story was how ingrained these terrible ideas were in the Romans’ minds.

Your book's sub-title is "An Outsider's History of the Fall of Rome." What does this vantage point tell about the past?

Fear of foreigners and Rome’s tenuous notion of what counted as “civilization” made it very difficult for any outsider to be accepted. Outsiders were stigmatized with words like “barbarian,” and everyone from the Roman elite to the Roman lower classes looked down and dismissed them. This book really emerged from my wanting to bring a sense of fairness and justice to the historical time.

Even though it was hard, and the sources were much thinner than I had hoped, it was important for me to let Alaric and the Goths have their voice.

How does Alaric's life resonate for us today?

One of the topics that defined Alaric’s life in Rome was the issue of citizenship: who had it, who could earn it, and who was denied it.

Ultimately, the Goths’ story and the story of what happened to the Roman Empire, including why it feel apart in 476 C.E., is a story about a political system that refused to incorporate foreigners into its state. The results its inaction were disastrous.

I don’t make any modern comparisons in the book. So I’ll let readers explore why that matters.

Suffice to say, I think history, even deep ancient history, is still incredibly relevant to us today. We just have to bring a fresh perspective to it, which I hope this book does.

How has your research informed your teaching?

Introductory history always used to be taught as a survey of “Western Civilization,” and in some places, that stale approach still predominates. I would like my students to encounter a broader global perspective even in their early history classes because I believe that understanding the multi-lingual, multi-ethnic and multi-racial of antiquity might make them better citizens, too. So even though I’m trained in Classics, with Latin and Greek and an ability to teach the Mediterranean from Homer to early Islam, I always try to incorporate different perspectives in my undergraduate courses. My research into the Goths came out of that desire to show my students that ancient history didn’t have to boring.

How do you see SLU's Jesuit identity and mission as carried out by your work as a historian?

As a product of a Jesuit high school in Chicago and of a Jesuit college, where I also taught prior to coming to SLU, I’d have to say there are two ideas which have most shaped my work as a historian.

First, I think I have come to appreciate how a rich, immersive sense of imagination really informs the way I think about the past. Ignatius always encouraged his followers to put themselves in a scene, like an actor inhabiting a part, and that practice, which I learned in high school, has really helped me empathize with people in history who might have been overlooked, like Alaric.

And the second aspect of my Jesuit education that has really defined my work is its emphasis on finding fulfillment in the broader world. Jesuits were smart, but they were also not monks. That model of a scholar fearless about engaging with society is one that does not fit the ivory tower picture of an academic, but I think it’s a perfect picture of Jesuit identity.

I love reading, any topic, and any kind of book: Shakespeare, literature in translation, novels, micro histories and global histories. Books were my world growing up. I’m fascinated by good stories and in awe of good storytellers. I’m also a historian.

Write Stuff is an occasional series of interviews with SLU faculty and staff authors who have newly-published or forthcoming books. To submit your work for possible inclusion in the series, email Newslink.