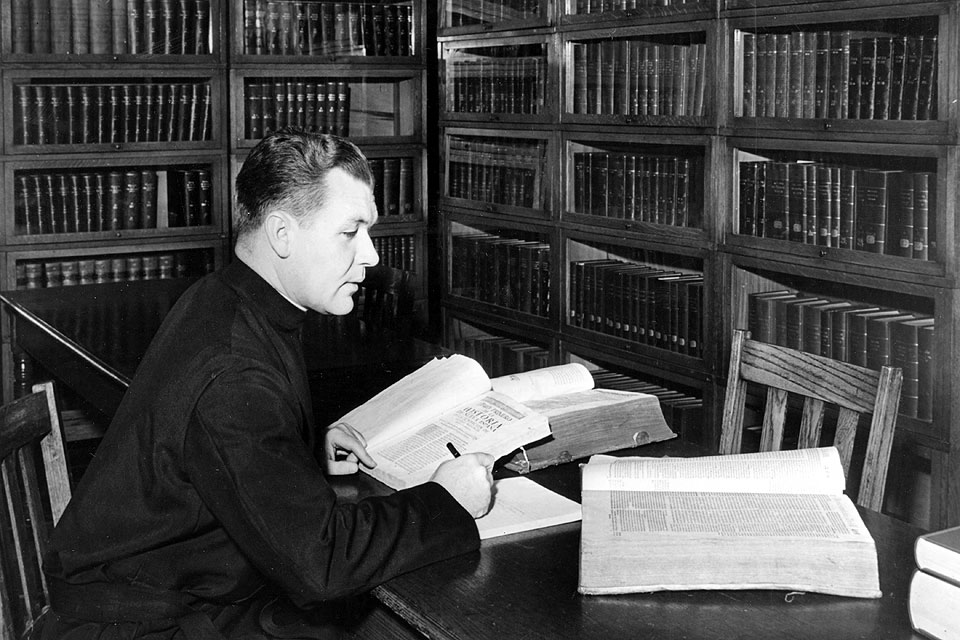 The West in His Blood

A fascination with the West seemed to run in the family as his younger brother, James, became an actor who played the role of Western hero Red Ryder on television.

After entering the Society of Jesus and his ordination as a priest in 1935, Bannon taught at colleges and universities in Kansas, Colorado and Wisconsin before undertaking graduate studies in history at the University of California at Berkeley (UC Berkeley). While there, Bannon caught the eye of historian Herbert E. Bolton, a renowned scholar of the Spanish borderlands. 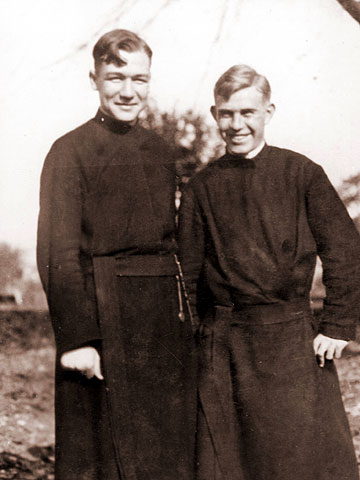 Bolton had been seeking a Jesuit to help him delve into work in the treasure trove of materials documenting Jesuit missionary activities in colonial Mexico. As they worked together, Bolton became Bannon’s mentor, eventually inviting Bannon to his “famous “Round Table” seminars.

In the spirit of Bolton’s work re-envisioning the Spanish borderlands, and focused on studying the work of the storied Jesuit missionary Eusebio Kino, S.J., Bannon traveled to and visited Sonora in keeping with Bolton’s plan of combining actual field work with the study of the many archival documents at the Bancroft Library at the UC Berkeley.

He earned his doctorate in history under Bolton’s tutelage in 1939. 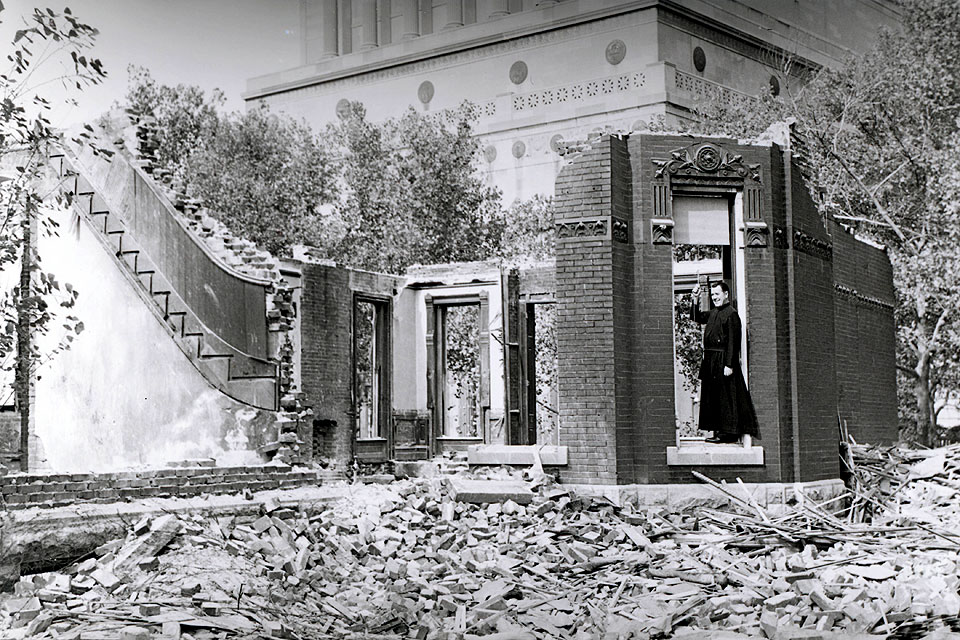 SLU historian John Francis Bannon, S.J., was known for his hands-on approach to delving into the past. Here, he investigates the University's former Bellarmine Hall as it was torn down to make way for new buildings on campus. SLU archival photo

After teaching history for the summer at the University of San Francisco, Bannon began his 34-year career as an active faculty member in SLU’s Department of History in the College of Arts and Sciences in the fall of 1939. In 1943, he became the department’s chair, a position he held for 28 years, before retiring in 1973 as professor emeritus of history.

As department chair, Bannon disliked what he considered administrative “red-tape” that interfered with the education of students. Throughout his teaching career, he developed warm personal relationships with his students, particularly with his graduate students. It was said that Bannon could remember the name of each one of his students, and he became a close friend to many over his nearly 30 years at SLU.

During his years at SLU, Bannon became an internationally recognized scholar. He authored more than a dozen books and hundreds of articles and reviews.

Two of his best known books were his two-volume History of the Americas, which was widely used as a text in many American universities, and Herbert Eugene Bolton: The Historian and the Man.

Bannon came to be recognized as an authority on the early trans-Mississippi West and colonial Latin America, and like Bolton, he regarded the histories of North and South America as inseparable parts of the story of the hemisphere as a whole. 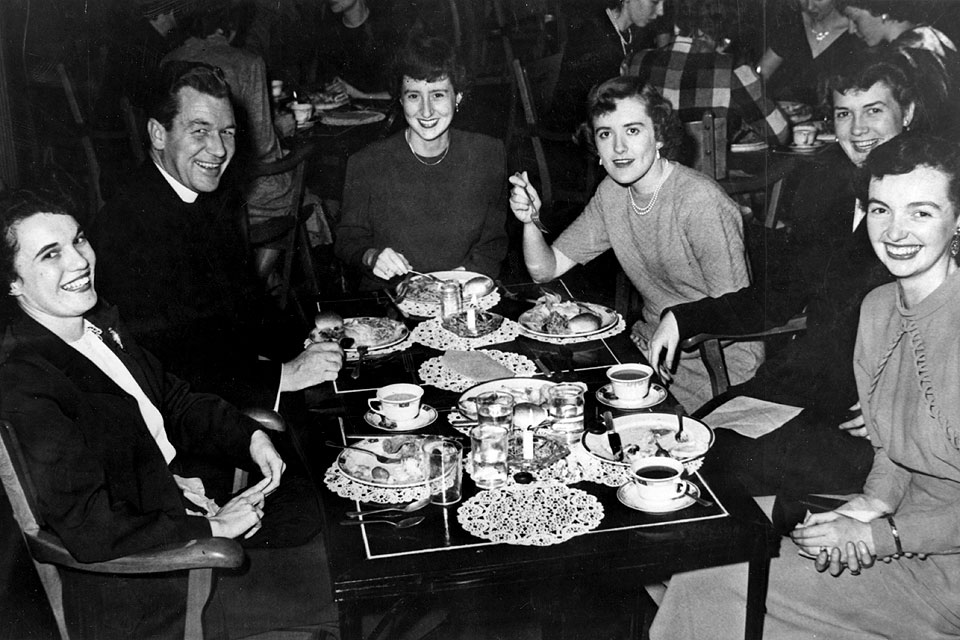 He served as program chairman of the Mississippi Valley Historical Society (later part of the Organization of American Historians) four times, and he hosted its St. Louis meeting in 1955.

Bridging the Past and Present for the Public

In addition to these more traditional scholarly accomplishments, Bannon became a household face for many St. Louisans and history buffs nationwide through his work in early educational television. 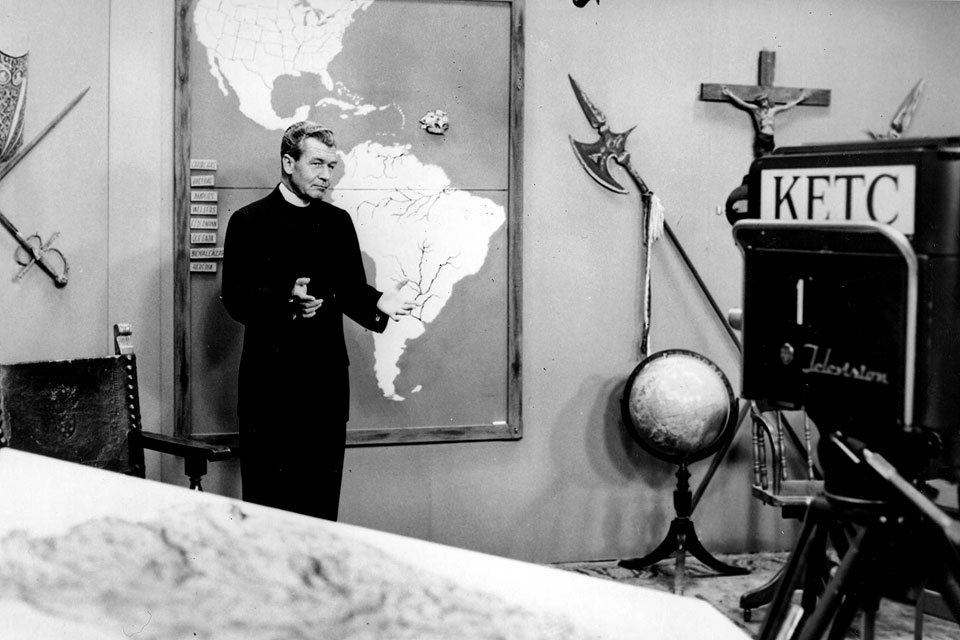 In 1954, working with KETC-TV Ch. 9, the first public television station in St. Louis, Bannon presented a series of thirty-six half-hour talks on the “History of the United States.”

As he did in his SLU classroom, Bannon set the scene for viewers as he told stories of the Western Hemisphere’s past, using a variety of maps, a teacher’s desk, crossed halberds, a crucifix, and the coat of arms of Spain and Portugal.

In 1956, Bannon created thirty more television programs on “The Great American West” which could be taken for academic credit at SLU. A year later, Bannon developed another series of programs on “The Latin Americas” for telecast in St. Louis and across the country.

Versatile and eager to reach diverse audiences, Bannon wrote two in-flight booklets for travelers on American Airlines: “History Below the Jet Trails” and “West to the River.”

Bannon formally retired from the history department in 1973. After his retirement, he remained intellectually active, holding the several visiting professorships, conducting research and writing about SLU history and the history of the Missouri Province of the Society of Jesus. He died on June 5, 1986, at age 81 in St. Louis.

But his legacy of scholarship and of sharing the stories and lessons of the past with the public lives on as the Department of History hosts its annual John Francis Bannon, S.J., Lecture.

And, in the spirit of his mentor, Bannon ensured that others could continue to explore the past through the artifacts housed in archives. After his formal retirement, Bannon served as “de facto” archivist for the University, collecting copies of University catalogs, bulletins, yearbooks, SLU publications, photographs and collections of academic papers of several Jesuit faculty members to preserve SLU’s story for future generations.

Today, the materials Bannon collected are constantly used by patrons and staff in the current University Archives.