Play to Learn: Through Collaboration, Students Gain Insight into Immigration System via Game

What does it feel like to be a child, alone in a migrant detention center? You don’t speak the language and you don’t know what will happen next or how to navigate the legal system you’ve just found yourself a part of.

Torrie Hester, Ph.D., and Kate Moran, Ph.D., wanted their students to put themselves in the shoes of those children, to understand what it might be like to be an unaccompanied minor in the custody of the the U.S, Office of Refugee Resettlement. 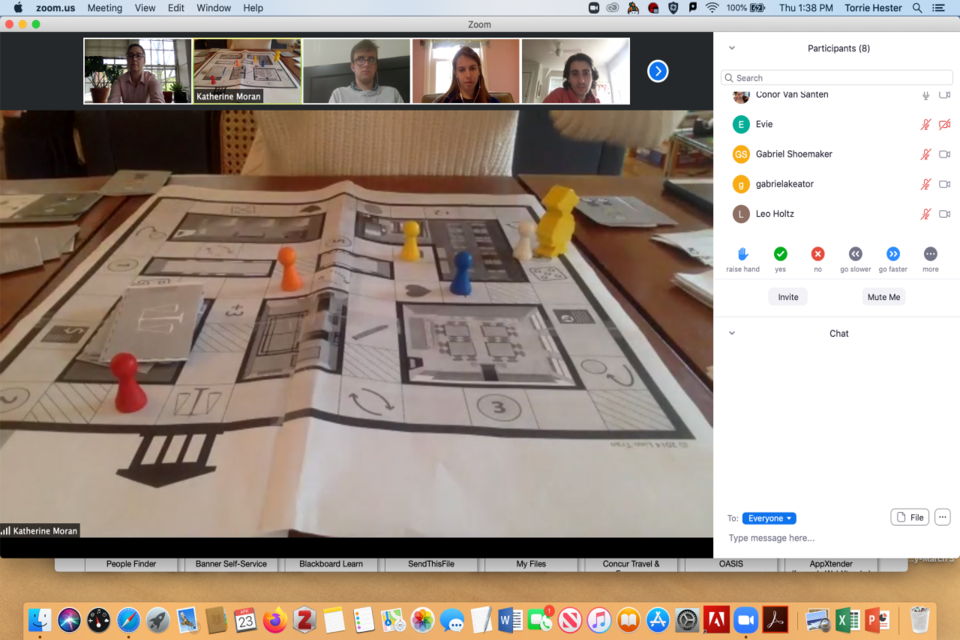 Students played the game Toma El Paso / Make a Move to teach them about the different pathways for release and what steps they need to take to make release possible, at home and connected online. Submitted photo

“Playing the game in class allows our students to get a sense of the ins and outs of U.S. immigration policy, and the bureaucratic challenges that children face in detention centers,” Moran, assistant professor of American Studies, said. “It also, I believe, humanizes what we hear about so much in the news: it asks them to place themselves in the position of a young migrant, without a guardian, trying to get out of U.S. detention.”

Once class went to distance learning due to the 2019 Novel Coronavirus (COVID-19) public health crisis, Moran and Hester realized that sitting around tables and playing the game was not going to be possible.

Reaching Out to Help Students Learn

When SLU instituted distance learning in March, Moran got in touch with the maker of the game, Lien Tran, MFA, an assistant professor of interactive media at the University of Miami in Florida. Tran is a social impact, game and interaction designer.

In response to Hester and Moran’s query, Tran created a printable version of the game that she is making available for free on the game's website, benefitting not only SLU students, but learners across the country.

“This printable, free version was inspired by our class’s needs, but is also available now for anyone to use,” Hester, associate professor of history, said. While the SLU faculty members offered to raise funds to purchase access to the game, Tran refused. Her goal, she said, was to make the game accessible to as large a group of people a possible.

Moran has used Toma El Paso/ Make a Move when teaching about immigration in “Investigating America: Intro to American Studies,” because it fits with her larger goal in that class: encouraging students to turn their cultural analysis skills to unexpected material, and encouraging them to think about how to better understand perspectives and experiences that are often left out of mainstream narratives of U.S. history and culture.

“It’s been fantastic,” Moran said. “It’s a complicated game, but that is by design because it is meant to help teach children in detention centers how to manage a complicated system.”

SLU students playing the game must not only collect documents that unaccompanied minors must gather to pursue legal entry into the United States, but also have to navigate challenges like connecting with a moving case worker figure.

In addition to playing with their classmates via Zoom, Moran and Hester’s students also played the game with their families , bringing the classroom into their homes, and added reflections via the course’s online discussion board about how the experience inspired valuable conversations in their families.

Sophomore Madison Paz played the game with her mother and younger sister, taking her family through the complex process unaccompanied minors face as they attempt to leave detention centers operated by the U.S, Office of Refugee Resettlement.

“There were setbacks and many obstacles that caused my family and I to get really frustrated but since we wanted to win, we kept playing,” Paz recalled. “This led to a discussion with my family about how UIMs go through these situations in real life and they need to keep going in order for them to get out of the detention center.”

For senior Liliana Mueller, the game led her to wrestle with the complicated feelings it evoked: playing a game that others must learn to manage their lives and their futures.

“In relation to bureaucracy, this game is a strong educational tool in understanding how inconsistent or unreliable the government can be in the case of each individual,” Mueller said. “It made me understand the reality of detention centers.”

“This board game not only taught me new information about immigration bureaucracy, but it also got me involved and wanting to learn again,” freshman John Scott Lacina explained. “I found myself immersed in this game and wanted to play out every option until I had seen it all. This game does a great job of teaching about the three different paths that children have when sent to an immigration center: reunification, voluntary departure, and federal foster care.”

“Each path you choose requires different prerequisites to attain that card, you must have lawyers to represent you and certain documents to prove where you may be going and so on,” Lacina continued. “The whole process of immigration bureaucracy is slow and time consuming, it can be a very long and drawn out process as any event in relation to the court system can be. Additionally, the board game does not make you a ‘winner’ at first chance, just like in the real world, you will face obstacles and challenges that will stop you from reaching your desired path.”

“Put in the shoes of a minor detained in an immigration detention facility, my co-players and I were tasked with navigating an often-opaque immigration system, and making our way out of detention,” Shoemaker said. “This game’s portrayal of the immigration bureaucracy is clear. From even just an hour of playing this game on Thursday, it became evident that not only was the bureaucracy opaque, something which is unfortunately to be expected, but also dangerously overstretched. The opacity of the immigration system is typified by the use of chance cards which can either help or hurt you regardless of your actions up to this point.”

For sophomore Johan Perez, the class’s readings, documentaries and the game opened his eyes to how his own family’s history has intersected with the U.S. immigration system.

“What really connected with me the most were the marches being carried out all over the U.S in response to the HR 4437 bill introduced by a senator from Wisconsin,” Perez said. “If this bill was to be passed, all undocumented Latino immigrants would be labeled as felons. That was in late 2005, and I was only 6 years-old but I have vivid memories of my parents always talking about something called ‘La Marcha’ (The March in Spanish).”

“I remember my parents always talking about this thing called “La Marcha” for days leading up to it,” he continued. “Of course, at that time I had no idea what a march was or why it was happening, but I knew it was something important. I did not attend but my entire family who lives in Chicago went to the March in Chicago. Afterwards, I never heard about it again. What's funny is that it wasn't until now, this exact moment that I watched this documentary that i realized what that was.”

“I can't believe I'm learning about something that actually relates to me and my family directly,” Perez explained. “My parents have never been into politics, nor do I ever hear them talk about politics whether it be from Mexico or the U.S., so I know that the marches of 2006 were a big deal. Seeing all the people protesting in the video brought tears to my eyes because I realized that my entire family were there. And I never knew about this because I was too young. The quote ‘There was something in that community that finally said: ‘We've had enough,’ really got to me, and I felt a sense of pride in my family.”

Taking Away Ignatian Lessons in Empathy

“It adds to the focus some students already have on migrant rights activism, which they have gained through numerous other courses at SLU as well as trips to the border and service work,” Moran explained. “For these students, it really fits in with their experience of SLU as a place where they can grow as people committed to service and activism.”

“And for other students, the game not only helps them better understand lessons that we’ve learned about the development of refugee and asylum policy, and deportation and detention practices, but it also involves quite literally practicing empathy in the classroom,” Hester said.

Want to Play the Game? Get it Here.