His discovery would save countless lives, often in their earliest hours.

One of Saint Louis University’s most significant scientists, Edward A. Doisy’s discovery of the importance of Vitamin K would alter the way that generations of children and other patients were protected from potentially fatal bleeding disorders.

His work also earned Doisy a Nobel Prize in 1943. 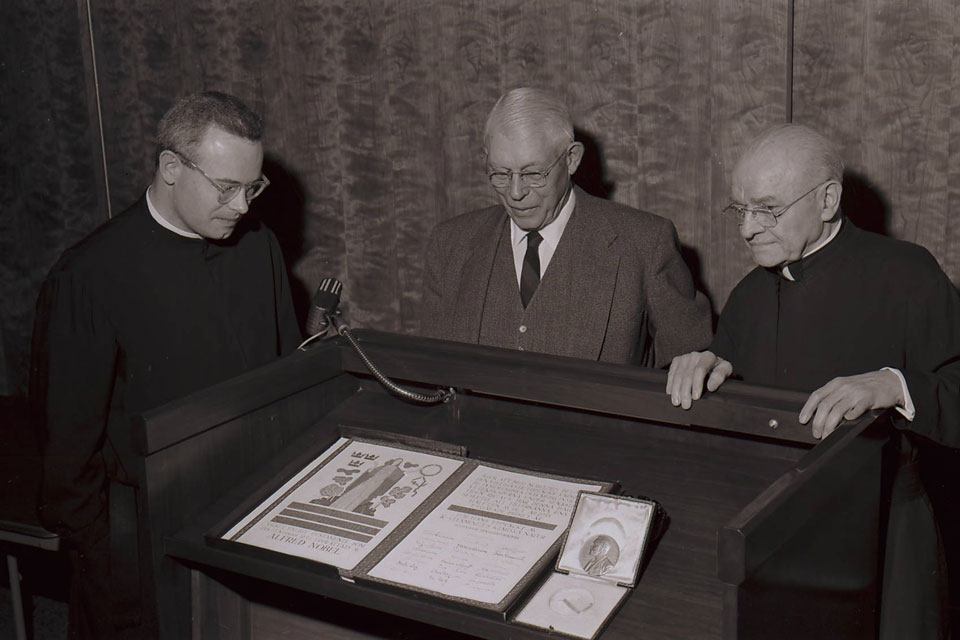 Edward A. Doisy, Ph.D. (center) showcases his Nobel Prize diploma and medal to SLU Jesuits including Alphonse Schwitalla, S.J., a storied leader in the history of the School of Medicine (right). SLU archival photo

Born in Hume, Illinois, in 1893, Doisy completed his A.B. and master of science degrees at the University of Illinois at Urbana-Champaign by 1916. While studying for his doctorate in chemistry at Harvard University, Doisy enlisted in the United States Army’s Sanitary Corps during World War I.

After completing his service, Doisy completed his doctoral work in 1920.

An Unlikely Inspiration Leads to a Nobel Prize

The Danish biochemist theorized that there was a yet undiscovered vitamin in certain foods that assisted in the coagulation of blood, and soon identified the substance he called “Vitamin K” as the active ingredient in stopping the bleeding. 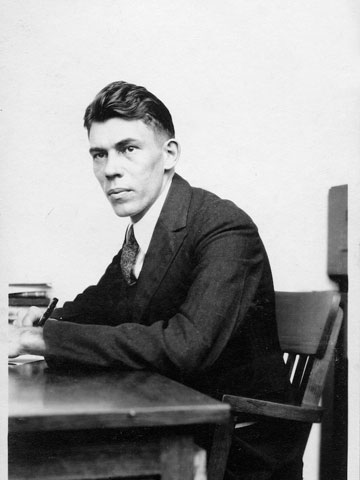 However, Dam was unable to isolate the substance.

Building upon Dam’s research, Doisy and his research team discovered that Dam’s vitamin K was actually two vitamins. The SLU team was soon able to identify the two substances’ chemical structures. Doisy and his team then developed a way to produce these vitamins synthetically, leading to a patent for the methods for producing Vitamin K.

Vitamin K was soon being used to prevent hemorrhaging in various situations and was considered a significant medical breakthrough.

Doisy and Dam were both awarded the 1943 Nobel Prize in Physiology and Medicine.

Today, newborns and infants are among those who routinely receive Vitamin K to guard against a rare but deadly bleeding disorder.

A Life Dedicated to Research 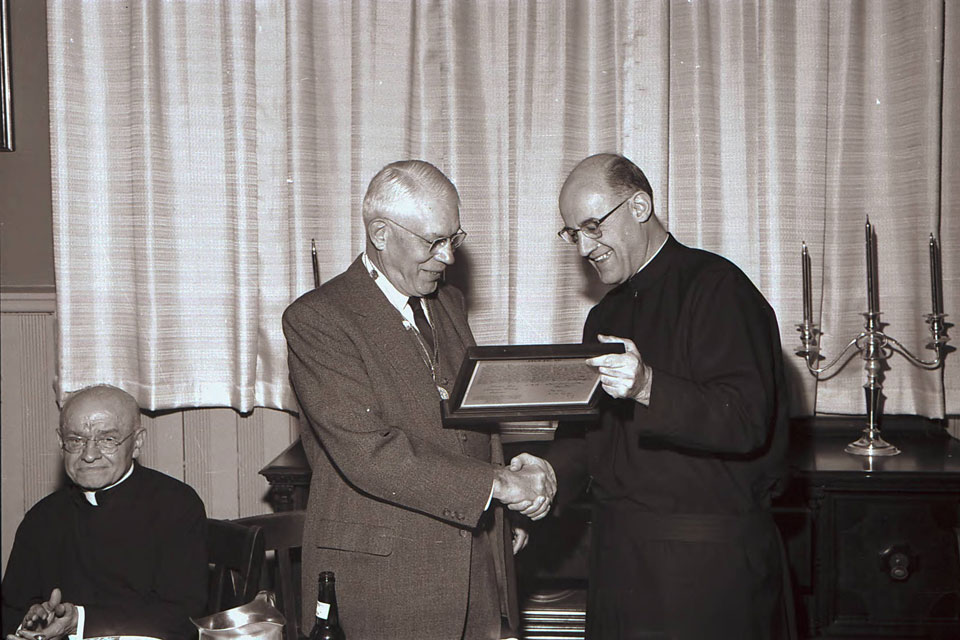 In addition to his work with vitamin K, Doisy’s other research improved the methods used for the isolation and identification of insulin. He also made important contributions to the knowledge of antibiotics and blood buffer systems.

Doisy also studied the female sex hormones known as estrogens. He and his research assistant, Edgar Allen, worked to isolate these hormones, and by 1936 they had succeeded in isolating three sex hormones: estrone, estradiol, and estriol.

A Legacy of Supporting Innovation and Scholarly Excellence

Throughout his career, Doisy received numerous awards and honors in addition to his Nobel Prize. He received the Gold Medal from the St. Louis Medical Society (1935), the Philip A. Conne Medal of the Chemical Club of New York (1935), the St. Louis Civic Award (1939), the American Pharmaceutical Award, and the Squibb Award (1944). 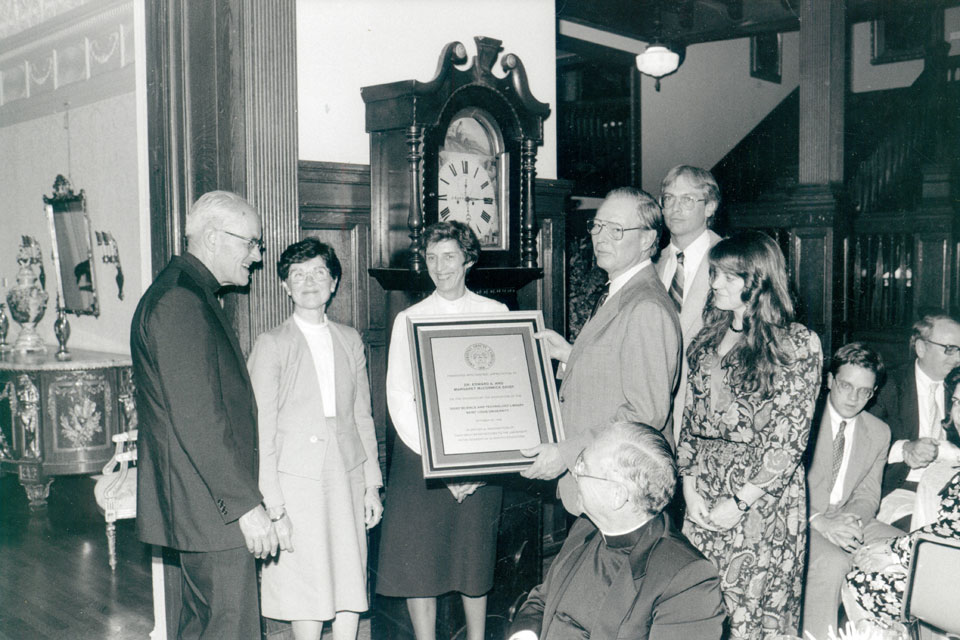 The Doisy family gathers with SLU leaders to honor the life and work of Edward A. Doisy, Ph.D.. SLU archival photo

In 1968, a research wing at the School of Medicine was dedicated to and named in Doisy’s honor.

Doisy and his second wife, Margaret McCormick Doisy, pledged $1,000,000 to the expansion and renovation of SLU’s Pius XII Memorial Library in 1986.

Following Doisy’s death in 1986 at the age of 98, his family endowed the Edward A. and Margaret Doisy College of Health Sciences. His widow, Margaret, dedicated the school.

SLU visitors can see artifacts from Doisy’s life and work as part of an exhibit on display in Schwitalla Hall.

A copy of Doisy’s Nobel Prize diploma hangs in a place of honor in the research center that bears his name. 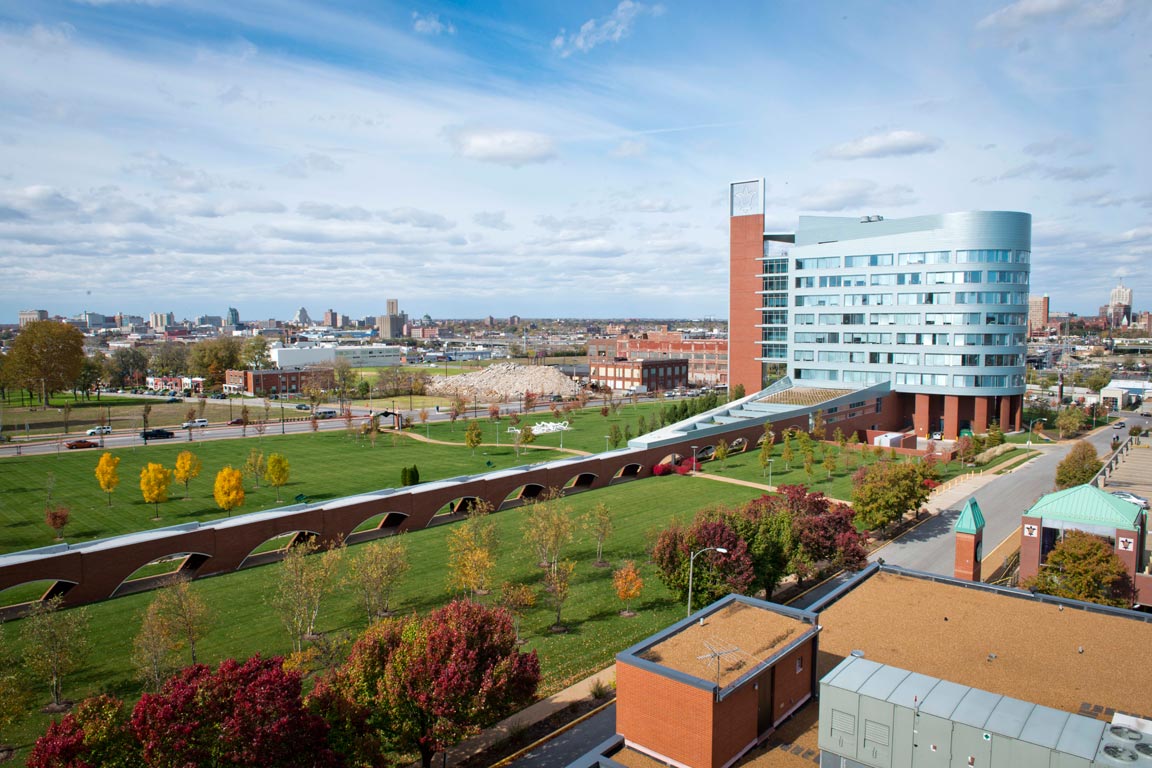