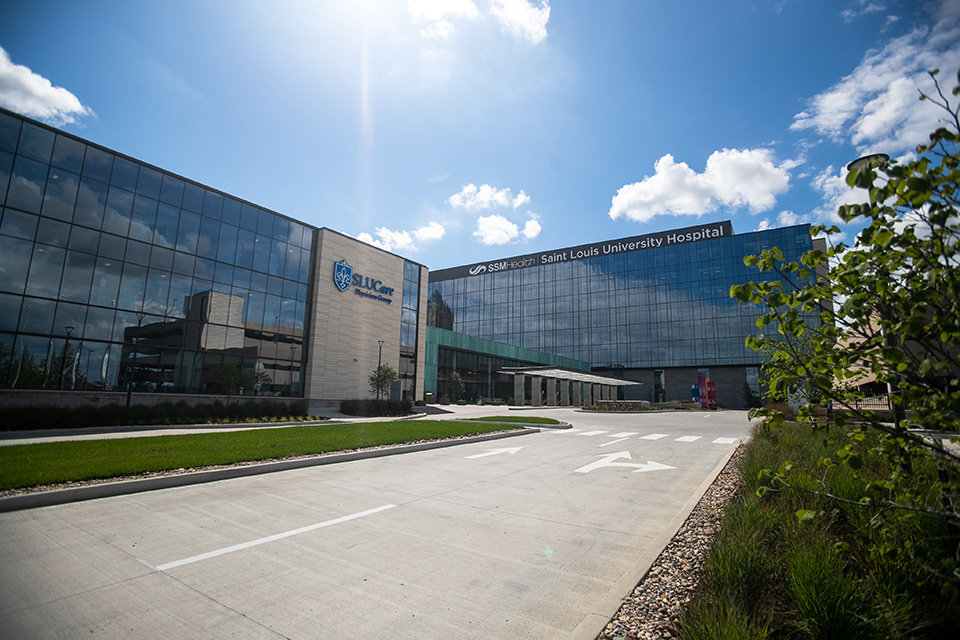 The completion of the new hospital comes five years after SSM Health announced plans to build the new facility next to the existing hospital, marking an expanded partnership between the University and SSM Health.

Pestello reflected on the decision to partner with SSM Health, a decision made early in his tenure at SLU.

“It was one of the first decisions I had to make as we were looking for a partner, and it became clear to us that SSM Health was the partner for us, sharing our Catholic values and mission,” said Pestello. “These two organizations always put patients first. So our patients will continue to get cutting edge medical care by compassionate clinicians in a state-of-the-art facility.”

“It’s transformational,” said Wilmott. “The students, the medical trainees and the faculty will be working in really outstanding brand-new facilities with state-of-the-art equipment, new technology.”

Construction on the project began in 2017. In 2019, SLU and SSM Health buried a 100-year time capsule at the site to be opened by future nurses and doctors in 2119.

The new campus elevates the patient experience and enhances the clinical offerings of SLUCare, the University’s academic medical practice.

Elledge, who joined SLUCare earlier this year, said the passion of the SLUCare and SSM Health teams has impressed him. “I’ve never been involved in a place that brings that loyalty and passion to the job every day,” he said.

A History of Care

The relationship between SSM Heath and the University extends back more than a century. In 1903, SSM Health’s founding congregation, the Sisters of St. Mary (now known as the Franciscan Sisters of Mary) welcomed SLU School of Medicine students into their hospitals for education and training.

In 1928, the University and the Sisters worked together to establish SLU’s School of Nursing. In 1933, the Sisters and SLU opened the hospital on South Grand Boulevard today known as SSM Health Saint Louis University Hospital.

Saint Louis University hospital continued to be owned and operated jointly until 1959, when the Sisters donated their share to the University. SLU sold the hospital to Tenet Healthcare Corporation in 1998.

In June 2015, SLU announced it would reacquire the hospital from Tenet Healthcare Corporation and would contribute the facility to SSM Health in exchange for a minority financial interest and governance rights in SSM Health St. Louis. The deal became official in September of that year.

The state-of-the-art Center for Specialized Medicine is an outpatient hub for SLUCare’s primary care providers and specialists. It is located on Grand Blvd., beside the new SSM Health Saint Louis University Hospital.

The Center for Specialized Medicine houses SLUCare providers’ offices which were formerly in the Doctors’ Office Building on Vista Ave., Salus Center on Lafayette Ave., or in the SSM Health Saint Louis University Hospital - South Campus building on Grand Blvd. at Interstate 44.