ST. LOUIS (May 10, 2020) — The high-profile physician leading the St. Louis region’s fight against COVID-19 will deliver this year’s commencement address at Saint Louis University, which is holding its graduation ceremony virtually for the first time because of the pandemic. 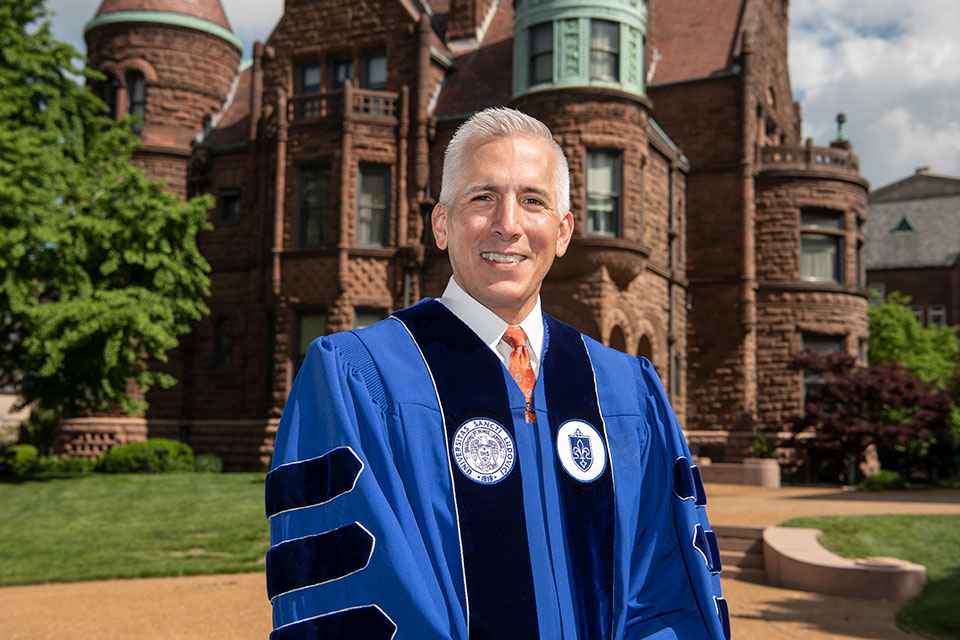 Alexander Garza, M.D., the incident commander of the St. Louis Metropolitan Pandemic Task Force, will speak to December 2020 and May 2021 graduates during a prerecorded event that will debut online at 2 p.m. Sunday, May 23. Garza is a SLU alumnus.

The chief community health officer of SSM Health, Garza was tapped in April 2020 to lead a coalition of the region’s four largest health care systems in a unified response to COVID-19. Garza has helped coordinate capacity, staffing and supplies. And he kept the public informed by hosting daily briefings on social media.

Garza’s career in health care started as an EMT, and he eventually worked at every level of providing care and leadership in emergency medicine. While serving as an ER doctor at a Kansas City hospital, he commuted to St. Louis on weekends to pursue a master’s degree in public health at SLU.

A colonel in the U.S. Army Reserve medical corps, Garza was deployed to Iraq in 2003 with a civil affairs team to rebuild hospitals and clinics. After returning home, he received the Bronze Star Medal for Meritorious Service, the Combat Action Badge and the Valorous Unit Citation.

In 2009, Garza was appointed by President Barack Obama and confirmed by the U.S. Senate to serve as the assistant secretary and chief medical officer of the U.S. Department of Homeland Security. In that role, he helped lead the federal government’s response to the H1N1 pandemic.

In 2013, Garza returned to his alma mater to become the associate dean for public health practice and an associate professor of epidemiology at SLU’s College for Public Health and Social Justice. In 2016, he left SLU for SSM where he also has served as chief quality officer and later chief medical officer of the health system.

In addition to delivering a commencement address, Garza will join four others in receiving honorary doctoral degrees from Saint Louis University this year. 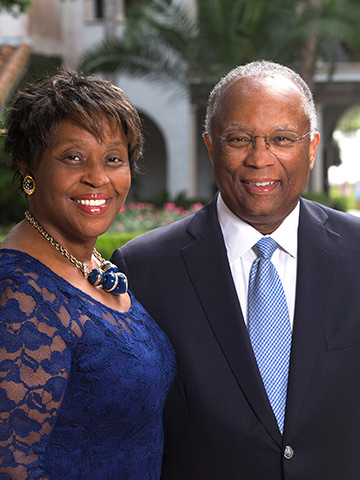 Brenda and Larry Thompson are being recognized with honorary degrees for their dedication to collecting, sharing and preserving African American works of art. Brenda is a SLU alumna, earning her doctorate in clinical psychology from the University in 1980.

The noted art collectors donated 100 works of art celebrating African American culture and experience to the Georgia Museum of Art in 2012. They later funded an endowment to support a curatorial position at the museum that focuses on African American and African Diasporic art.

Their generosity has extended to SLU as well. They have donated 55 pieces of artwork by African American artists to the Saint Louis University Museum of Art. They also recently established the Larry and Brenda Thompson Graduate Scholarship to support English, American studies or history students at the University who have an interest in art by African-American artists. 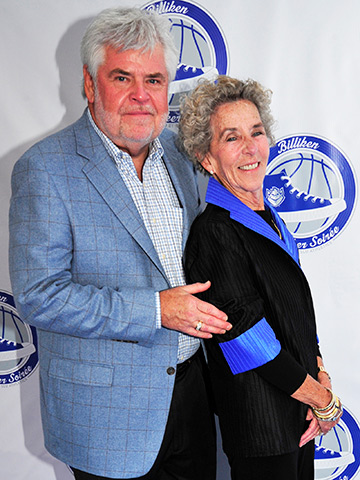 Linda and Alan Vogt are being honored with honorary degrees for their longtime support of Billiken athletics and student-athletes at Saint Louis University. Alan is a 1969 graduate of SLU’s Richard A. Chaifetz School of Business.

Over the past 25 years, the couple has made significant contributions that provide essential resources to all student-athletes at SLU, including academic support services, nutrition programs and campus life activities. In 2017, they received SLU’s Bauman Sportsmanship Award and were inducted into the Billiken Hall of Fame.

In addition to their involvement with Saint Louis University and Billiken Athletics, the Vogts also are actively committed to the Lutheran Elementary School Association, Longmeadow Rescue Ranch of the Humane Society of Missouri, the Police Athletic League and Unity Lutheran School in East St. Louis.

Donald Linhorst, Ph.D., M.S.W., a social work professor who joined the University’s faculty in 1997, will serve as the mace bearer for the main commencement ceremony. Jori Brewer, an occupational therapy major and the outgoing president of SLU’s Black Student Alliance, was selected to be this year’s student speaker.

While commencement will be a pre-recorded virtual event this year, the University will host in-person precommencement ceremonies by individual college and school for the graduating classes of December 2020 and May 2021.

The precommencements will be held May 18-22 in Chaifetz Arena. Each ceremony will be capped at 250 graduates who may bring up to two guests. Graduates and guests will be required to wear masks and keep a safe distance from others while in the arena. The events will be livestreamed for loved ones to view at home.

Scheduled for 5 p.m. May 16, the annual Baccalaureate Mass will have both in-person and livestream options this year. Registration for the in-person Mass in St. Francis Xavier College Church has been capped at 160 students.

For more information on this year’s commencement activities, visit slu.edu/commencement/2021.