The goal of the five-year research project is to integrate plant traits, communities, and the soil ecosphere to advance restoration of natural and agricultural ecosystems. 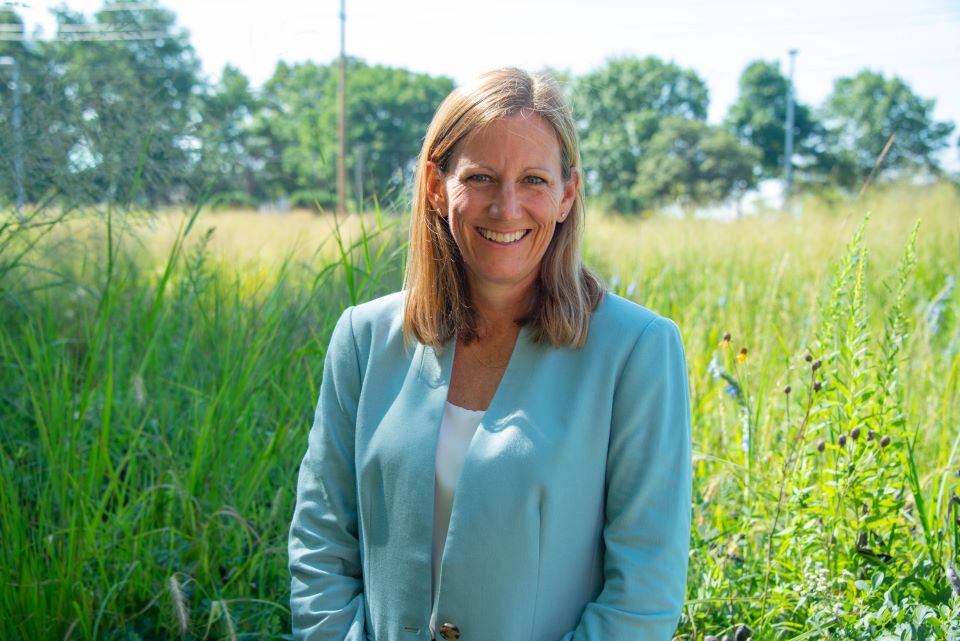 “The New Roots for Restoration Biology Integration Institute offers an incredible opportunity to revolutionize the way in which we approach restoration of human-impacted landscapes by focusing on both natural and agricultural ecosystems in tandem, and by applying cutting-edge technologies used primarily in annual grain crops to wild plant species and perennial crop candidate species,” said Miller. “We are equally as excited about the opportunities for recruitment, training, retention, and placement of the next generation of scientists, with a focus on persons excluded because of ethnicity or race (PEER) who will build their careers working across disciplines to restore wild landscapes and restructure agricultural systems for long-term sustainability.”

In addition to the Danforth Center, the NRR-BII includes Saint Louis University and the Missouri Botanical Garden’s Shaw Nature Reserve, home to one of the Institute’s seven field sites.

During this project, Stylianou’s research group will produce a mobile-phone based plant phenotyping application, and develop computer vision and machine learning approaches to extract plant phenotype information from data collected by that application. 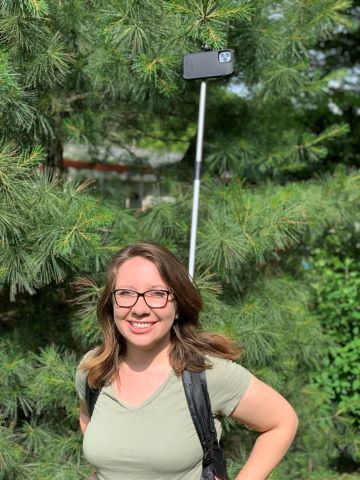 Abby Stylianou, Ph.D., assistant professor of computer science, showcases the  prototype "backpack phenotyper" that  her team is developing for this project. Submitted photo.

“A major strength of the proposal and the Institute is the engagement of Abby,” Miller said. “Her computer vision app will facilitate in-field phenotyping of a diversity of plant species both in St. Louis and in other institute field sites.”

Building on the strong phenotyping capacity of the Danforth Center, the Institute establishes nine expertise cores to support scientific activities and training. It bridges to population and community ecology through the Chicago Botanic Garden and the University of Kansas, and to plant evolutionary genetics and agriculture through the University of Vermont, University of Missouri, and The Land Institute in Salina, KS.

Land-use conversion, including both urbanization and agriculture based on cultivating a single crop in a given area, has impacted an estimated 75 percent of lands globally, and has contributed to the loss of approximately 50 percent of the world’s topsoil in the last 150 years. Central to the development of future food production systems are urgent questions of climate resilience, fossil fuel dependency, and the reversal of soil degradation.

The North American prairie - a breathtaking, expansive ecosystem that stretches from Montana to Texas, and from Colorado to Indiana inspired the formation of the NRR-BII. What components of this natural ecosystem have allowed the prairie to sustain itself for thousands of years? The prairie comprises long-lived (perennial) plants growing together in diverse assemblages that build soil and the soil microbial community.

The project team believes that prairies offer a valuable model for human-mediated ecosystems of the future, including both restored wild lands, as well as re-imagined agricultural landscapes that mimic natural ecosystems and serve as a basis for the core question motivating their research; can we restore critical ecosystem functions to our wild and agricultural lands?

Specifically, the research team seeks to answer basic questions including why are wild plant communities so diverse? Why are diverse plant communities more productive and what determines the rates of carbon sequestration in soil? Plants are unusual in that half their bodies exist above-ground, in air, while the other half lives below ground, in soil. NRR-BII scientists believe part of the answer to advancing restoration lies underground, in the understanding of how root traits influence plant interactions with each other - and with the soil. Through their research, NRR-BII scientists will provide insights into species coexistence and community assembly, information that can be utilized to guide reconstruction of native and agricultural systems and mitigate anthropogenic effects on terrestrial ecosystems.

The NRR-BII places detailed understanding of plant organismal systems in the context of populations, communities, and the soil ecosphere. Through their root systems, plants connect above ground components of terrestrial ecosystems to the soil, yet we lack a basic understanding of how plant traits, from shoots to roots, govern these connections. The NRR-BII will focus on the overarching theme of how parts of the plant roots and shoots relate to one another, how they vary across individuals, populations, and species, and how those relationships influence and are influenced by plant communities and the soil ecosphere, including both the soil and its microbial community. 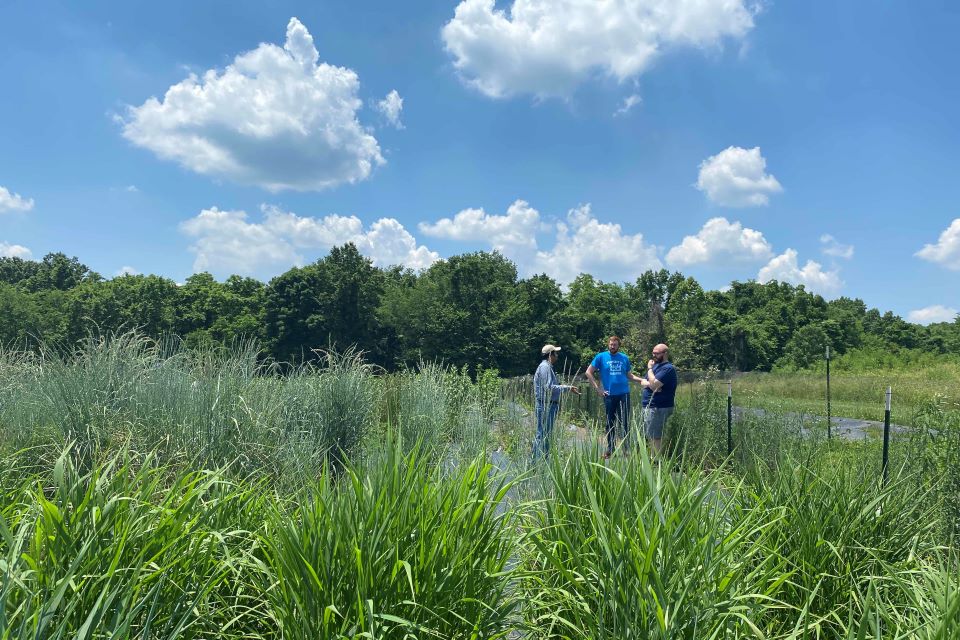 A spaced plant nursery of wild perennial, herbaceous species and perennial crop candidate species that will be used as part of the NRR-BII. Photo courtesy of the Danforth Plant Science Center.

The NRR-BII focuses research activities on long-lived (perennial) plant species in three ecologically and agriculturally important plant families. Perennial plants are dominant features of wild landscapes and promising components of future agricultural systems that mimic nature. What are the genetic and environmental forces that determine perennial plant phenotypes?  And what are the influences of perennial plant phenotypes on community and ecosystem properties?

The NRR-BII unleashes the Danforth Center’s state-of-the-art Bellwether plant phenotyping capacity and computational power approaches used so far primarily in model systems and annual crops, and will apply them in field and greenhouse experiments with perennial species. These approaches facilitate quantification of plant traits including imaging and analysis of above-ground phenotypes, below-ground plant phenotyping including mesocosms and X-ray, CT scanning, and a pipeline that quantifies elemental concentrations in leaves and other tissues, providing a proxy for root system function. The Danforth/SLU team will also develop an iPhone app for above-ground phenotyping.

To advance restoration, the NRR-BII will improve prediction of below-ground functional traits based on above-ground phenotypes. It will accelerate selection of robust perennial ecotypes for use in restored wild landscapes, as well as breeding of perennial crops like intermediate wheatgrass and alfalfa, for use in re-imagined agricultural ecosystems that mimic the prairie in diversity and perenniality.

In addition, a primary goal of the NRR-BII is to revolutionize training the next generation of scientists. Restoration requires a diverse, nimble workforce that understands relationships between plants, communities, and the soil ecosphere, and that can work at the intersection of agricultural and natural systems. The NRR-BII leverages the Danforth Center’s well-established education research lab programs and partner institutions, and constructs highly integrated education, training, diversifying, and outreach activities intentionally designed with many points of entry and ready mobility across participating labs and institutions.

Each year, NRR-BII members will participate in extensive training in leadership, mentorship, equity and inclusion and create/renew an agreed upon list of norms that will lead to a code of conduct to support “PEER” trainees.  Every summer, labs will host six to seven undergraduate research interns through existing programs. Interns will also have mentorship, leadership, and DEI training. Trainees will attend workshops run by NRR-BII experts to learn cutting-edge research techniques to computationally analyze images of both above and below ground plant phenotypes.

Through existing partner programs based at the Saint Louis Science Center, the Chicago Botanic Garden, and other partner institutions, interns and senior mentors will give outreach talks at local high schools to discuss STEM careers, college readiness and NRR-BII research. Five to 10 high school students will be recruited to participate in a six-week paid summer internship as part of the outreach program. High school interns will be mentored by undergrads, who in-turn will be mentored by senior mentors in the lab. This near-peer mentoring scheme lets students put their mentorship training into practice and build leadership skills.

Founded in 1998, the Donald Danforth Plant Science Center is a not-for-profit research institute with a mission to improve the human condition through plant science. Research, education and outreach aim to have impact at the nexus of food security and the environment, and position the St. Louis region as a world center for plant science. The Center’s work is funded through competitive grants from many sources, including the National Science Foundation, National Institutes of Health, U.S. Department of Energy, U.S. Agency for International Development, and the Bill & Melinda Gates Foundation. Follow us on Twitter at @DanforthCenter.

Founded in 1818, Saint Louis University is one of the nation’s oldest and most prestigious Catholic institutions. Rooted in Jesuit values and its pioneering history as the first university west of the Mississippi River, SLU offers more than 12,000 students a rigorous, SLU offers more than 12,000 students a rigorous, transformative education of the whole person. At the core of the University’s diverse community of scholars is SLU’s service-focused mission, which challenges and prepares students to make the world a better, more just place.