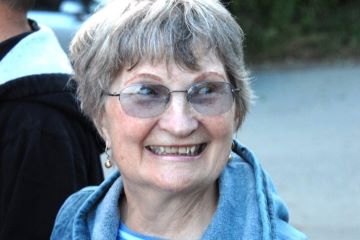 Shirley Mescher was born in Carroll, Iowa, on Aug. 11, 1930. In 1952, she graduated from Mercycrest College in Davenport, Iowa. It was during college that she met her husband, Wayne Loui, who attended nearby St. Ambrose College.

Loui began her career as a reporter for the Quad-City Times. Wayne and Shirley married in 1952 and had five children in Iowa before moving to St. Louis in 1962, where their final child was born.

Loui enrolled in the Comparative Literature program at Washington University at the age of 46, earning her Ph.D. in 1987 at age 56, with a dissertation on the many analogies she found between Lady Murasaki’s 11th-century classic of Japanese literature, The Tale of Genji, and Marcel Proust’s Remembrance of Things Past, a monument of French literature written 900 years later.

A revised version of Loui’s work, Murasaki’s Genji and Proust’s Recherche: A Comparative Study, was published by Edwin Mellen Press in 1991.

Loui joined the American Studies Department and became a mentor to scores of graduate students. In 1995, when the program was designated a department, she took over leadership for four years.

“Tuck’s unyielding emphasis on personal development and social justice left an enduring imprint on the culture of her department,” said Matthew Mancini, Ph.D., professor emeritus of American Studies. “Her guidance extended to her faculty colleagues as well, as her unshakable charity was blended with a worldly wisdom derived from a long, rich life outside academia.”

Loui’s interest in international studies and American Studies together bore fruit when she led SLU to charter membership in the Maastricht Center for Transatlantic Studies in Maastricht, The Netherlands, in 1996. This collaboration with American and European universities provided international experience not only to SLU students and faculty but also to faculty and students from many disciplines from the United States, the United Kingdom and Central Europe.

A longtime parishioner at St. Francis Xavier College Church, she also volunteered with the church’s Outreach Program. Loui aided low-income and unemployed people who needed to obtain birth certificates or other forms of identification.

Loui was proceeded in death by her husband Wayne Loui on Jan. 29, 2021. She is survived by her children, Anne (Andrew), Jen, Michael, Amy, Suzanne (Rob) and Kip (JJ); and eight grandchildren, Aaron, Benjamin (Katie), Tyler, Nicholas, Gwyneth, Marina, Meredith and Max. Her first great-grandchild is due in May.

The Loui family will hold a memorial in late spring/early summer.